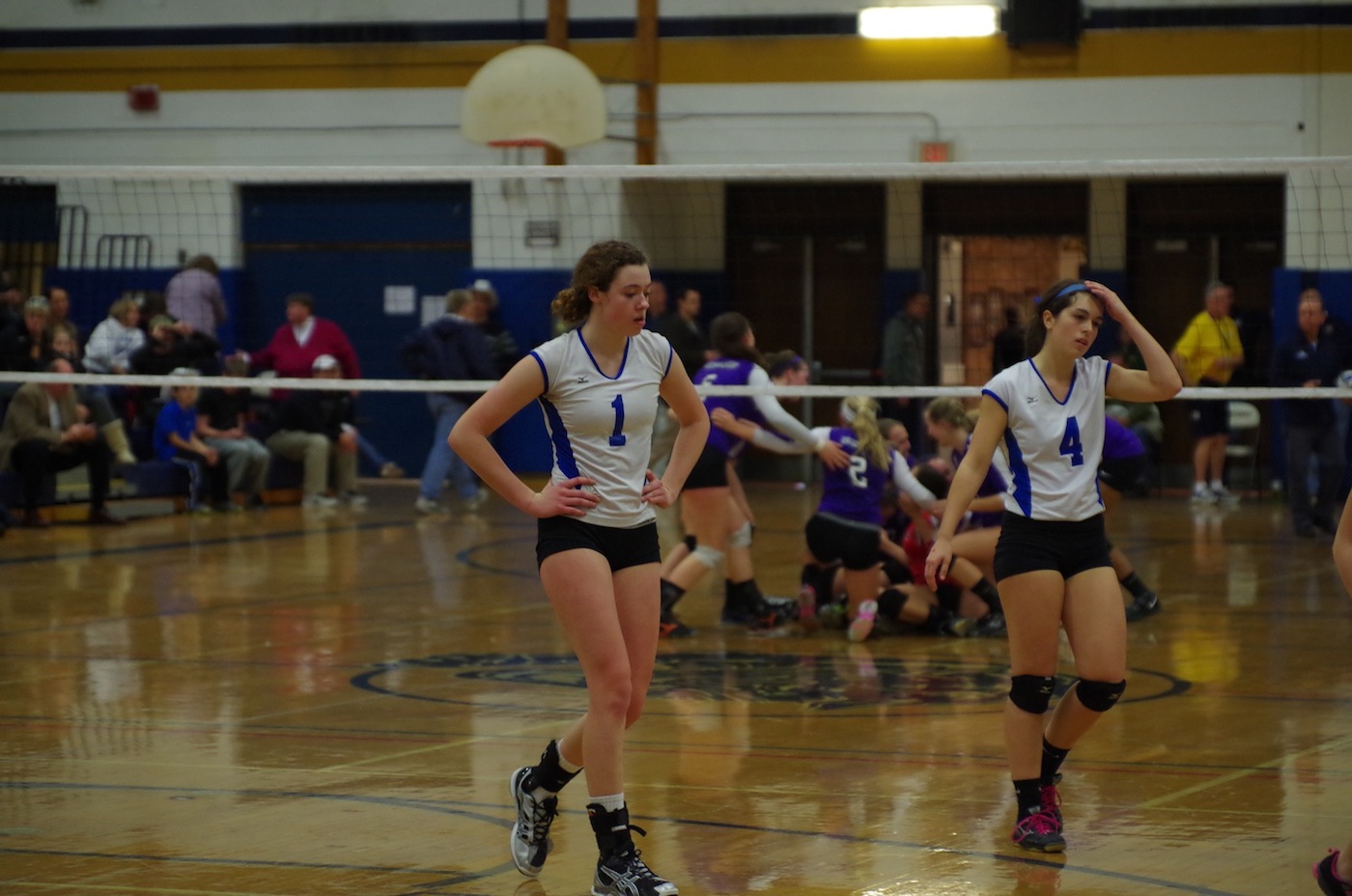 Article and photos by Larry Austin

Only five points separated Grand Island and Hamburg in Tuesday's Section VI Class A girls volleyball finals, but the Bulldogs were able to turn the slim margin into a 3-1 victory.

Ten seniors for the Vikings played their last game for the Blue and White.

"I don't know if I'll ever have another class like that," GI coach John Head said after the game. GI was the top seed in the tourney.

Tied at 23-23 in the first game, Hamburg closed out the frame with two kills, the final ball luckily finding a bare spot on the Vikings floor after ticking the net cord.

In the second game, GI built an early 10-5 lead before Hamburg went on a 10-2 run that included five straight points on Lauren Moelbert's hard jump serve. GI recovered to tie the game at 15, and the teams traded points to 20-20 when the Bulldogs closed out the Vikings, 25-22.

"We knew what their strength was. They've got tough servers, and we didn't handle that as well," said Head. "Our first touch didn't get the ball in the system enough and they took us out of offense."

Only the third game was squarely in one team's favor throughout. The Vikings jumped out to a 13-6 lead in the game and went on to a comfortable 25-19 win.

"Grand Island did a nice job of adjusting after game two," Hamburg coach John Crangle said. "They moved some blocking schemes around, so in game 4 we adjusted to that. We moved a couple girls out of rotation and we called a couple different offensive schemes, and for the girls to carry out those schemes and be able to recognize when to do it and do it effectively really separated us from Grand Island in game four."

GI trailed most of the fourth game until back-to-back kills off the block by Al Brown tied the game at 14. Hamburg replied with three straight points and never led by fewer than three points the rest of the way, closing out the Vikings 25-19 to win the match.

Crangle said experience was a factor in the overall outcome. The Bulldogs were making their fourth straight Class A finals appearance and won their third title.

"These girls have been in this position before," Crangle said of the Bulldogs. "And they've been in pressure situations, and they know how to react and when to react, and it was evident tonight the way they kept their composure, the way they adjusted the game plan."

Crangle said his team never hit the panic button despite the Vikings presenting plenty of opportunities to do so.

"They really removed the crowd, they removed the pressures of this game right out and were able to execute with a clear head."

Head praised his team's effort in defeat. "They played hard. You're down 2-nothing and they're still battling and they're still taking games. They won that third game, and that fourth game was anybody's right up to the end there. They keep fighting and that's all you can ask for."