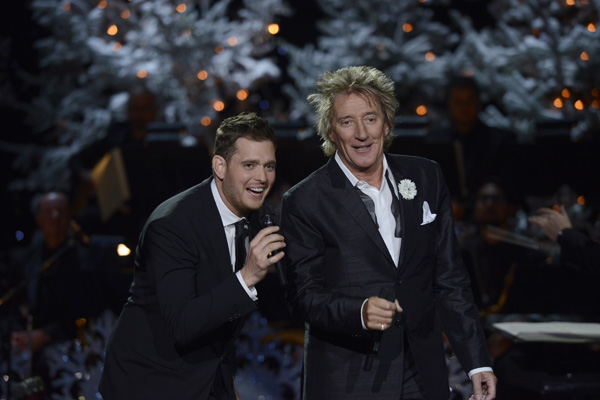 Michael Bublé, left, performs with Rod Stewart as part of "Michael Bublé: Home for the Holidays" on NBC. (NBC photo)

Michael Bublé returns to NBC for his second holiday special

Rod Stewart, Blake Shelton, Carly Rae Jepsen and Elmo will join Bublé as he sings classics from his holiday album "Christmas" in his hometown of Vancouver

Michael Bublé returns with another star-studded holiday Christmas special airing on Monday, Dec. 10, at 10 p.m. on NBC. The multi-Grammy Award winning singer is joined by guest stars Rod Stewart, Blake Shelton, and fellow Canadian Carly Rae Jepsen, as well as Elmo, on songs including "Jingle Bell Rock," "Let it Snow," "All I want for Christmas is You" and "Winter Wonderland." With a little magic, Bublé performs a special duet with Bing Crosby of the classic "White Christmas."

"I'm so excited to be back on NBC for another big Christmas special, which we got to tape in my hometown of Vancouver," Bublé said. "We had great fun with our guests and I think the show really captures the joyous spirit of the holidays."

Christmas has always been Bublé's favorite holiday and it's been a long-held dream of his to create the "ultimate" album that reflected the joy that the season brought to him and his family. But 2011 took the celebration to bigger heights than the Canadian superstar could have ever dreamt. His favorite classics, lovingly recorded, resulted in the multi-platinum "Michael Bublé Christmas," the second biggest selling album of 2011 with sales that exceeded 6.5 million copies worldwide. "Christmas" was produced by David Foster, Bob Rock and Humberto Gatica.

Bublé recently appeared on NBC's "The Voice" as a mentor on Shelton's team. He is also working in the recording studio with Bob Rock on a new studio album, which is scheduled to be released in 2013.

Prior to last year's release, Bublé completed his sold out "Crazy Love" Tour, which played in 80 North American cities and was seen by more than a million people. His "Crazy Love" CD won two Grammy Awards for Best Traditional Pop Vocal album and Best Male Pop Vocal Performance for his No. 1 single, "Haven't Met You Yet." Bublé is also the recipient of 10 Juno Awards including a Juno Album of the Year for his "It's Time" CD. His record sales internationally have exceeded 35 million copies.