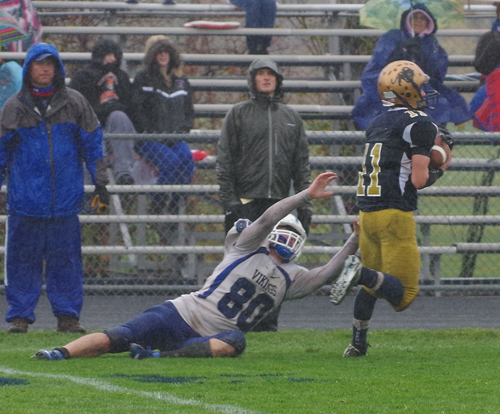 Grand Island shut down the usually high-powered Sweet Home offense Saturday, but it was the Panthers' defense that won them a trip to Ralph Wilson Stadium for the Section VI Football Federation Class A championship.

Sweet Home shut out Grand Island 13-0 at Robert P. Barczak Stadium. The loss ended the Vikings' season with a 7-2 record.

"They're a really good football team. They're physical on defense and they're fast to the ball, and we knew all that," said GI coach Dean Santorio. "With their guys playing press man coverage, we knew that would be a battle. We had a few chances to make few plays and we came up short."

GI turned the ball over on downs on its first series at midfield. On Sweet Home's first play from scrimmage in the game, Kahlil Humphrey gained 38 yards to GI's 22. Four plays later, Jordan Evert scored on a five-yard TD run with 5:52 left in the first quarter. Mike Torrillo's extra point wrapped up a five-play, 61-yard, drive that took just 1:57 off the clock.

Humphrey's big play to put the Panthers in scoring position was the type that eluded the Vikings the entire game, Santorio said.

A persistent rain made throwing the ball difficult. With the running game stalled, GI rarely came within sight of the red zone.

"We dropped two long balls that might get us down inside the 5," he said. "Those are big plays and against a good plays you've got to make it. If we make one of them, maybe we get in the end zone."

Santorio said, had his team scored, GI would have gone for a two-point conversion for the win rather than kick an extra point for a tie.

The Vikings defense shut out the Panthers the rest of the game.

"Going into the fourth quarter with 10 minutes left, with the ball down 7-0, you're in a position to win, and we can't ask for much more," Santorio said.

"We've always played tough games back and forth with Grand Island. It's been a tradition for years," Faller said. "Tough, hard-fought game. We made some plays, more plays than they did and we found a way to get it in the end zone."

The Vikings opened up the offense despite the rain and turned the ball over on three interceptions, one that Brandon Smiley returned to the end zone 55 yards with 8:27 left to put Sweet Home up 13-0.

"They were better on defense than we were. They were more physical and we couldn't consistently run the football, and obviously it's hard to throw it. We completed a couple early, but we didn't make enough big plays in this weather," Santorio said.

"We gave ourselves an opportunity, so I can't complain with our defense whatsoever. We kept them in check. We did what we had to do, we just didn't do a good enough job on the offensive side of the ball."

"Defensively, if you can shut a team like Grand Island out, you've done beyond your job," Faller said.

The loss closed out the GI careers of 21 seniors.

"Those seniors had a really nice senior year, and I don't think people expected them or our team to play as well as we did. And our guys played great, and it's with senior leadership," Santorio said.