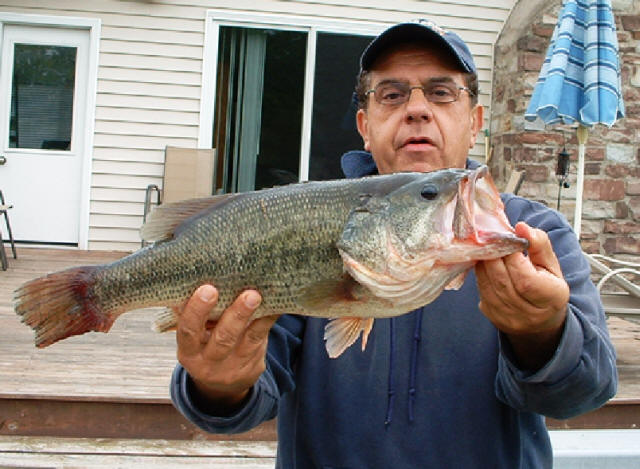 Fish report: Fall perch are in at Wilson Harbor, finally!

Richard Fortier and Tim Badeneyck, both of Niagara Falls, found the fall perch running in Wilson Harbor off the north dock at the Tuscarora State Park launch ramp. Fortier said the two cast out toward the No. 15 buoy and found them there, after catching nothing at the fishing area off the east pier at the harbor entrance.

That entrance area is always a good spot for perch, bass and anything else that swims around in the harbor. But on that morning the fish weren't in that spot. I asked what time they got out.

"After we stopped at Dunkin' Donuts in Ransomville, it was about 9:30 in the morning when we wet our lines, didn't find fish at the harbor pier, (so we then) moved to the park launch ramp and found them there," was their reply.

"We only fished 'til about noon," Fortier said, "Caught lots of perch in all sizes and ended up with 10 or 12 good-sized keepers."

There are a lot of largemouth bass roaming around now, but all little guys, according to Fortier. They are, without a doubt, the newly born from the 2012 spring spawning run, which is a good sign for future fishing. Largemouth bass are the bosses in the relatively small Wilson Harbor, but then the northern pike are nothing to be ashamed of either.

There are a lot of "shoestrings" (under 18 inches) in there, but when you latch on to a 32 to 34 inch pike you will have your hands full, especially in that shallow water. Some bass catches have been reported to be in the 6-plus pound range, which for northern climate waters is a good-sized catch, but not common. Common catches at Wilson will be in the 2 to 3 pound range, and they fit in the frying pan just right! In the south, because of the warmer waters and longer growing seasons, a 6-pounder would be a good-sized bass, but southern fishermen are always looking for the bigger lunkers.

The Weekend Bassers club, a small fishing club in Florida, for instance, holds tournaments all year, from January to December, and a 6-pound largemouth would be considered a good entry. Former Ransomville resident and good friend Jay Jastrzemski, a member of this club, won the June Tournament this year with five fish weighing a total of more than 24 pounds, fishing Lake Okeechobee, and of all places, out of a town named Clewiston, Fla., named the Gateway of Lake Okeechobee. In a contest just held in October, on Okeechobee, the winner entered a total 31 pounds for five fish, making it a 6-pound plus average for this fisherman. Jay is the son of Town of Wilson Supervisor Joe Jastrzemski. You can check the Bassers website here:www.weekendbassers.com. In Niagara, Lewiston is considered the "Gateway of the Niagara."

On Fortier and Badeneyck's outing, the weather wasn't favorable, with high west winds and a cool morning, with the temperature hanging around 50 degrees. They planned their day the night before, and Fortier had not renewed his fishing license yet. The day was saved when Badeneyck, being computer savvy, said "We can go to the DEC website and get one for you 24/7." He did and Fortier was saved. That day the two spotted some salmon jumping happily on their way up the narrow and now shallow end of the creek to do their fall ritual. I commented they could be rainbow trout moving around, and Fortier said he didn't think so because they were black, which is the tell-tale sign for fall run salmon.

The water in Wilson Harbor is at a record low. My fishing buddy, Don Supon from Niagara Falls, and I were in there with my boat two weeks ago, and normally we fish in 7 to 8 feet of water, but the deepest we could find was 4 feet. We found perch in 4 feet on the edges of weed beds. We could look down and see the edges, drop our lines in the clearing and the perch would sneak out and snatch our bait. Mostly small critters were competing for our red worms, but we did take home about 20 that were worthy of keeping.

It's nearing the end of October, and if you like shore fishing the creeks and ponds, now is a good time to go, and these fish will be active right through November. Bass season closes Nov. 30 and northern pike is open all winter until March 15, when it closes for their spawning season, and then reopens the third Saturday in May. Perch season lasts all year long, same as with trout and salmon.

King salmon spawning in the lower river is slowing down and they are starting to disappear. But as that happens, steelhead start showing up - very small numbers now, but as the water continues to cool those numbers will increase. The salmon are being caught by shore fishermen on spinners like No. 4 or No. 5 Super Vivrax, Little Cleo spoons, or egg skeins. Boaters like using egg skeins on their tried and true three-way swivel and pencil sinker. Another favorite is the Kwikfish banana bait drifted using the same three-way rig setup.

The fishermen I talk to like using the silver with blue scale color or the green/silver, but there are plenty of others to try if those colors don't attract. Run your bait behind the swivel not much longer than your fishing rod. By making it longer, the swivel will come right up to the tip of your rod, not allowing you to get your net under your catch. I have seen guys, in the excitement of landing their fish, snap the tip right off their rod because the leader was too long and the swivel wouldn't fit through that tiny hole. Nope, it wasn't me.

Remember, the best time to go fishing is when you have time. And don't forget the kids and the elderly, they like fishing too.

If you have questions or comments, contact me at [email protected] or the Sentinel. Up-to-date fishing reports can be found on the www.OutdoorsNiagara.com outdoors forum.