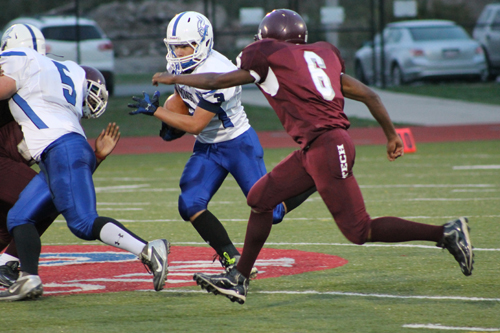 Grand Island passed its first road test of the football season last Friday with a 24-6 win over Huch Tech at All-High Stadium in Buffalo.

After opening the season with three straight wins at home, the Vikings played their first away game, first night game and first game on an artificial surface. They played a strong second half and erased an early 6-0 deficit with four unanswered scores.

Running back Danny Blocho led the Vikings ground attack with 108 yards on 19 carries with two touchdowns. Wide receiver Ben Goc had six receptions and a touchdown.

Hutch QB Lenny Dowell made GI defenders tackle air as he went 48 yards for a touchdown to put the Engineers up 6-0 barely two minutes into the game.

"I think we just weren't ready at that point to the game speed," Goc said. "We weren't focused enough right at the beginning of the game. We thought it was going to be ours."

Later in the quarter, GI's Cody Csendom recovered an errant punt snap at the Engineers' 37. Kurtis Johnson kicked a 22-yard field goal to put GI on the board 6-3, a score that would stand until halftime.

GI's running game that had carried them in its three previous wins was slow out of the gate. The Vikings had 53 yards rushing in the first half, but 126 in the second half.

"The first half obviously was a little choppy and shaky because they did drive the ball a few times, then we got some late stops," said GI coach Dean Santorio.

"But I'm very proud of what we did defensively. They didn't run many offensive plays in the second half and we were able to keep our offense on the field," he added. "In the second half, we had two long, long drives. So that was a big difference."

GI cashed in on its first touchdown drive by converting on third down four times in a row with passes from Quinn Corrao to Goc. The last reception converted third-and-goal into a 5-yard touchdown.

"I don't know, I guess coach had confidence in me and Quinn just got me the ball," Goc said of what would turn into the game-winning scoring drive. "I think I just really wanted to get past the sticks. One time I didn't even know I was getting the ball and it just came to me."

"We just felt as though at the time we were going to go to the guy that had maybe the most game and pass-catching experience. That was Goc," Santorio said. Though he threw two interceptions in the first half, Corrao came on strong in the second half, completing seven of 10 passes.

"Kurtis Johnson made a nice little catch on a third-and-5, Max Oursler on a second down, down there near the goal line, made a nice catch, so guys contributed," Santorio said.

Blocho had TD runs of 5 and 12 yards in the fourth quarter to extend the lead as the Vikings D put a stranglehold on the Engineers offense.

The first road win showed the Vikings can win anywhere, Goc said. GI will have to win at Williamsville North Saturday to remain undefeated. On the same field a year ago, the Spartans handed the Vikings a tough loss.

"They're a good football team," Santorio said. "Their quarterback's a good athlete, they've got a real good back and receiver, and they played us real tough and beat us 6-0 last year. It'll be a good ballgame."