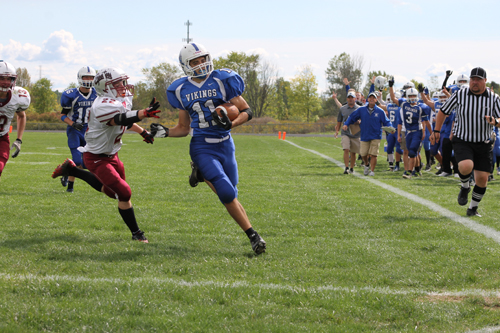 Grand Island running back Mitch Fachko turns the corner on his way to the end zone on an 18-yard touchdown run during a 31-14 win against Starpoint on Saturday. (photo by Larry Austin)

The student section stormed the football field after Grand Island's 31-14 victory over Starpoint on Homecoming.

And why not? For the third game in a row, the Vikings dominated its opponent, rolling up 31 unanswered points Saturday after spotting the Spartans a 7-0 lead.

"You know what, that's great," That's the first time I've seen that here in a long, long time," said GI coach Dean Santorio of the fan reaction. "And it's nice to see students, not just on Homecoming but the other couple games, have a little student section to get people going."

"Now I can't wait 'til the turf goes in and they do it every weekend Friday night game."

"It means so much," senior wideout Ben Goc said of Homecoming fan support. "All our fans over there, they're just pumping me up so much, it's awesome."

Homecoming "just wouldn't be the same if we lost," receiver Cyle Alcorn added.

Starpoint's Evan Majewski scored a touchdown on the Spartans' second play from scrimmage on a 50-yard sweep around right end. GI responded with touchdowns by Anthony Zogaria, Cyle Alcorn, Mitch Fachko and Goc, along with a 25-yard field goal by Kurtis Johnson.

The Viking took the momentum away from Starpoint beginning with a punt block by Dominic Trip, which gave GI the ball at the Starpoint 1. Zogaria plowed into the end zone on the next play to tie the game at 7-7 with just under three minutes left in the first quarter.

"Tripi's play on the punt block was huge because we were down 7-0," Santorio said. "It got us down in there for an easy score and then pretty much from there I'm really happy with the way our offensive line did their job up front on our run game. And, again, our run game opened up our pass game and Quinn did a nice job throwing the football when we needed to. We want to stay as balanced as possible."

"I can't say enough again about our defense. After we give up the score on the second play of the game pretty much from there till late in the fourth they did a great job there, too," Santorio said.

Alcorn had a great weekend: he was named Homecoming king on Friday and caught a touchdown pass on Saturday. Alcorn's TD pass from Quinn Corrao came on fourth-and-19 at the Starpoint 22.

"The safety got drawn over to the outside, and our slot receiver just made a nice catch," Corrao said. "It all started with great blocking by the line though. They created a nice pocket for me, and I was able to throw it in there."

"And I think actually it was his first catch of the year," Santorio said of Alcorn's TD. "And Ben Goc made a great catch on a great throw from Quinn Corrao down our sideline. We've had a lot of guys contribute. I said this is the most kids we've every played in the last 21 years I've been coaching, the most kids we've every played through three weeks. I think 22 or 23 guys have gotten regular time. Which for us being an A school and not having huge numbers, we're lucky if 15 guys get a lot of action early."

Zogaria recovered a fumble in the Spartans' backfield with a minute left in the first half, and Johnson and the field goal unit ran onto the field before the stroke of halftime and tacked on a 25-yard field goal to give GI a 24-7 lead.

Ben Goc closed GI's scoring in the quarter, catching a 21-yard toss from Corrao on an out and up pattern. "Once I heard that call from the huddle I knew I was going to catch the ball in the end zone," Goc said, praising Corrao for his poise in converting plays on third down and keeping drives going.

After winning three straight home games, the Vikings finish the schedule with four games on the road, beginning with Hutch Tech on Friday night at All-High Stadium in Buffalo.

"I think we can win anywhere, no matter where it is," Goc added. "We're a good team, we're a tough team. We can win in any stadium."