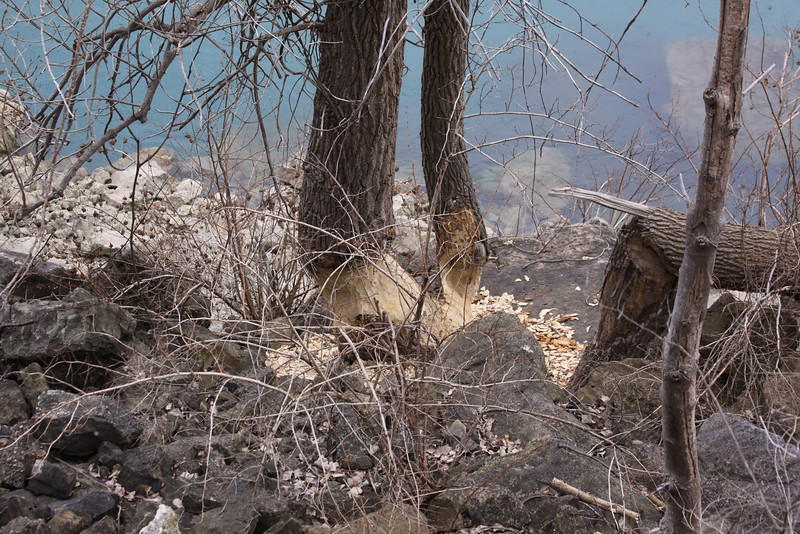 Beaver evidence in the gorge area.

Does Niagara have beavers? Yes, it does!

Although mainly a nocturnal animal, beavers can be spotted occasionally during the day, and their homes or "lodges" can be seen around the county along different streams and creeks. There is a "lodge" along the park trail at Four Mile Creek in the state park; along your walk on the path, you can see trees that are chomped upon by these little lumberjacks. I must admit, this summer I haven't taken my walks along Four Mile Creek, but in prior years I have seen many beaver signs and the gnawing of trees.

I live about 1,500 feet west from the mouth of Four Mile Creek. On calm evenings, when the sun is about ready to drop down into the lake occasionally we can watch one or two beavers taking a cruise along the lake shoreline, probably exploring their surroundings. You don't hear them coming, you'll just see a big "V" in the water as they are swimming by. If you startle them they will raise that big paddle-shaped tail of theirs and slap it on the water and take a dive, then you won't see them anymore that evening. The slap is loud, and it is used to warn others to beware of danger. The extreme low water levels in the creek this year may have affected their habitat, as we haven't seen any since early spring. The water is so low you can walk across the mouth of the creek where it enters the lake.

One time this area was great beaver country, and a great asset to Native Americans. They used beaver pelts for bartering in the 17th century, trading to Europeans for metal tools and implements. The Europeans used the pelts for clothing and hats. It is said back in those days upper class Europeans separated the fur from the skin to be used in the production of felt to be made into hats by using poisonous mercury. Hat makers were called "hatters" and after time they would become sick and disorientated from absorbing the mercury, thus the expression "mad hatters" or "mad as a hatter."

In New York state beaver populations dropped in the 1800s to where they were nearly extinct, but they made remarkable recoveries in the 1900s through proper management by the state Department of Environmental Conservation. Trapping and transferring them to better habitat, and management of hunting and trapping seasons has kept them at desirable levels.

Recently, Ed Rogers of Youngstown told me he had seen beavers cruising down the river some mornings around 6 a.m. while walking his dog on Water Street near the Youngstown Yacht Club. He recalled that Villa Apartments on the river in Youngstown used to have a problem with them chewing on young trees about seven to eight years ago, and to prevent additional damage the owners put screening around the base of the trees. Rogers said he would walk down by the river to see where they were going or where they came from, and as he tried to follow them, they just disappeared.

Last fall, a hiker down in the gorge trail sent me the photo seen here of a large felled tree and two more large ones that were gnawed through, proving that beavers are occupying that section of the river. These trees are right on the edge of the water.

If you are adventurous, a day spent hiking the gorge trails can be very rewarding. Forgetting a camera for the hike would be a sin. Look at what this hiker saw. Carry a fishing rod too; there are lots of places to fish.

In February of this year, Ray Dietz, husband of Town of Porter Historian Sue Dietz, was hiking in the Niagara Gorge on the Canadian side and came across some maple trees that were being dined on by these semi-aquatic rodents. I don't know if they swim from the U.S. to Canada but they better have papers, or at least a phone CANPASS

The industrious beaver is considered good for the environment, but at times also can be a nuisance. Beavers will burrow into the banks of rivers and lakes, building their lodges that sometimes turn into dams along streams. They can transform landscapes with their dams; building beaver ponds and marshlands and turn them into habitat for fish, birds and other four- legged critters. However, they can also do damage to man-made structures, contaminate water supplies, and cause crop damage to farmers with their dams.

In New York state, beaver control is managed by the DEC. The law says you may not remove or interfere with a beaver dam unless you have a permit from the DEC. Hunting and trapping season for beavers in our part of the state is from Nov. 1, 2012, to April 7, 2013, and there is no bag limit. You can check all the details at www.nysdec.ny.gov, and while you are there, check the information they have on beavers.

Big news: the King Salmon are in the river and all tributaries. Olcott has fishermen catching them from the piers, but as of this writing it's still slim pickins'. Late evening and into the night works best using glow-in-the-dark spoons like Little Cleos in 2/5 and 3/4 ounce sizes. Good-sized fish are being recorded.

The lower Niagara is filling up with these kings of the waterways; shore fishermen are enjoying most of the early action right now and boaters will soon be filling the river too. According to Gerry at A-1 Bait Supply, the Power Authority fishing platform is the hot spot right now, but shortly, the Whirlpool and Devil's Hole areas will be booming. Gerry says to go with No. 5 Super Vibrax spinners in the fluorescent red or chartreuse colors and attach a large split shot up the line at about two feet to help the spinner get down to a lower water level. Cast into the current and let your lure drift back to you, all the while reeling in so you don't touch bottom; those lures don't come cheap. Another report from the platform is to use green/chartreuse plastic twister tails on a large jig head. Bass are still turned on, just trying to get fattened up for the winter trek, and big walleye in the river is still the big story going around. Use large spinners on your worm harness or on your yellow sally three-way setup.

And don't forget to get those kids out fishing. You will be surprised at the excitement you'll have watching them land a fish or two. Teach them well.

Regular, up-to-date fishing reports can be seen on www.OutdoorsNiagara.com on the Outdoors Forum where fishermen post the latest. Contact:[email protected].