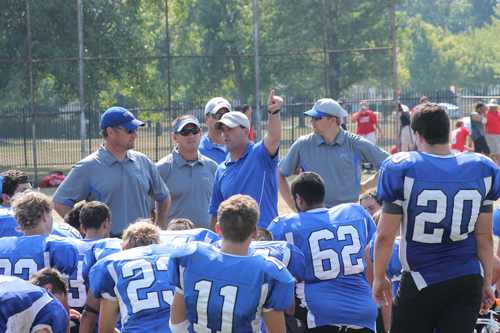 GI productive in scrimmage at Lockport

Grand Island football coach Dean Santorio was "pretty happy overall" with his team after the Vikings' first live action of the season Saturday.

"I think you always try to come out hopefully injury free and not banged up, which we think we did. And you hope to walk out of here with some positives. You know you're going to make mistakes and you know there's going to be plays that you give up defensively and breakdowns offensively, but you want to come out seeing some good things, and I think overall we're pretty happy with some of the things we did," Santorio said. "That doesn't mean we don't have a lot of work ahead of us, but we're happy with some of the things we saw."

"I think up front early on the run game was pretty good," he said, though he noted the team had two fumbles.

The quarterback position is held by junior Quinn Corrao, who spent last year on the Vikings junior varsity. Corrao "did a really nice job delivering the ball and going through his reads and progressions," Santorio said. Notably, Corrao connected with tight end Chris Connors for a touchdown pass in the scrimmage against St. Francis.

"And it was good to see our pass protection offensively was really good at times. Teams blitzed us here and there and we seemed to pick it up okay," Santorio said.

On the defensive side of the ball in the scrimmage, Santorio noted that the coaching staff saw "some of the best open-field tackling we've had in a few years at this scrimmage, where guys were willing to make sure they were low and wrapping up knees and ankles and pulling guys' legs into them, rather than reaching and grabbing up top."

Linebacker T.J. Acker also had two interceptions in scrimmages one that would have gone back for a touchdown in a real game. Max Oursler had a interception for a big return as well.

"We think we were fairly aggressive defensively, which is probably most important," Santorio said.

GI opens the season for real on Saturday at 2 p.m. at Masters Field against Kenmore East.

"I think everyone's got work to do," Santorio said of high school football teams in general at this stage of the season. "It's just a matter of how quick you can get ready for your first real game."