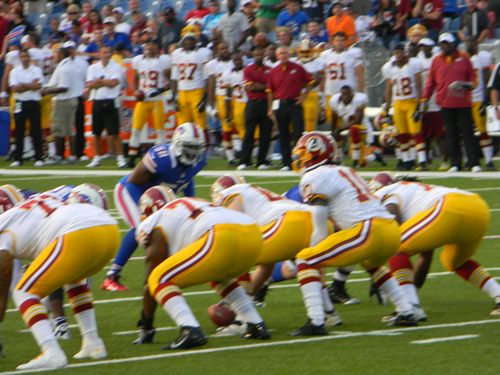 Thursday night's Bills-Redskins preseason opener was one marked by a largely lackadaisical offense for the Bills first string, but also impressive showings by two new QBs in their first games on both squads.

In picture No. 1, rookie Washington quarterback Robert Griffin III had a good first game as he led the Skins on a touchdown drive in the first quarter. RG III finished the game completing four of six passes for 70 yards and a 145.8 rating.

In photo No. 2, Buffalo's newly signed veteran quarterback, Vince Young, played his first game in a Bills uniform, completing five of 12 passes for 50 yards in the second half. Young effectively moved the Bills downfield on a fourth quarter drive, including two key third down conversions, to reach the Skins' 22-yard line. However, penalties and generally sloppy play forced the Bills to settle for a field goal on that drive, a 45-yarder from kicker Rian Lindell.

Buffalo went on to lose the game by a 7-6 score. (photos by Terry Duffy)