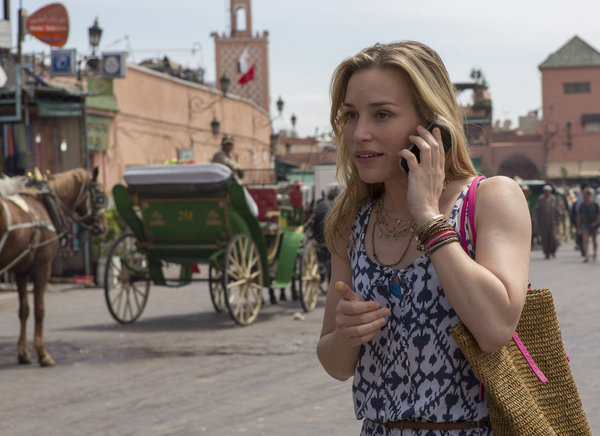 From the "Covert Affairs" episode: "Hang on to Yourself": Piper Perabo as Annie Walker. (photo by Didier Baverel/USA Network)

It's no secret why fans of the USA Network's hit spy series "Covert Affairs" tune in week after week: charismatic star Piper Perabo.

The Dallas-born actress is smart, flirty, adventurous and charming as CIA agent Annie Walker. "Covert Affairs" is the perfect fit for the actress who danced atop a bar in "Coyote Ugly," scaled walls in "The Cave," and worked magic in "The Prestige."

"I wasn't looking for a television show. But I'm always sort of looking for a strong female lead," Perabo said. "And so when the show came up, what I really liked about Annie is her - she's true to her moral code even if it's not the sort of the rules of the game.

On the eve of the season three premiere of "Covert Affairs" (Tuesday, 10 p.m., USA), Perabo described the things she tunes in for each week - namely its excitement, the stunts, a bevy of languages, costar Christopher Gorham (Auggie) and, of course, those shoes.

As season three begins, Annie finds herself thrust into a new world of spy games - and working for a new boss: the hard-charging Lena ("24's" Sarah Clarke).

"Well, I mean this season, she kind of - this season is so explosive and so fast," Perabo said. "I mean, if Annie would just slow down a little bit, she might see things more clearly. But she just doesn't want to slow down. She's so - she gets a little excited and drunk on the power that she's given under Lena's division.

"So if I was her friend, I would tell her to slow down. But since I get to play her, I don't want to tell her that, because it's really fun to just go, you know, running towards a burning building."

"I like how we do action on this show," Perabo said. "It's a real Doug Liman style where we're real run-and-gun with handheld 5D Canon cameras. And when we shoot internationally, most of the time we don't block off a street. You know, we don't have cops to shut it down. We just go. So the whole world starts invading our set. And then we're on foot. And the camera boys are used to it. So, it gets - the action has a great acting component in the show because of the way we shoot it."

"We always talk about Bourne and how the Jason Bourne fights are sold by Doug Liman and how it's messy and handheld," Perabo said. "And we're always sort of aiming for that kind of visceral feeling of a fight as opposed to a cleaner, choreograph style. ... When you start moving fast, it is more dangerous and you have to be really alert and really rehearsed in a way to make it get it messy."

On "Covert Affairs," one of Annie's biggest strengths in the field is her ability to communicate.

"The languages were not (easy to pick up)," Perabo said. "We're up to 18 languages that Annie speaks. And I told the writers they have to sort of put a lid on it, because it started to get a little ridiculous. Although, you know some languages have gotten easier. At the beginning, Annie didn't speak any tonal languages. And now she speaks Mandarin. And so, the tonal languages are still really difficult for me.

"But the European languages and Russian I sort of have a handle on. So at one point, the boys were saying if we - if we could find a way to justify it, we could do a whole act in a foreign language. And so, I think that's such an exciting idea. And I don't know what language we'd do it in. But, I just hope it's not Mandarin!"

As the end of season two, Annie realized she had feelings for Auggie (who, while blind, always keeps watch over his coworker and friend). Auggie, meanwhile, was off to find an ex-girlfriend in Africa.

"It definitely puts a strain on the friendship when one person feels more strongly than the other person. At least, that's my personal experience," she said. "So the problem is I mean you know it's sort of - it's Auggie - the fact that Auggie's blind in some ways mirrors his relationship with Annie. And it's fun to play the scenes with Chris Gorham, because you can sort of be in love with him.

"And as long as you're not saying anything, Auggie doesn't know. So there's a lot of moments in the opening - especially where Annie's trying to sort of keep her feelings under wraps. But it's, you know, it's plain as (the) expression on her face. Just that Auggie doesn't know. It's really fun to act it, actually. And Chris Gorham's constantly laughing because he could see me sort of peripherally while he's acting Auggie. And then he's like, 'Come on, gosh. Everybody would feel that smile coming at them.' You know he'll tease me a lot about how I look at Auggie."

"I mean it sounds so girlie, but I also really like how Annie dresses," Perabo said. "I love that they let her - that's where the kind of James Bond comes out in Annie is her shoes and her dresses and her jackets. And there's no way - I mean, a character makes a joke about it in this season. ... He says, 'You know, how can you could you afford this many shoes on a government salary?' And it's so true. It's so beyond fantasy, her shoe collection. Oh god, it's ... as a girl, it's so fun to walk into the wardrobe trucks in the morning."

For those considering "Covert Affairs" for the first time, Perabo said it makes a great warm-weather treat.

"And I feel like' Covert Affairs' really takes advantage of that sort of tone of the summer."

"Covert Affairs" airs Tuesdays at 10 p.m. on the USA Network. Find the show online at http://www.usanetwork.com/series/covertaffairs/index.html.