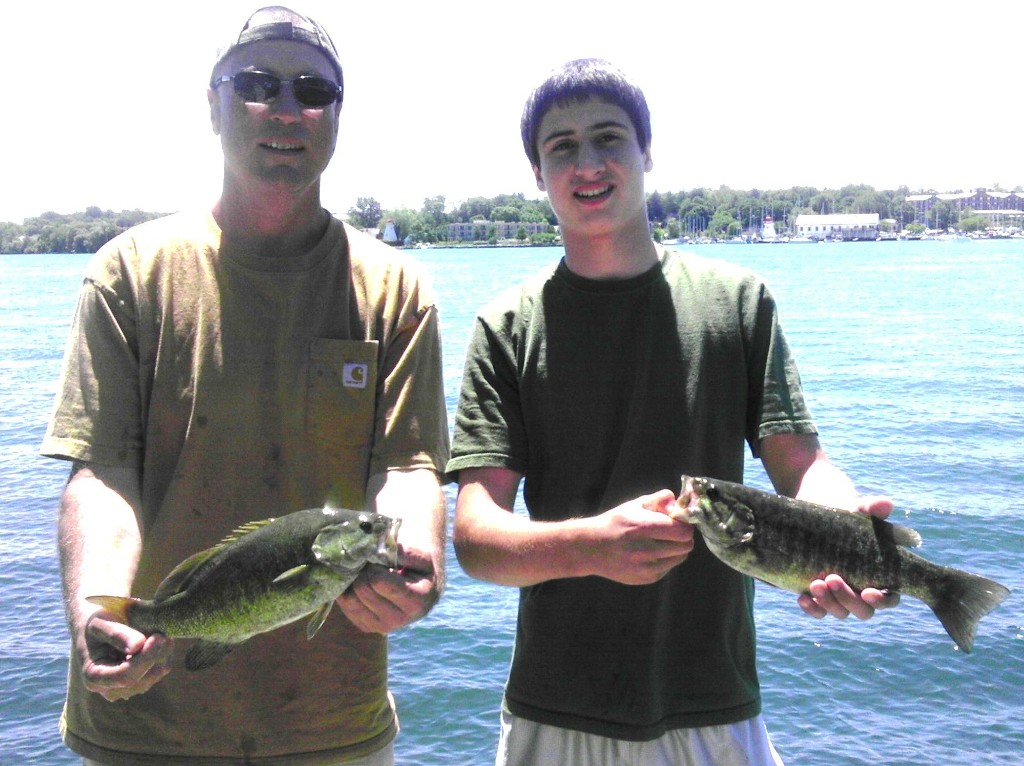 Remember to take a kid fishing. Jesse, pictured at right sure enjoyed his day.

Last Saturday my grandson Jesse, son Danny, and I went on a little fishing excursion for bass on the lower Niagara. It was a bright, windless, and event-filled day as it seemed the fish wanted to show off.

Danny latched onto the first fish, and it was a monster. Apparently he was fishing with a dull hook because he got it to the edge of the boat and the fish winked at him, jiggled his head, spit the hook out and swam away. He must have told the others to watch out for the plastic motor oil-colored tube jigs and don't be fooled, stay away from those things. After that, the little ones that didn't listen would come around once in a while and bite one. They were put back in the water while we waited, for the big boys. Forty minutes later the bigger guys moved in and we invited some for dinner. Six of them came.

While we were fishing, we saw the U.S. Coast Guard checking boats, and eventually they came around to us, pulling up alongside of our "vessel." We were greeted with, "how's the fishing?" After that introduction, they asked, "When was the last time your boat was boarded?" (for inspection). Captain Danny of our vessel, told him "about two weeks ago." They wanted to know if we had the paper showing it was boarded. Our captain showed it, the young Guardsman passed it to his commanding officer, or coxswain, who inspected it with a magnifying glass, handed it back and thanked us. Then all they wanted to see was three life preservers. After that we chatted.

Part of that conversation was about why the Canadian law enforcement officials are pulling American boats over that wander into their waters. They said our U.S. State Department has been working on it, trying to resolve this issue in some way, but the Canadian officials have not responded. We questioned about not landing, and just passing through. They told us if you wander over there, don't shut off your engine to drift or anything like that, just to keep your motor running. I never thought to ask about sailboats moving with their sails only. When the Coast Guard crew was getting ready to part, they said, "Please start your engine so we can hear it." By that gesture they wanted to make sure they weren't driving away leaving us stranded, I suppose.

We continued to fish along the shore just north of Joseph Davis Park near the pipeline that comes from CWM, which is a good hot spot, and is frequented by smallmouth bass. For naysayers, the pipeline has no water flow now and when it does, it's like one day, once a year. I remember when that pipeline was going in, a CWM official saying that the water coming out of there was so pure that he offered to drink a glass of it for his audience. He's not with us anymore, and I often wondered if he ever did take a sip.

After we caught all the fish in that location we decided to take a trip to the Coast Guard drift and try our hand there. As we traveled north, we spotted two boats together near the middle of the river and we thought they were partying. As we got closer, we saw a large black pontoon boat with small blue lights flashing and a tiny, what looked like, a 4x6-foot maple leaf flag on a stick, waving off the stern. Yup, some American citizen, a dad, with his wife and young son about 8 years old were pulled over, and being questioned/harassed by the Canadian authorities. Maybe dad took them out and they were fishing on New York's Free Fishing Days weekend (June 23-24). We were wondering how many others had been pulled over today and ticketed or fined. Sometimes I wonder if all this continued enforcement is in the name of Canadian Homeland Security or if it's just another money grab, trying to balance the budget. I'll bet it's the latter. For you that don't have a clue where the international borderline is, get a map or Google it. One example: where the Youngstown sailboats are moored, there is a thin strip of water between them and the border. Look it up.

Anyway, as we approached Youngstown, the water had whitecaps on it and it was too rough for our boat with the wind blowing from the west, so we headed into the ramp. We only kept one limit and took it home, cleaned them, and had a fresh smallmouth bass dinner with some leftover macaroni salad my wife made the day before. Well, she called it macaroni salad, but it had everything in it but the kitchen sink, and that included tuna fish, and Green Giant peas. Umm, no more leftovers.

One last thing, Our U.S. Guard doesn't hassle Canadians or others, only if landing on U.S. soil. Then it is handled by the U.S. Border Patrol.

I would really like to compliment our Niagara Station U.S. Coast Guard for being so courteous and efficient, in doing the job they were sent out to do. When they come up to you, greet them as they will surely greet you, but have all your safety things ready and up to date and you'll be on your way in a flash. Also, I live by the lake and I frequently see those young men out there in any weather, any time, searching for the missing, or saving lives, and risking their own.

Good to have you around! Thank you.

Comments or suggestions? Email me at [email protected].