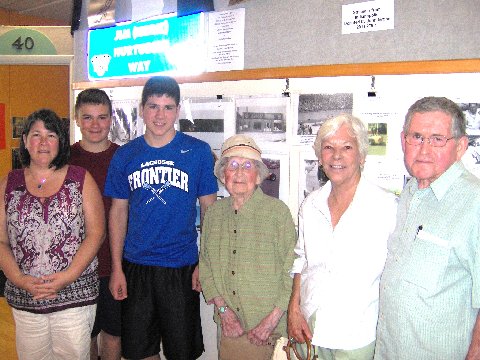 The North Tonawanda History Museum's participation in New York Heritage Weekend, May 19-20, included the Jim (Herk) Hurtubise Memorial Car Show on May 19. Hurtubise was a North Tonawanda racing legend and the museum has a permanent exhibit in his honor.

On display during the car show and to remain on display at the North Tonawanda History Museum until July is the FOAR SCORE Hall of Fame trophy. FOAR SCORE stands for Friends of Auto Racing Seeking Co-operation of Racing Enthusiasts. FOAR SCORE was formed in Wheatfield in 1946 and is the oldest race fan club in America. Jim Hurtubise was inducted posthumously into its hall of fame in 1986.

With the trophy in the History Museum (photo No. 2) are FOAR members Roger McCabe, past president, left, and Paul Faleski, current president. Robert Deull, a member of FOAR SCORE and of the Rotary Club of Niagara County Central, helped make possible the loan of this trophy to the museum.