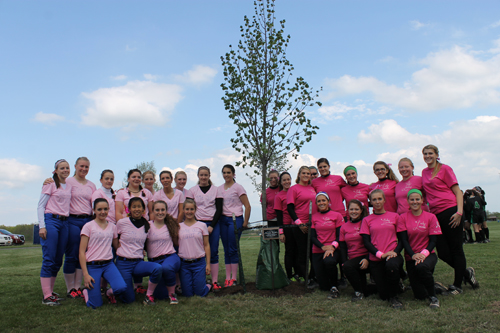 Varsity softball teams from Grand Island, left, and Lewiston-Porter meet at a tree dedicated in memory of Rosanna Russell prior to Wednesday's Strike Out Cancer game in Veterans Park. The tree honors Russell, who lost her battle with cancer three years ago. (photo by Larry Austin)

Before doing battle on the ball diamond, two opposing softball teams joined in a shared effort to honor the memory of one who lost her battle with cancer.

Grand Island hosted Lewiston-Porter Wednesday at Veterans Park in the second annual Strike Out Cancer game. Teams dressed in pink, symbolic of breast cancer awareness, and held a pregame ceremony to dedicate a memorial tree in honor of Islander Rosanna Russell, who died of cancer three years ago.

Jacqueline Morris, a special education teacher and varsity softball coach, said cancer "really hits home with Grand Island." Russell's daughter, Rosalie, is a junior on the Vikings softball team. The tree-planting is "in honor of her mother for what she's done for the sport and for the community and with Relay For Life."

"We love Rosalie very much, and we wanted to do something for her and her family that would help the community in the future. We would love to continue this tradition with Lew-Port as well," Morris said.

"One of the girls on the team last year thought it would be a good idea to play a game kind of in her honor. It just so happened to be against Grand Island," Calarco said. "When I approached Jackie, she was all about it, and her girls really came through."

"Maureen was really touched that they took a personal interest in extending themselves to her, and throughout her battle they sent get-well cards," Calarco said. "And she said that she had many occasions that when she had a rough day she thought of that game, when she had 30 girls, 15 of whom she didn't even know, who came up to her and hugged her after the game."

Calarco reports that today Castiglione is doing very well and is in remission.

Lew-Port will host the third annual Strike Out Cancer game next year when the Vikings visit the Creek Road campus diamond.