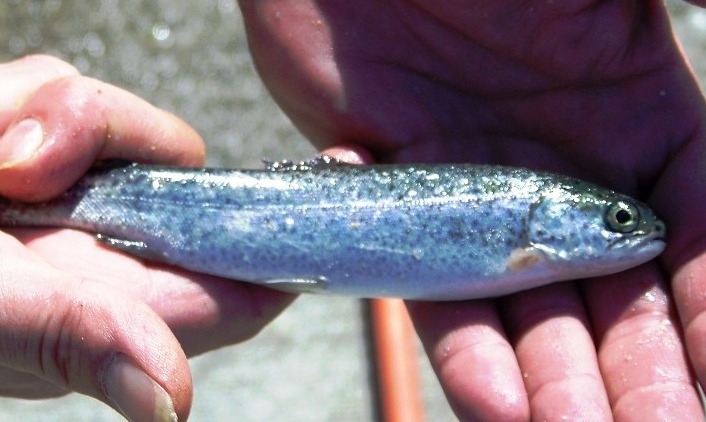 Is it a steelhead or a rainbow trout?

OK, you heard it here.

What is the difference between a steelhead trout and a rainbow trout? Around here in our watershed you could say they are the same, and people like to call them all "steelhead." Maybe it just sounds better. Genetically, they are both the same.

A rainbow trout is a trout that spent its entire lifetime in freshwater, and a steelhead is a fish that grew up in saltwater such as the Pacific Ocean, and then come back to streams to spawn.

Now I'm going to confuse you. All steelhead are rainbow trout, but not all rainbow trout are steelhead. Steelhead is the name given to rainbows that migrate to the ocean (Pacific, in particular) grow, and come back to the streams to spawn. Got that? Confused?

Really, who cares at this point. But to simplify, if the fish did not have access to the Pacific it would be called a rainbow trout. And who cares anyway? Ask 10 different fishermen and you will get 10 different answers. They look the same, catch the same, cook the same, and are fantastic on the palette, whether baked, smoked, fried, on the grill or even canned. Fresh run trout is a gorgeous looking fish, and I feel only a brook trout could surpass it for being the best looking freshwater fish in the universe.

On Thursday, April 12, the Niagara River Anglers Association in cooperation with the New York state Department of Environmental Conservation stocked 10,000 fingerling (baby) steelhead in their rearing pen that is located in Youngstown at the Youngstown visitor's overnight boat slip. A fingerling is about as long as your finger. A man's finger that is, and ladies you won't qualify. If you want to see this operation, take a ride down Water Street in Youngstown and just before you get to the bottom of the hill, make a sharp right. Go down that short road to the end and the project is right there. Drive very slowly down that road, as workers are putting boats in their moorings for the season. Don't go in the fenced area to the pens.

I visited the NRAA pen project this week with the project volunteer chairman, captain Steve Drabczyk from Lewiston, and his right hand man, Ed Garcia. Drabczyk told me it will be approximately two more weeks before these fish will be released. They have already grown about two inches since being put in the pen, Drabczyk added.

These pen projects are a very intensive undertaking that require planning, preparation of pens before the baby fish arrive, and feeding. After they arrive, the baby fish need to be fed five times a day, every day, starting at 7 a.m., and every three hours by an army of feeding volunteers. The feeding schedule needs to be strictly followed. They are fed prepared fish pellets like they get in the hatchery. Doing so trains the fish to feed on their own so when they reach the wide open waters instinct takes over and off they go fending for themselves. Feed is measured out ahead of time so as the fish grow, and require more feed they get the proper amounts that are pre-planned by DEC biologists. If you would like to help in any of these projects, these volunteers would love it.

The primary reason for volunteers to work so hard and give of their time in rearing projects is to maintain a fishery for their sport. Hopefully, many of these fish will spawn naturally, creating an even better fishery for future generations.

The NRAA pens in a couple of weeks or days will see an additional inoculation of chinook (commonly known as a king) salmon in their other side-by-side pen. These babies will be fed, imprinted, and released in the same way as the steelhead are, and then released in about three weeks to go on their merry journey, all in tip-top shape and all imprinted. The average, freshwater-raised, lifespan of a chinook salmon is 3 to 4 years, and the most common size caught in New York state is between 15 and 35 pounds; however, the New York state record King was weighed in at an astounding 47 pounds, 13 ounces, in the fall of 1991.

The reason for pen rearing is that these fish, (salmon too) get imprinted to the waters where they were raised as babies other than the fish hatchery. They grow into what is called "smolts" (a little more grown up), then they move out to the big waters of the lake, grow, and return to the waters they came from to reproduce and complete their life cycle. Scientists call that "homing." Each stream has a unique chemical composition, a distinctive odor, and somehow they return home with the help of their maker in the sky. Anyway, that's all you need to know for now about imprinting and smolts.

The NRAA is one of the pioneers in pen-rearing trout and salmon in New York state. There are a total of seven projects dotted all across Lake Ontario from Rochester to the Niagara River and all managed by volunteers from fishing clubs. Plus, there is a group of guys in Wilson, headed up by captain Mike Lis, Wilson Councilmember Brad Clark, and a handful of dedicated volunteers. They manage a highly successful project, as do the dedicated members of the Lake Ontario Trout and Salmon Association who have been doing this for several years also.

Fish Report: My sources tell me lake trout, steelhead, coho salmon and brown trout are still being caught by the numbers at the Niagara bar and east. No significant local perch movements yet, but that will follow as soon as water temperatures improve by a few more degrees. The Buffalo Small Boat Harbor has seen great catches of them as well as Riverside Park in Buffalo, opposite Strawberry Island. Remember Lake Erie is always warmer than Ontario. On Friday April 13, the DEC stocked 20,000 6-7 inch steelhead at Lewiston Landing. These fish were surplus fish from the Altmar Hatchery in the Salmon River. Smelt dippers are reporting the run has slowed dramatically.

In the pictures you see is how large these steelies can get. Drabczyk is seen holding a Niagara River stocked steelie.