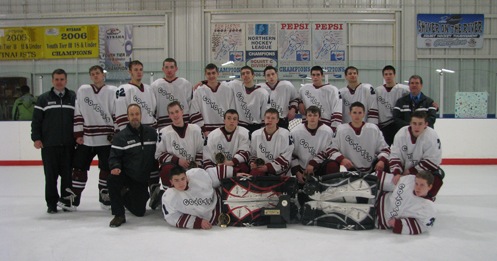 The NC Coyotes Midget 16U team followed a victory in the Gene Harrington Spring Classic Tournament at Hyde Park Arena with an incredible ride to the finals of the New York state championships. The team was 4-0 in the Gene Harrington Classic and defeated teams from Canada and Long Island to complete their sweep and capture the tournament title. Following the Harrington Classic, the team swept Wheatfield AA in a two-game set that proved to be a tune up for the state championship.

The Coyotes were considered an underdog going in to the tournament, but finished the round-robin round 2-0-1, placing them first their division.

In the semifinals, the job did not get any easier playing one of the hottest teams in the tournament, Bear Mountain. The Coyotes played one of their strongest games yet defeating Bear Mountain, a pre tournament favorite 4-2, setting up a trip to the finals late that afternoon against Valley. The Coyotes jumped out to a 2-0 lead in the first but Valley fought back hard in the second and tied the game at 2. Valley got a goal with 12 minutes left in the third but the Coyotes came storming back to tie it at 3 with just 3:16 to go. Unfortunately with just 50 seconds left Valley tallied and went up 4-3. That's how the contest ended.

The Coyotes finished their spring season 9-1-1. The team is made of players from Niagara Falls, Niagara-Wheatfield, Lewiston, Amherst and Grand Island.