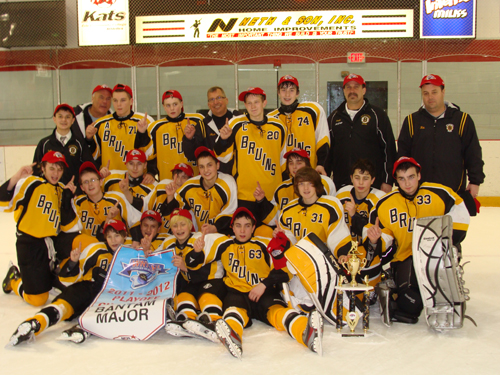 On Feb. 25, the Bruins defeated the Monroe County Eagles, 3-2, in overtime. Pavel Kovtunov started the scoring with an assist from Michal Swacha. Swacha scored the second goal for the Bruins with an assist from Thomas Major. Monroe tied the game with 44 seconds left in regulation to send the game to overtime. The game ended with 49 seconds left in the overtime period when Brad Hejmanowski scored on a pass from Stephen Wisniewski to advance the Bruins to the semifinals.

The semifinal game saw the Bruins defeat the Rochester Red Wings, 2-1, again in overtime. Swacha tied the game at one, with assists from Hejmanowski and Jeff Wawrzynek. The game ended 58 seconds in OT on a goal from Robbie Nappo, assisted by Matt Metz and Thomas Major.

The championship game was held at Cheektowaga, where the Bruins faced the Hamburg Hawks. The Bruins won the game 4-3 with goals from Ryan Coppins, Swacha, Kovtunov and Nappo. The goals were assisted by Swach (two), Kovtunov, Hejmanowski, Metz and goaltender Garrett Varisco. Varisco was strong in net, registering the win in all three games.