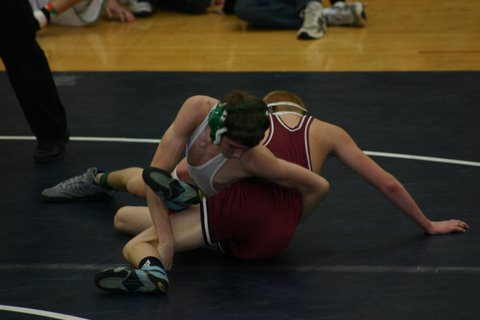 The Lewiston-Porter varsity wrestling team successfully defended its 2011 Section VI and Class B tournament championships. The Lancers have two wrestlers traveling to Albany for the New York State Wrestling Championships.

The championship run started on Feb. 3 and 4. The Lancers hosted the Section VI Class B Tournament, which consisted of 12 teams, including the storied powerhouse teams of Pioneer and Olean. The Lancers wrestled with heart and determination at the Class B to win the tournament by 70 points over Pioneer.

The Section VI Division II championships were held at East Aurora on Feb. 11. There are 12 wrestlers in each weight class that qualified from the Class B, C and D tournaments. Seven of the 11 L-P wrestlers became section place-winners, including Section VI 113 pounds champion Ryan Kromer. He made an epic run to become the lowest seeded wrestler in the tournament to become a champion. All three matches Ryan Kromer wrestled were very close, including an overtime and triple overtime match. He had to beat three very tough opponents - including avenging earlier season loses to McGreggor and Pat McCarthy from Fredonia.

L-P wrestler Reagan took second to Fredonia's Jude Gardiner. Both Ryan Kromer and Reagan will wrestle in the New York State Championships in Albany on Feb. 24-25.

Dallavia and McMurray were selected as alternates for the state championships and will attend if two wrestlers in their weight are not able to wrestle in the tournament. The Lancers won the tournament over state-ranked No. 16 Fredonia (by two points) as well as Section VI No. 1-ranked Falconer.

Next up for the Lancers is spring lifting and wrestling. The Lancer wrestling team philosophy is to train year-round in order to give wrestlers the best opportunity to win. The students will lift five days a week in the high school weight room and wrestle at Cobra North wrestling club at NCCC and New York Super Six wrestling club at UB.