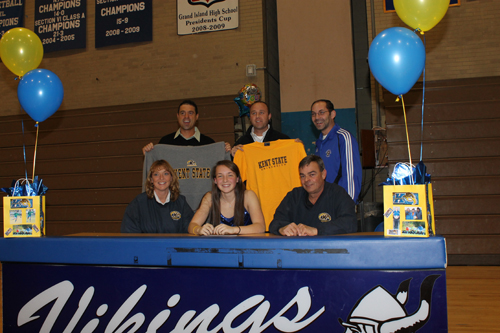 Stephanie Senn signed on to play goalkeeper for the Kent State University women's soccer team next year, but if the Golden Flash need someone to play one of the other 10 positions, the Grand Island High School senior is ready.

During a ceremony last Thursday attended by dozens of friends and family in the Vikings gymnasium, Senn signed a national letter of intent to attend Kent. She is the latest girls soccer player at Grand Island High School to receive a Division I scholarship.

"We've been blessed with soccer goalies for a long time, for the last 10, 15 years," Grand Island Athletic Director Jon Roth said at the ceremony. Senn's attitude of doing whatever it takes for the team's success set her apart from other star athletes, however.

"She's an outstanding athlete, an outstanding goalie, but more importantly she puts the team ahead of herself," Roth said. He noted that for the sake of the Vikings overall team success the first team All-Western New York goalkeeper played an outfield position during parts of her senior season.

Would she do likewise at Kent if the coaches ask her to play midfield?

Senn will study criminal justice at Kent State. The Golden Flash were 6-5-0 last year in the Mid-American Conference and 12-8-0 overall.

"I chose Kent because it's got a really nice academic program and the campus is beautiful," Senn said. "I met the coaches, and they really liked me and I really liked them. So it just seemed like the perfect fit."

Senn started in goal for three years for the Vikings, but GI coach Dave Bowman said he had the flexibility to play her in the field "and know that she was probably going to be one of the best field players that I put out there."

Senior Katlyn Holt, a teammate of Senn ever since they played U-10 soccer together, was one of several Vikings soccer players on hand for the ceremony.

"I think she's just a really relaxed player. As soon as she steps out onto the field, she knows what to do, when to do it," Holt said. "She's just overall a great team player."

"She's a great leader," Holt added. "She's an all-around great player, and she knows how to make the best ​decisions on the team. And she always does what's best for the team, and she's one of my best friends."

Senn joins a long list of Vikings soccer players who have taken their games to the next level. She credited the close bond with teammates as part of the Vikings tradition of excellence on the pitch.

"I think it's just because we're a small community and we get together a lot. I remember when I was little getting together and just playing," Senn said. "It's really tight-knit, and I think that helps too. It's like we've been playing with each other since we were like 9 or 10. We just grew up playing with each other, so it definitely helps with the family aspect of the team."

Senn has spent half her life playing soccer and includes travel soccer with Empire United on her resume.

"I think it's different from other sports just because it's like a thinking game," said of soccer, "But it's a physical game, too. I've been playing it since I was little, it's just something that has always interested me."

Senn said highlights of her Vikings career include the team's trip to the Far West Regionals in her junior year, playing her senior year with her friends, and beating Lewiston-Porter in a dramatic penalty kick shootout in the Section VI semifinals.

"It's so emotional for me because I'm so happy for her, and I feel so blessed to even witness this," Holt said of the signing ceremony. "But it's also sad to lose a friend and teammate, but I hope that we can still stay in touch and I wish her the best."