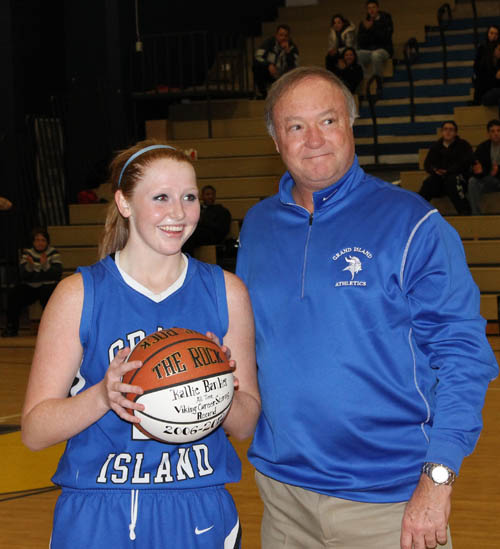 Needing eight points to set the record, the senior guard scored 15 in a 42-16 victory over the Wolverines to eclipse Carlin Hartman's record of 1,518 points that he set from 1988 to 1990. She drove the lane for a layup to set the new mark with 6:01 left in the third quarter. Officials stopped the game immediately, and GI Athletic Director Jon Roth presented Banker with a game ball to mark the occasion.

"It's really exciting. I've played since seventh grade, so it's great to finally hit that point mark," Banker said.

Though Banker is too young to remember seeing Hartman play in the late '80s, she said, "I know that he was a great player, and that's a great milestone."

"I'm really proud. She's worked really hard over the years. She's put in a lot of time and effort," said her coach and mother, Jen Banker. "I know Carlin, he's great. He's always made a point of calling and telling her, 'Great job.' I know that Jon forwarded an email from him the other day to me that said records are meant to be broken. He's glad it lasted that long. He's been really nice."

The Wolverines kept the game close and trailed 16-8 at halftime, but GI went on a 17-4 run after Banker's record hoop to put the game out of reach.

"I think that, after that, everyone was like, okay, now let's play basketball. Let's not worry about that," Banker said.

Nerves were an extra defender in the first 18 minutes of play.

"I wasn't aware of it till like right before the game," Banker said. "One of my friends from back at school was like, 'Hey, you have eight points till you break the record.' And I was like, what? And then I came here and I was soooo nervous. I was like, 'Oh, my God, I'm going to score three points and then everyone's going to be here and it's going to feel so bad. But thankfully I got it."

"She said something at halftime. 'I wish I didn't know about this thing.' I guess that puts a little bit of pressure on you," said Jen Banker, who set her own milestone with her 300th coaching victory the week before. "I just worry about the game. She would rather win than anything else."

"It's really exciting for me, but I'm also really worried about our team and winning as a team, too, not just about my own little records," Kallie said.

Niagara Falls Mike Esposito, Athletic Director John Forcucci and the Wolverines players were gracious in supporting stoppage of the game on their home floor to allow Roth to present a game ball to Banker immediately after basket.