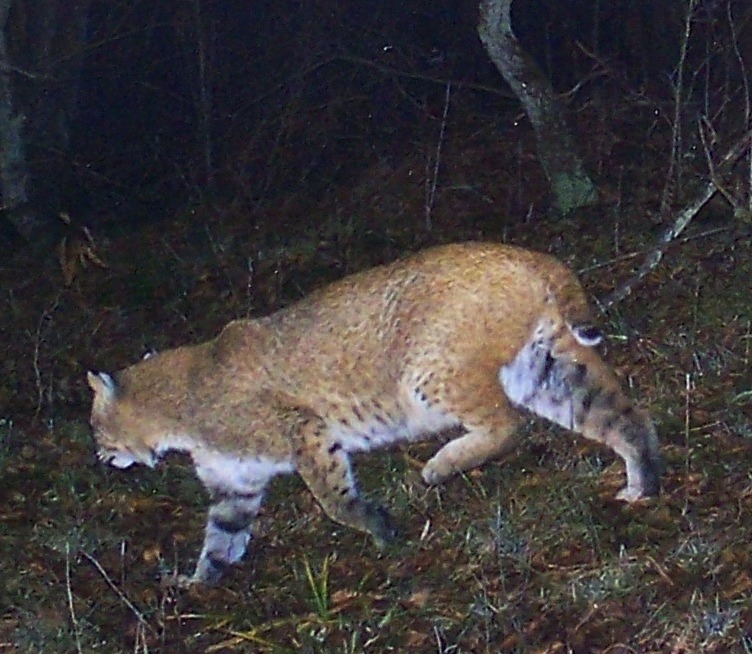 Bobcat sightings are on the rise in northern Niagara.

From the time I wrote the bobcat article until now, a lot of people have come up to me and said, "Gee, I think I've seen one of those things, too."

I agree, they are so fast, it is hard to believe your eyes if you do see one.

Needless to say, I feel a lot better after writing in the Sentinel about bobcats in the Niagara area. Now I know I'm not alone about what I saw. My friend, Mike Gillis, should rest easier too, knowing that our sightings collaborated our stories with what we saw were bobcats.

The emails and replies were fantastic as you can see, as you read down further.

Someone asked about the Canada lynx being mistaken for a bobcat. Yes, they could, but highly unlikely to be found around here. They are similar in appearance, same food habits, same delights for dinner, and habitat the same, and they even have the short tails and the pointed ears with the black fluff at the tip. They are a little larger in size, but extremely rare in New York state. The U.S. Fish & Wildlife Service (USFWS) has had them on the endangered species list all across the contiguous U.S., since early 2000. They are more docile than the bobcat, and habitat destruction, and competition with the more aggressive bobcat is the reason given for being on the endangered list. Obviously, bobcats are more adaptable to their surroundings.

George Green, a Lewiston resident who lives on Mt. Hope Road, between Garlow and Walmore roads, sighted one in his back yard, and his wife, and daughter are witnesses. George said he has deer and other wild creatures visit his backyard, and the night of his sighting, he went out on his back porch with his night vision scope to see what he could see, and he saw an animal on the hill in the back. George said he looked at it and thought, "What the hell, looks like a bobcat!" He called his wife to take a look and asked her what she thought it was. "As she was looking through the scope, I stepped out on the porch that turned on the motion light, and it lit up the area, and sure enough it had the brownish color and lighter colored belly, little tail and pointy ears." George said, "The light went out and we waved to turn it back on, but the animal had gone on the other side of the hill, and all we could see were eyes and ears."

George's mother lives next door, and has chickens, and she had noticed some have been missing lately. She said some roost in a small tree, and some roost in the barn where the door is always open. Aha, just what these critters eat for their midnight snacks! Chicken! I'll bet that barn door will be closed from now on.

Joe Kilmer emailed me and said he saw the bobcat article in the Sentinel, and it jogged his mind about his story. In mid October, Joe and his wife, Marie, went out one evening around 10 o'clock on their way to Bandanas for a bite to eat. They left Youngstown via Main Street, to Jackson Street, as they approached the curve to Old Lake Road, he started to accelerate and saw eyes glowing in the roadway. The object was low to the ground, no tail, stubby face and pointy ears, it happened so fast. It was heading into the fort, and he said, "I could not believe what I thought I saw or did not see." First, he thought it was a fox, and turned around as fast as he could while explaining to Marie what he thought he saw. Joe said he pointed the car into the road to the fort with his headlights shining, and saw nothing, it was gone that fast. Joe said, "I might have doubted what I thought I saw until today after reading your article. I have also doubted my wife's and father-in-law's sighting less than a year ago in the back field behind his house on Dickersonville Road, south of Langdon Road."

Joe DiMino, from Lewiston, and I talked, and he reported recording bobcats three different times on his trail cam, at his hunting cabin down near Wellsville. He said the first one he saw was recorded on his Trail-Cam in August just this past summer, and another in October, then the third in November. Also in November, while he was bow hunting, about 25 yards away, one ran across his path. He said it went so fast he couldn't get his camera out of his fanny pack quick enough, but he knew right away what it was.

Jim White emailed me and said one crossed right in front of him on Upper Mountain Road a while back, and there is no mistaking it was a bobcat. White also said there were reports of a black panther in the area, but that is highly unlikely here in New York state. According to the DEC: "No cougar (AKA panther, puma, cougar) sightings documented in New York State."

Thanks to everyone that responded to the bobcat story, it was very interesting for sure, and it was fun doing it.

Lewistonian Jerry Farrell and I attended a Niagara Pioneers Sportsman's Club meeting recently, and he gave the members a quick synopsis of his purple martin, and other bird-tagging activities over the past 25 years at the 3-F Club on Swann Road. I made notes, and took in as much as I could, and asked Jerry if I could contact him if I have any more questions regarding his purple martin tagging efforts for a future Sentinel article. Being the sportsman, and the only federally licensed bird bander in the area, he agreed wholeheartedly. Watch the Sentinel for a purple martin tracking story reported by a nationally, and internationally known local bird expert.