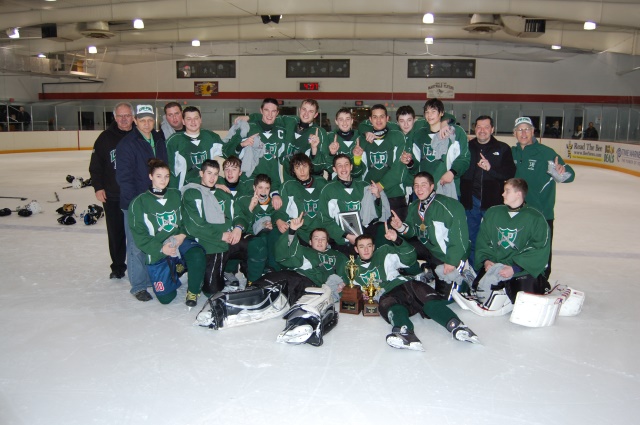 The Lewiston-Porter Lancers junior varsity club hockey team won the first-ever Cheektowaga JV Christmas Tournament with a convincing 8-4 victory over Frontier Central JV in the championship game played Friday, Dec. 30, at the Cheektowaga Recreation Center. It was the sixth game played by the Lancers during the week, as they bested 19 other JV teams in the tournament.

Leading the way for Lew-Port was tournament Most Valuable Player Joe DeMunda with two goals and an assist.

Justin Nichols started it off for the Lancers with a slap shot from the left point at 1:30 into the game. Joe Cecconi scored the Lancers' second goal, one minute later on an end-to-end rush while on the power play.

But eight seconds later, Mike O'Rourke scored the first goal from Frontier on a nifty pass from Ryan Hennigan.

Lew-Port responded 62 seconds later as DeMunda scored his first goal between the pads of Frontier goalie Nate Coughlin on a drive to the net. And just 33 seconds later, Joe Laurendi scored with assists credited to DeMunda and Matt Schiavi to close out a wild first five minutes of the game.

Hennigan scored for Frontier on an assist from O'Rourke to end the first period scoring.

Frontier fought back in the second period with goals from Tom Gavin and O'Rourke's second from Hennigan, knotting the game at 4-4. With one minute, 54 seconds left in the second period, Mike Mokhiber scored the eventual game-winning goal on a sharp pass from team captain Danny Hogan.

DeMunda scored a shorthanded goal with 8:52 left to give the Lancers a two-goal lead.

The Lancers played strong defense for the balance of the game with Mike Laurendi, Sean Richardson, Cecconi and Nichols all contributing.

Scott Meogrossi scored a power play goal on a rebound from a shot by Schiavi, and Chris Harvey closed out the scoring with an empty netter with 24 seconds remaining.

DeMunda and Hogan received first team honors as forwards and Nichols was chosen as a first team defenseman.

Earlier in the day Lew-Port earned its way into the finals with a 5-1 victory over West Seneca West.

Lew-Port was led by Lasky, turning away 23 of 24 shots in goal. Cecconi scored the first goal 37 seconds into the game on a pass from Hogan.

Richardson scored an unassisted goal in the second period.

Joe Laurendi scored with 12:35 left in the third on assists from Richardson and DeMunda.

DeMunda scored two minutes later on an assist from Cecconi. Meogrossi closed out the Lew-Port scoring on a sharp pass from Cecconi.

Bryan Wilds scored for West Seneca West with four minutes remaining to break up the shutout bid by Lasky.

The win advanced L-P to the finals versus Frontier.

Lew-Port scored both of their goals in the third period, with Richardson scoring the game winner with 9:14 left on a blast from the blue line. DeMunda scored an insurance goal with 1:03 left to move the Lancers to the semifinal game.

Lasky had the shutout in goal.