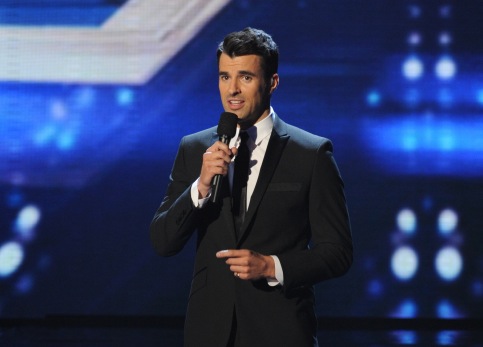 Seemingly, "The X Factor" host Steve Jones has a perfect job. He is paid a handsome salary to wear designer suits while introducing musical acts to millions of viewers. He has become a household name this season and probably doesn't lack for companionship each Friday night.

If you ask Jones, he'd probably say his "X Factor" gig is perfect. But, behind his calm on-stage demeanor, there is a whirlwind of activity as producers shout instructions through his earpiece, contestants quick-change, and judges, well, they just don't shut up, do they?

"It's been fantastic," he told a group of reporters, including BTS, on Tuesday. "It's been everything I hoped and much more. It's definitely measured up to the dream job status that I was hoping for. But it's tough, to be honest with you. It's tough. It's a hard show to do. It's kind of surprised me a little bit how hard the process is, the live element and steering the judges and all the rest of it. It's hard.

"It's hard to come across as a fun person and polite when you're steering such a beast and we're on limited time. It's surprised me how tough it's been. It really has. But I've enjoyed hanging out with the judges, and making new friends, and the production team. It's been amazing. I'm enjoying my new life here in L.A. I got a nice house, nice car. I'm paying my taxes. I'm a good citizen. I'm legit."

Jones, who is flattered by comparisons to "American Idol" host Ryan Seacrest, describes himself as "the guy who's trying to steer (the judges) in the right direction, that direction being, 'Stop talking now please, because we have limited time. We got to get a conclusion by the end of the show.' "

"In all honesty, it's -- two hours is a long time as such to start and finish any show, but we have the judges to contend with. And these people just speak endlessly. They will say the same points like five or six times in succession. For me that's the most difficult bit, because I relish every word these people say. They're interesting. They're funny. They're opinionated. They're arrogant.

"They're all of the above and that's the type of people that are fascinating to watch and listen to, but I'm the guy that has to cut them off, because, essentially, we are on limited time. So for me, that's the most difficult part of the job. Because I know everybody at home is enjoying what they're saying."

If curtailing the verbose judges' analyses seems difficult, it pales in comparison to refereeing them.

Jones was front and center when Cowell's prized Drew was unexpectedly eliminated from the FOX singing competition. Cowell, furious with judges Nicole Scherzinger and Abdul, refused to talk to Jones on stage. It was the cherry on top of what's become a volatile relationship among the four panelists.

"I definitely see traces of that backstage," Jones said. "It's very entertaining to watch, but one of the aspects of the show which has surprised me is the lack of theatrics. It's real. They have -- Simon was really (infuriated with) Nicole and Paula last week. He was livid. There are no theatrics. He wants to win. It's Simon Cowell. He's not really used to losing.

"He genuinely thought that Paula had used Drew as a pawn or something, which, I know for a fact Paula would never do. But Simon just felt like he was being attacked from all angles. It surprised me how nasty it can get on occasions. But these are very popular, very big -- I don't want to say arrogant, but let's just say big egos out there. None of them want to lose."

Jones, too, has appeared somewhat surprised at the voting results. Still, "I'm not one to argue with America," he said. "If America doesn't want Astro and Drew in the competition any longer, then that's their choice. I think anybody, out of any two people who are voted off the show -- last Thursday -- any two people leaving would have been surprising. They're all so talented at this level. The final seven were just insanely talented. So anybody leaving was going to be a shock.

"But when it's actually happening in front of you and, like Astro and Drew, it's difficult to comprehend. These are two people who could have gone on to win the whole thing. But that's how lucky we've been with the people we've found. Actually I say luck, (but) maybe the production team did an amazing job finding so many talented people? But anybody leaving at this stage will be shocking."