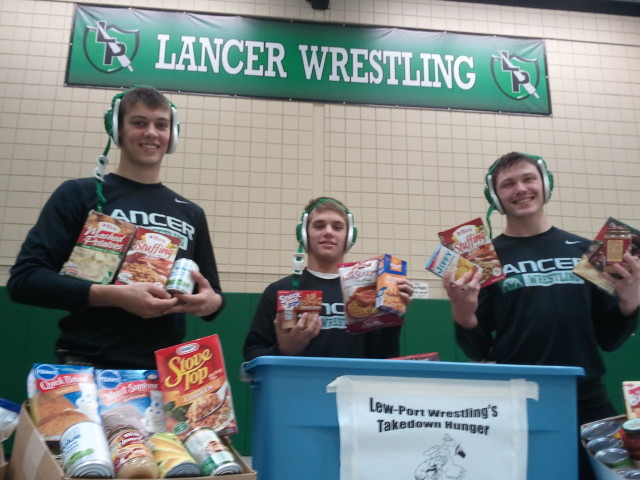 More than 160 items were collected in the Lewiston-Porter wrestling's "Thanksgiving Takedown Hunger Food Drive." The entire program had participated in this effort with donations from club, modified, junior varsity and varsity wrestlers and coaches. In addition to the team, there were also donations from Lew-Port wrestling alumni and friends, and L-P staff and teachers. The food was donated to Care-n-Share Food Pantry in Ransomville (http://icshope.com/food/). Lew-Port wrestling will expand next year's food drive and has already set a goal of 300 items.

The Lancers are coming off a great 2010-11 season that included the Section VI Tournament championship, a No. 14 New York state final ranking, and four state qualifiers. The Lancers started competition this week with modified wrestling on Thursday at Franklin Middle School. The varsity squad compete at the Grand Island Dual Meet Tournament this Saturday where they are two-time defending champions.

Both JV and varsity will compete next Wednesday in a NFL dual meet against Grand Island in the Lew-Port gym. The club program for wrestlers in grades 2 to 8 begins practicing on Dec. 5. To sign up or for more information on the Lew-Port Wrestling Club, contact club coach Bill Edwards at 940-8634.