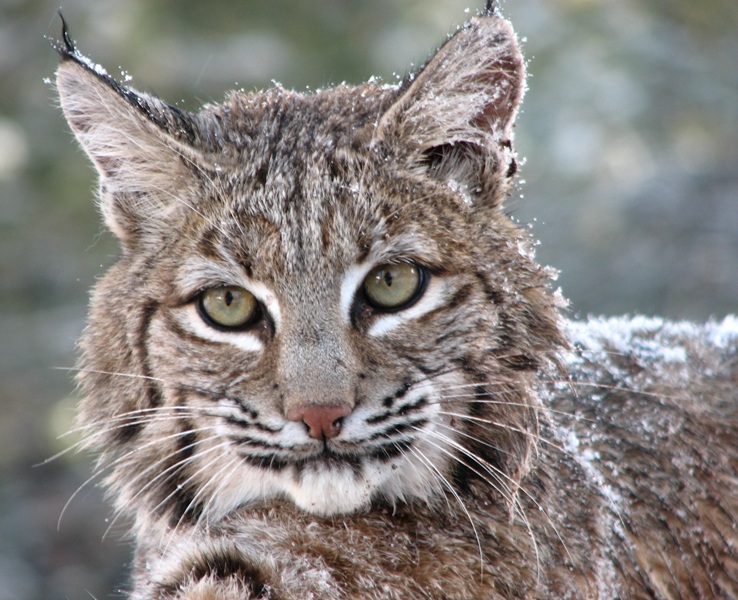 Are there bobcats in Niagara?

I recently wrote an article for the Sentinel about coyotes. I met a friend in Youngstown at Melloni's Market Place, and he told me he had read the article and asked if I heard anything about bobcats in the Niagara area.

That discussion brought me back to a time when I thought I saw one on the roadway, about 150 yards away looking at me from the road. I didn't see the whole animal up close, nor did I recognize it from that distance. It looked like an overgrown housecat or a stray field cat, but as I drove closer it sauntered off into the field at the side of the road. I kept my eye on that spot, and as I approached the area where it disappeared, all of a sudden I could see its hind end and the short tail. In about two jumps, it was gone.

About a month or so after that, I was in Bandanas on Lake Road and a friend and I got into a conversation about different things. He mentioned he had spotted what he thought was a bobcat near his house, but had only gotten a glimpse also. We both live in the same general area around Bandanas, and our description of what we saw were similar: short spotted tail, and brownish hindquarters. After our sightings, I did some investigating with area sportsmen/hunters to learn if they ever spotted any creatures around here that would meet that description, and no one ever even heard of one around here. Time had passed and I forgot all about my sighting until my friend in Melloni's Market asked me about these 'cats.

When I got home my curiosity made me Google bobcats in New York. These wily, secretive felines are interesting and live a good life, mostly nocturnal, but can be seen in daylight at times, and sighting one is extremely rare. Their diet is similar to a coyote, believe it or not: rabbits and rodents, birds, insects, even fish and they have been known to prey on deer just like its coyote friends in the wild. They are natural born survivors and live around 12 to 13 years, and according to some sources, six to eight years. Males are usually between 32 and 37 inches long and weigh about 28 pounds. Females are anywhere between 29 to 34 inches and the petite little things hit the scales at an average of 15 pounds. It had to be a male that I spotted; it was big.

From descriptive pictures I have seen, colors vary from yellowish brown, light gray, reddish brown, and buff brown, probably like the one I saw the back end of. They are spotted along the sides, some more than others, and the tail is between 6 to 8 inches, multi-colored, spotted, black on top and white on the bottom.

"Bobcat" is so called because of its "bobbed" tail. The face is cute and bright-looking, with furry black tufts at the top of its sharp pointed ears, long fur at its cheeks and whiskers like your domestic cat. They like to make their homes in secluded places like rock piles, brush, hollow trees and logs, and ledges where they can pounce on their prey sight unseen. They don't like human activity and keep to themselves. Predators are few, deaths occurring mostly from disease such as rabies, or from their prey, in self-defense. If you are out in the winter or spring you can tell bobcat tracks by their looks and size. Showing four toes without claws they are about two square inches, which are larger than your house feline, and if they are running, the stride is between 4 and 8 feet.

So, are there bobcats in Niagara? According to the people I talk to it is highly unlikely, but what was it my friend and I saw? I think we saw a bobcat, and more than likely we both saw the same one. If you have had a sighting in your travels or spot one in your future travels, I would be interested in knowing; please contact me.

Maybe if you want to actually see a live bobcat you would need to find a zoo with one, but if you do have a sighting in the wild, by all means get a hold of the Department of Environmental Conservation office in Buffalo and if you can, get a picture to verify your sighting so it can be recorded. The DEC Buffalo number is 851-7201.

For up-to-date fishing reports in our area be sure to check out www.OutdoorsNiagara.com for the latest. Right now, steelhead fishing in the Lower River is going quite well. If you are fishing from shore or boat, fishermen are using eggs, egg sacks, Kwikfish and a variety of spinners and spoons. Wilson and Olcott pier fishermen have been very successful.

If you have something to add, contact me at [email protected] or go to the Outdoors Niagara website. There you will also find an archive of my recent Sentinel articles on the Sentinel Page.