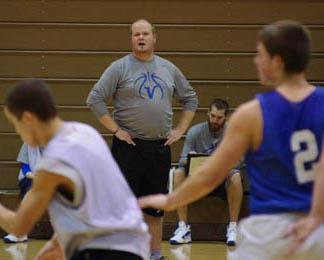 Story and photo by Larry Austin

Grand Island began its boys basketball season Wednesday with a host of new faces in a scrimmage against visiting Newfane.

"If we could bottle up the first quarter, we're going to be all right," said coach Nate Beutel after the last whistle. "If we play the way we did the rest of the time, it's going to be a process. I think our youth showed a little bit."

GI was outscored in most of the periods in the controlled scrimmage and struggled against pressure defense as it did last season when the team finished 3-17.

"Every day we seem to go over the same things, but with a young team I think we just need to do that," he said. "I think it's just about getting reps in and continuing to work on those small details. As minute as you might think, they're that important to younger kids."

Beutel said the team will have three newcomers in the top six this year: Quinn Carey, a freshman, and sophomores Ryan Ross and Jadon Wegrzyn. Carey is the team's best scorer, Beutel said.

Seniors Dylan Kelly and Jon Voyzey are back in the frontcourt, though the latter is battling a knee problem. The guard-heavy team has help inside from Sam Oursler, who is new to the sport but is very athletic, and A.J. Jasek, who hasn't played since modified.

"He's going to help us in the middle," Beutel said of Jasek.

Nick Soos is slated to start at point guard, Beutel said, and Ryan Miller and Josh Miller played major minutes in the backcourt a year ago. Up from junior varsity are Jordan Jelks, Corey Adamshick, Jake Sweeney.

GI doesn't have a home game in 2011. Beutel will take his team to Mapleton Road in Pendleton to face his alma mater, Starpoint, for the season opener Dec. 6. The Niagara Frontier League season begins Dec. 16 at Niagara Falls, but the home opener isn't until Jan. 3 against Kenmore West. That's fine by Beutel.

"If you look back at last year, we played better on the road. We were really, really bad at home."

I'm not saying that's going to be the same way this year."