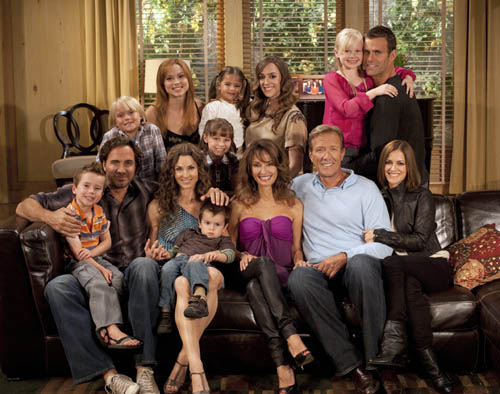 Members of the cast of "All My Children." (photo by ABC/Rick Rowell)

'All My Children' creator talks about the show's ending, characters and online future

The year was 1970. Eager viewers awaited what perhaps was one of the greatest sensations to come to ABC in soap history. Thanks to the beautiful and talented creator and writer, Agnes Nixon, "All My Children" was born. The ABC soap focused on unforgettable and memorable drama in a Pennsylvania suburb, global-rising social issues and, of course, the one and only Erica Kane, better known as Erica Kane Martin Brent Cudahy Chandler Montgomery Montgomery Chandler Marick Marick Montgomery.

So, how did Nixon create, produce and write a successful, 41-year soap opera she thought would only last 26 weeks?

In a phone interview with Nixon, she explains "All My Children" through the good - the fabulous and happy storylines; the bad - tear-jerking scenes ending in death and sadness; and the ugly - the cancellation of the show.

"I never thought it would be such a long run," Nixon says. "I'm very grateful for viewers who supported the show through all the years. I feel I had a great joy at the relationship I had with them (the viewers)."

Where did all the great story ideas arise: Erica wedding 10 times; Adam tying the knot 13 times (two being Erica); Tad "the Cad" sleeping with Liza ... and her mother; Jesse returning after 20 years of being presumed dead; and David faking his own death, just to name a few.

"When I was 8, I wanted to be an actress," Nixon says. "I also wanted to be a writer. I wrote little things. I went to Northwestern University, and I was in the same classroom with actors and actresses like Cloris Leachman. When I started to write, I would sit in my studio and empty my mind. It would be my real world of make believe."

From Oprah Winfrey to Carol Burnett, "All My Children" had a great fanbase and celebrity-based following.

The look-back at the four-plus decades in Pine Valley started with Lucci portraying Erica Kane, an outspoken, confident and vivacious teen.

"The reason Erica was so popular was because I wanted to write about a teenage girl who wasn't scared to talk back to her mother," Nixon says. "That's what made her unique. She had spunk. I remember one scene between her and Mona (her mother). Erica said to her, 'Mother, I think you watch way too many soap operas!' and her response was, 'Erica, I don't have to watch soap operas.' It was just so much fun."

There have been many happy storylines, such as Noah and Julia's fairytale wedding, Palmer and Opal's undeniable love connection, and scenes with Adam and Stuart. But what perhaps is one of the show's greatest storylines is much more recent.

Dr. "Evil" David Hayward had been doing extensive research and keeping a deep, dark and dirty secret from Pine Valley families. He was keeping their loved ones hostage, as they were pronounced dead. Through his miracle and "godly" work, he produced Project Orpheus to nurse his patients back to health. Amongst these patients was Greenlee, who died after a motorcycle accident on her wedding day; Zach, who died in a sabotaged plane crash; Dixie, who died from poisonous pancakes; and Pine Valley's finest, Stuart, whose twin brother, Adam, was shot dead after a drunken night.

"Project Orpheus was a unique way to bring old characters back," Nixon says.

"I tried telling the stories of real people through social topics. We tried to keep current with the daily newspaper and what's going on in the world," Nixon says. "We created lots of stories that have helped people through their lives. We had to do a story in a way that people would watch."

Bianca Montgomery was another unique character. At the age of 9, she developed anorexia and had to be hospitalized. Using her excellent acting skills, Lucci won her first Daytime Emmy for the Bianca-anorexia story. Bianca had another secret to reveal to her mother and loved ones in 2000: She was a lesbian. She became the first openly gay character in a soap opera.

"I waited two years until it could be revealed Erica's daughter is a lesbian," Nixon says. "At first, Erica acted like a homophobic person, but then she made the transition to a total acceptance. I think it helped to erase prejudice about the gay life, and to accept everyone for who they are."

And then there was Cindy and Stuart, two star-struck lovers with unbreakable chemistry. When Cindy contracted AIDS from then-husband, Fred, something unusual happened: her loved ones did not leave her side when discovering she had AIDS. If Stuart, the heart and soul of Pine Valley, could accept the woman he loves even though she has a life-threatening disease, then why couldn't everyone else?

JR was affected by alcoholism for years, including when he was diagnosed with cancer. After being sober for a while, it seemed he had it all - a loving son, wife, successful business and beautiful house. But then everything changed. His wife became a lesbian with Bianca, she took his son after discovering he was once again drinking, the Chandler business went under, and the house fell into foreclosure.

Feeling like he lost his good fortune, JR snapped. He wanted to seek revenge on his wife, father (Adam), mother (Dixie) and David for making him believe his first wife was actually alive. In the finale, the last scene showed a party in Chandler mansion where residents of Pine Valley joined together to celebrate Stuart's return. In the meantime, JR was in a closet drinking heavily with a gun in hand. With that, the very last shot showed JR opening fire and the scene went black.

"JR was depressed," Nixon says. "The ending was just like the finale from 'Dallas,' who shot JR? And on AMC, who did JR end up shooting?"

"All My Children" is set to resume its storytelling in January 2012, where the show moves online. Perhaps it will answer some unanswered questions? For instance,

Who did JR shoot? Could it possibly have been the one and only Ms. Kane?

What will happen to Erica?

What will be JR's fate for shooting someone?

Who is the other patient presumed "dead" whom David has been nursing back to health?

Will Tad and Dixie get married ... again?

Will Kendall and Zach really have their happy ending with Griffin entirely out of the picture?

Tune in to the online series, where familiar faces will once again be seen.

"All My Children has enriched my life," says an appreciative and enthused Nixon. "It's been a marvelous part of my life. I hope it goes on the Internet to Prospect Park. If it doesn't, I'm grateful for all the happiness it brought to my life and the viewers' lives. It's truly a gift."

And as Nixon said on "The View" and again in this interview, "After all, they are all my children."

Congratulations to Nixon, Lorraine Broderick and the other writers who helped make "All My Children" a successful and wonderful 41 years in business.

•Following this interview, it was announced that production company Prospect Park would, indeed, air new episodes of "All My Children" in 2012 via The Online Network.
Categories
Behind the Screens Entertainment