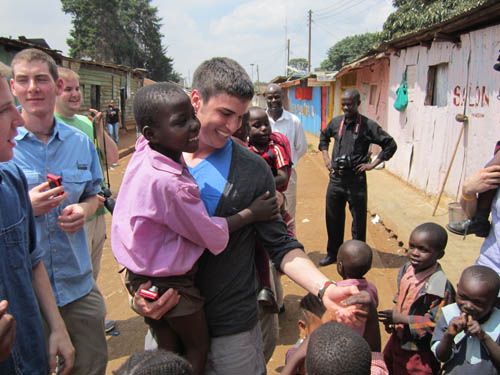 N-W grad Michael Pittman is shown with some of the children he met in Kenya with fellow members of the University of Rochester's YellowJackets.

N-W grad seeing the world, singing on TV with the YellowJackets

There was a familiar face on the opening of Season 3 of NBC's show "The Sing-Off" on Monday night.

Michael Pittman, a 2009 Niagara-Wheatfield graduate, is now a junior at the University of Rochester and a member of it's a cappella group the YellowJackets. The group opened the show, and was not one of the two groups voted off, so local fans can catch them (and Michael) again on the Oct. 3 show. The Sept. 26 show features the second half of the competitors.

"Being on "The Sing-Off" was such an incredible experience for many different reasons. The best being that, yes it was a competition, but we formed such strong, unified friendships with the other groups on the show, that it didn't feel like we were competing against one another," Pittman said. "I have made friends with whom I will always stay in contact and will continue visiting for the rest of my life."

The show was pre-taped this summer in Los Angeles, except for the finale, so for the premiere show Monday night, the University of Rochester invited students, parents and the community to the campus for a big screen viewing party. The YellowJackets sang before the show and answered questions during commercials.

"You have never seen 15 boys so wound up in your life. They were that excited," said Pittman's mother, Lori. "The auditorium was packed."

Monday night's show was a performance the YellowJackets almost missed. Auditions for the show were scheduled during finals week last spring. When an NBC producer who had heard the YellowJackets' CD "Bad Bromance" called to specially ask that they audition, exams were rearranged. The CD was nominated for a CARA (Contemporary A Cappella Society) award. Michael has two tracks on that CD.

The a cappella group members took some exams before they left, drove all night to New York City, auditioned, then returned to take the rest of their exams.

"My favorite part about being in the YellowJackets is that, even though we are 15 members, we are all like brothers to each other. We have shared such amazing experiences together and we have become so close, that it's hard being away from them, even if it's for just a few days," Michael Pittman said.

The family feeling extends to parents and alumni, many of whom traveled to LA for the taping.

"I was lucky enough to go twice," said Lori Pittman, former Niagara-Wheatfield Board of Education member. "We wore bright yellow T-shirts that said 'I love the YJ'S.' It was great! The Jackets are an amazing group of young men. They are so goofy, funny and smart. Just to see them together makes you smile and that is the reaction of anyone around them. You will always get at least one hug from each of them."

The YellowJackets are celebrating the group's 55th anniversary this year and their concerts are attended by many alumni who are all invited on the stage to sing the final song.

Being a member of the YellowJackets has taken Pittman practically around the world.

In May of 2010, the YellowJackets traveled to Europe for three weeks. During spring break of 2011, they traveled to Washington, D.C., and performed for Congresswoman Louise Slaughter and also at the Kenyan Embassy. The Kenyan ambassador was so impressed with them that he paid for all their visas to Kenya and even came to speak at the group's spring concert at the university (giving up a speaking engagement at Harvard to do so).

While waiting for "The Sing-Off" audition results, the YellowJackets were off to Kenya for almost a month. They stayed in a small village called Maseno where they did service work and recorded a CD with Kenyan schoolchildren. The CD and a full-length documentary are coming out this fall.

"Going to Africa to work with the school children and visiting orphanages opened our eyes to a totally different way of life, and it was amazing because we got to experience it together," Michael Pittman said.

"The experience changed their lives - the stories they tell are heart wrenching," his mother added. "The Jackets took their own money and bought mattresses for an orphanage because they were so distressed that the children had to sleep on towels. There are so many stories it would take a book to tell it all."

The Kenya trip inspired the group to use "Wavin' Flag," performed originally by K'naan, a Somali-Canadian poet, rapper, singer, songwriter and instrumentalist, for their debut on "The Sing-Off."

"Since we had such an amazing time in Africa, we decided that would be our signature song," Michael Pittman said.

Pittman, who gives credit to the N-W music program and his teachers there, Ken Fick and David Curtis, dreamed of being in the YellowJackets since high school.

"It was a group I wanted to be a part of because they had such a following in the a cappella community," he said.

For more information on the YellowJackets, check the group's website at www.Jackets.org, their Facebook page, or go to NBC's "The Sing-Off" site.