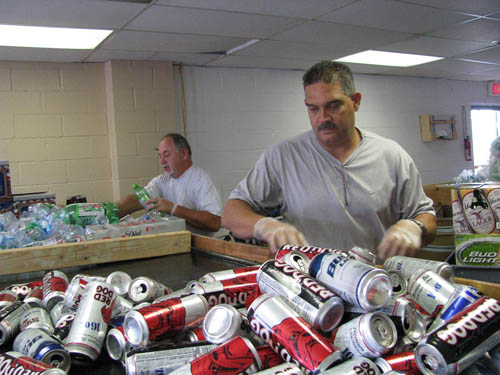 People with bags and boxes of returnable cans and bottles are happy customers at one of Wheatfield's newest businesses, Bottle Junction.

"This is the best thing going!" exclaimed Bergholz resident Louise Schildhauer last week as she left the business at 3050 Niagara Falls Blvd. "As soon as they see you pull up in the parking lot, they come out and help you unload your car. It's unbelievable! Why stand in line at the stores?"

Schildhauer makes returns on behalf of Holy Ghost Lutheran Church. She estimated it would have taken her an hour and a half to feed the bottle return machine at the grocery store with the $50 worth of bottles and cans that had been donated to the church. Instead, she was out in less than 15 minutes.

Inside Bottle Junction, retired civil servants Gary Herman of Corfu and Ray Pabon of Lockport are working in a clanking symphony, counting and collecting piles of bottles and cans. They are partners in the business with Jeff Cheacacci of Akron.

Similar stores have been opened in Akron and the Rochester area, but this is the first of its type in Niagara County.

"People like our service. Our business is growing," Herman said.

Not only do they take the hassle out of returning large numbers of bottles and cans, they are willing to set up accounts for organizations to make it easier for people to support local groups. Accounts already have been set up for various churches, sports teams, an ambulance service and even the Susan G. Komen for the Cure (cancer) fund. People who want to donate to one of these groups can come in and sit their bag of recyclables on the counter and not even have to wait for them to be counted; the money will be added to the account requested.

"It's just an easy way to donate," Herman said.

The business owners' hands fly as they rhythmically count the returnables.

"After you do it for a while, it just comes natural," said Herman who credits his teachers growing up for providing him with good math skills. "I count by fours."

By the end of the day, you would think he wouldn't want to see anything in a bottle or a can by the time he gets home every, but Herman looks forward to a cool drink.

"It's a personal investment," he says with a laugh.

Bottle Junction is located between Nash and Ward roads, in the strip plaza that used to house Napa Auto Parts. It's open 10 a.m. to 5 p.m. Monday to Friday and 9 a.m. to 4 p.m. on Saturdays.