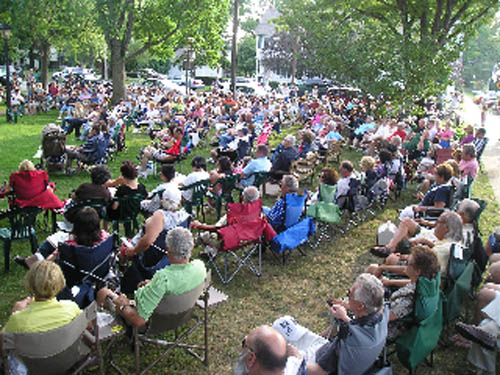 LCA celebrates 17 years of blues and jazz, rock and roll

The Lewiston Council on the Arts will once again be presenting plenty of free, great music this summer with Blue Mondays, the "Summer of '69," and the Lewiston Jazz Project.

All concerts are free and open to the public.

•"Summer of '69": "Tune in, turn on and reunite at the region's grooviest summer happening of the year!" says the LCA's Eva Nicklas. "Summer of '69" features some of Lewiston's favorite rock bands from the '60s, including the Loved Ones, County Orphanage and the Invaders. Grammy-winner Gary Baker is also on stage.

•Blue Mondays: It's considered some of the best blues in Western New York, says Nicklas. "Past recipient of the prestigious Muddy Award, this eagerly awaited series started out as a single Monday concert 16 years ago. Now, a series of six concerts featuring the very best regional blues, the event attracts a faithful following of blues lovers from all over WNY and Canada."

All LCA concerts are at the Hennepin Park Gazebo, Fourth and Center streets, and get under way at 7 p.m. Concerts include: July 11, Harmonica Dean & the Blue Lights; July 18, Four in Tune; July 25, Rod Nickson Project; Aug. 1, Blues Hounds; Aug. 8, Heavenly Chillbillies; Aug. 15, Steve Burnside and the Original Marquis; and Aug. 22, Caitlin and the Jamie Moses Band.

Check out www.crossborderblues.com for more on binational blues concerts in the area.