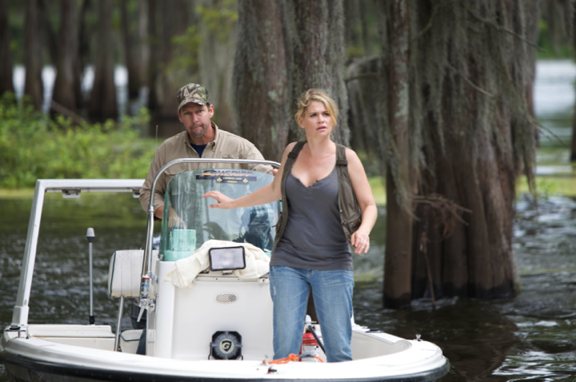 You've got to hand it to the folks at Syfy: They've really outdone themselves this time.

The cable channel, which has blossomed into the home of original, B-movie camp, has set sharks and gators in opposition with its latest Saturday night feature, "Swamp Shark." And, if that's not enough, the network assembled an all-star team of cult movie actors (including the original Buffy, Kristy Swanson; "The Goonies" and "Die Hard" star Robert Davi; and D.B. Sweeney of "The Cutting Edge" and "Spawn") to fight the creatures.

Right before the start of "Gator Fest," a mysterious creature (Swamp Shark) enters the Atchafalaya Basin in Louisiana and soon begins to wreak havoc on the youngsters looking for a weekend of debauchery. Rachel Broussard (Swanson) and Charlie (Sweeney) seek a means to take the monster down, much to the dismay of the local sheriff (Davi), who seems to have ulterior motives.

The actors, and co-star Wade Boggs (formerly of the Boston Red Sox), jumped at the chance to work with one another.

"I got a phone call from the agents and they said, 'Hey, there's a Syfy movie called 'Swamp Shark.' So I was immediately intrigued by the title, because I have a 10-year-old boy where all he does on YouTube is look for swamp shark images. And him and his friend - his 10-year-old friends - gather around that computer and they go, 'Wow, look at this shark thing.' So when I heard 'Swamp Shark' I said, 'Send me the script,' " Davi said. "I then read the script, and I enjoyed it - it had a great sense of fun; it had a great sense of humor; it had the tradition, of course, of seeing a film that was shot in Louisiana in the Bayou, which is a great location - a sort of a different place to put a shark - and I then asked them to, you know, the directors and the producers that had some ideas about the character and they were very open to that. And the process started forward and then, of course, the beautiful Kristy Swanson was involved."

"I also got a phone call from my agent to read the script and I thought that the title of it was very interesting as well," Swanson said. "And then I heard Robert Davi was on board and I'm a big fan of him and a good friend of him, and so I thought this would be a really good experience to work with him and be a part of the project. I really liked the character that I would be playing. She's a very strong female role and I'm always attracted to that."

"The reason I got in, I heard Wade Boggs was in, and I'm a big Red Sox fan - a big baseball fan," Sweeney said. "I know Robert and Kristy and it sounded like it was going to be a lot of fun and it certainly was. And I went to school in Louisiana for a while, so I love that part of the country and it was just a lot of good reason to do it."

"I was in a golf tournament in Orlando with Jeff Chase and he plays the Swamp Thing, and he asked if I would be interested in doing a bit part in a movie that he was doing down in Louisiana -- for up in Louisiana rather -- and I said, 'Absolutely,' " Boggs said. "Being a baseball player, you're a ham any way. ... (I) got an opportunity to play somebody other than myself in an acting role. So I was really looking forward to it and just had an absolute blast with meeting Robert, and D.B., and Kristy, and the whole cast. It was really a special opportunity for me."

In terms of the monster in "Swamp Shark," Swanson said, "he's a lot more different looking than any other normal shark."

"I've seen the movie and I think it's really great and it's really fun and it's got a lot of suspense and interesting stuff, and it takes place in a really beautiful part of the country and I think that you'll really enjoy it," she said.

I'm sure we will.