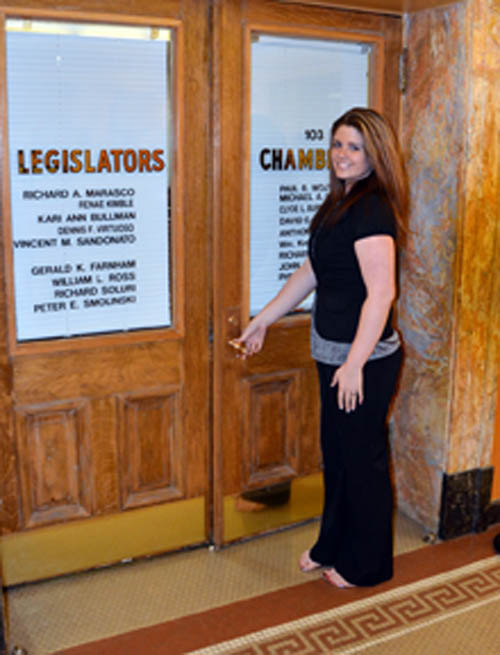 New 6th district Legislator Brittany Catchpole, D-Town of Niagara, is on her way in the Niagara County Legislature. (photo by Marc Carpenter)

Lawmaking by day, prom by night

It's a memorable week for Brittany Catchpole of the Town of Niagara.

Tuesday, she was sworn in as 6th district Niagara County legislator. On Friday, the Niagara-Wheatfield High School honor student will attend her senior prom.

At 18, Catchpole is the youngest county legislator ever. Former Legislator Lee Simonson of Lewiston, who served the county for 32 years, previously held that record. He was first elected at the age of 20.

Catchpole will serve the remaining months of the term of former Town of Niagara Legislator Danny Sklarski, who resigned in April to return to the Town of Niagara Town Board as a councilman.

"I plan on living here the rest of my life ... for my family, my kids, my grandkids, it's going to be home. I want to help my neighbors," she said.

Ross said Catchpole earned the respect of the interview committee and was their unanimous choice.

"I've seen some legislators over the years who never attended a Legislature meeting until they were sworn in," Ross said. "She did her homework."

Catchpole was part of the Legislative Intern Program, organized by Cornell Cooperative Extension of Niagara County, for three semesters. During that time, she was assigned to Niagara Falls Legislator Dennis Virtuoso and attended many Legislature meetings and committee meetings. As an intern, she also met with many of the county's department heads.

Ross said Catchpole is not afraid to ask questions and is very tactful and diplomatic.

Ross added that he hopes the appointment of Catchpole might inspire other young people to get involved in local government.

Catchpole said her mother, Melissa Voutour, has been the guiding force in her life. "She's always pushed me and kept me on the right path, which is why I'm 18 and a legislator!" Her mom and sister Jenna, 11, stood by her side while she was sworn in on Tuesday.

Catchpole isn't worried about the combination of being a legislator and a new college student at Niagara University, plus campaigning this fall. She's looking forward to meeting her constituents.

At Niagara-Wheatfield, she is president of the Rotary-sponsored Interact Club and through that group has done community service with Community Missions and HANCI. She also volunteers at Niagara Falls Memorial Medical Center and has a part-time job at Marshall's.

At NU, she will major in event planning and hopes to eventually open her own small business, possibly involving weddings, sports or concerts - "I don't know which yet."

As a legislator, she wants to work on expanding and promoting small businesses in the county so they can collectively boost the economy.

"I want to follow in Renae Kimble's footsteps and work with Sam Ferraro (economic development commissioner) and continue the progress we've already made with microenterprise," she said.

"She's very bright, intelligent and eager to learn," Virtuoso said of the former intern who used to sit beside him at Legislature meetings, but now has her own seat.

Catchpole will still have much to learn about aspects of county government, politics and people skills, he said, but added, "I'm still learning, even after 20 years. You never learn it all, believe me. ... It's like running a big corporation."

Asked what kind of grade he would give Catchpole for her work with the Legislature, Virtuoso said, "I would say she is an A student."