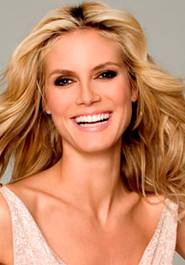 'Clash of the Commercials: USA vs. The World' airs May 23

"Clash of the Commercials: USA vs. The World," hosted from Las Vegas by legendary supermodel Heidi Klum and actor John Lehr, is an interactive countdown special pitting the 10 best international commercials ever against the 10 best from the U.S. The special, in which viewers will be able to vote live for the winner, will be broadcast Monday, May 23 (10 p.m., ET/PT), on the CBS Television Network.

From the producers of "Super Bowl's Greatest Commercials," "Clash of the Commercials: USA vs. The World" is an online and on-air competition for the greatest commercials of all time - and viewers decide which one wins. Viewers can go now to www.cbs.com/specials/clash_of_the_commercials to watch the top 10 ads from the USA and the top 10 international commercials to vote for their favorites.

The winning commercial from each category will be revealed during the show and, in a special live vote during the broadcast on www.cbs.com/specials/clash_of_the_commercials, viewers will decide which commercial take home the top prize.

In addition, the special will feature other top commercials from both the U.S. and the rest of the world in categories such as animals, cars, sexiest and most outrageous commercials, among others. Viewers will hear from advertising experts on what makes these commercials the best and get a look behind the scenes at the making of some of these spots.

Klum is a major star in the fashion and entertainment world. Having established herself as a top model, making great impact for such clients as Victoria's Secret and appearing on the covers of pop-culture mainstays, including the Sports Illustrated swimsuit issue, Klum's career has taken many new directions. She is the host and executive producer of the six-time Emmy-nominated series "Project Runway."

After finishing its sixth season, "Project Runway" was the highest-rated program on cable. Klum also hosts Germany's "Next Top Model," which is a runaway hit in that country. She has written a lifestyle book, "Body of Knowledge: 8 Rules of Model Behavior," and her other ventures include two self-designed collections for maternity lines: A Pea In the Pod and Motherhood Maternity, a sportswear collection for New Balance sold exclusively on Amazon.com. She also participated in campaigns for Diet Coke (for which she was the spokeswoman for the Red Dress/Heart Health initiative for four years), Ann Taylor, Dannon, McDonald's, Volkswagen, Lenscrafters and Braun (for which her legs were insured for more than $2 million).

Klum's charity involvement includes work on behalf of organizations such as the American Red Cross (as part of its Celebrity Cabinet), the Elizabeth Glazer Pediatric AIDS Foundation, Baby Buggy and the Worldwide Orphans Foundation Gala.

During downtime at shoots, Klum cultivates her creative talents, sketching ideas for her jewelry, clothing and shoe lines, as well as crafting new ideas for her ever-developing businesses and interests.

Lehr, best known to television audiences as a caveman in the popular Geico commercials, has appeared in numerous television commercials for products such as Tylenol, Doritos and Pepsi, as well as in television programs including "Jesse" and "10 Items or Less." His feature film credits include "The Sweetest Thing," "Mr. Jealousy" and "Kicking and Screaming."