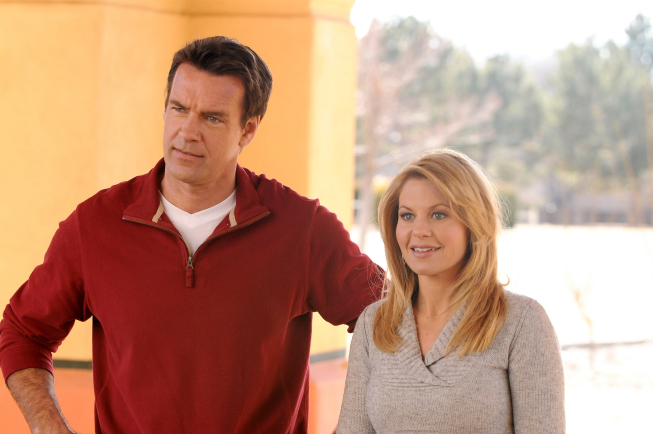 It's funny how things change.

At the end of the 1980s, Candace Cameron was entertaining millions as D.J. Tanner, the oldest of three daughters on the hit ABC "TGIF" comedy "Full House." At the same time, FOX was trying to make a name for itself as a rebellious, anything-goes network by launching shows including "The Simpsons" and "Married ... with Children."

Three decades later, Cameron, now married to former NHL player Valeri Bure and a mother of three, and FOX are teaming up to present the latest Family Movie Night film, "Truth Be Told."

"I'm a big supporter of Family Movie Night, so I had seen some of them before and really had wanted to be a part of one," Cameron Bure says. "So when they asked me to take a look at the script, I was super excited knowing this was part of the Family Movie Night initiative. I thought the script was adorable, and as a mom that really supports quality family programming, I jumped onboard right away."

In the film, Cameron Bure's character finds herself in a precarious position with a potential beau, played by "JAG" star David James Elliott.

"Well, it's a fun little romantic comedy for the whole family," she says "It is based on my character, Annie Morgan, who is offered her own radio show under the false pretenses that she's married. So not wanting the lose the job offer, she talks to her old college friend, played by David, and convinces him to pretend to be her husband for the weekend and his kids to be their kids. So it's about this one little lie that snowballs into a big, huge mess, and just has a really great point that honesty is always the best policy. It's just one of those fun movies that you can sit down with the entire family and all your kids and watch something that's entertaining, but kind of have a good life lesson to talk about."

Of course, FOX and Cameron Bure are not the only ones to have changed since the decade of Madonna, Rubik's Cube and "Saved By the Bell." The television industry - the quality of roles and availability of opportunities - has changed significantly since Elliott starred as a judge advocate general and Cameron Bure played house with Bob Saget, John Stamos and the Olsen twins.

"Well, I think what excites me is there are certainly more avenues for programming," Elliott says. "Having grown up with the three television stations ... the three networks, that was all we had when I was a kid. Now it's like an ocean of programming opportunity, and things are changing. There's a lot of downsides to it, and there's some upsides. Network (programmers) definitely have a new challenge finding their audience is continually moving to the cable programming, which has less standards-and-practice things to stymie their artistic output.

"So, networks like FOX and the others are being forced to find their avenue, and certainly I guess FOX is embracing the fact that there is a definite market for this type of programming. I applaud it. I think it's great. ... It's tough to find stuff for the family out there, so hopefully it continues."

Cameron Bure says it's "Awesome that there's a lot more choices with the amount of stations that we have, but because of that - and like he said with the standards-and-practices being much more lenient on those cable networks - I've found over the years there's such a division now of programming for adults. Then very specific programming for children, which can be good at times, but in that - and I really find in the last 10 years that that took away from family programming in general.

"So we have all those old shows like 'The Cosby Show' and 'Family Ties' or 'Who's The Boss' or 'Full House' - those types of shows that really just disappeared. ... And 'JAG.' They just kind of disappeared and that's the part that, as a mom now and having young children, that I wish there were more television shows that I could sit down with my kids that weren't just specific to them or just specific to me.

"I'm happy now that because there are so many stations now every station is trying to find its own, and I'm happy that some of the major networks are now coming back and saying, 'Hey, there are people that still want that - that quality family programming.' I'm happy to be a part of that. I'm an advocate for it, and I believe everyone can have their choices, but let's not get lost; that this is definitely something in America that families want and desire."

Cameron Bure and Elliott, who both admit they had instant chemistry on camera, enjoyed bouncing ideas off each other - and discussing what's it like to be known for playing an iconic role.

"I just asked David what the difference was between his show and my show," she says. "I want to know how his show ran, how everyone got along, who he still talks to. I guess I'm probably asking him the same questions that the fans ask, and vice versa, but it is kind of fun to compare, because it's a very specific time period when you're on those shows. So, yes, I mean, I guess it was just fun to bounce questions off of each other. Yet, times have changed so much, and series are so different now, and movies, to me, so it's fun to reflect."

"You know what's great about it? There are two things that are great about it," he adds. "We had a lot of common things to deal with: fan bases and people recognizing you and approaching you out on the streets. It's always good to have somebody who kind of understands the challenges of that.

"Also the professionality. I mean, the fact that we've both been in front of the camera for so long that there's a lot of things that when you work with somebody who hasn't had the opportunities that we've had to work the craft consistently like that ... it really helps to move things along quickly. You don't have to school anybody. You don't have to wonder what they're going to do when something specific, some little glitch happens. The more you've done it, the quicker you roll from it and the more you continue on.

"You know, if somebody flubs a line, you don't blow the whole take. They just go back, just go back, they can roll easier with the little problems and we can get the day done faster and we can - and the work is better because of it. So it's always great to work with somebody with the experience that Candace has."