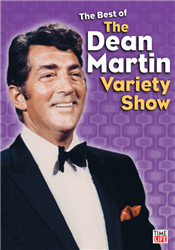 "The Best of the Dean Martin Show." (NBCU photo)

'The Best of the Dean Martin Variety Show' to be released

NBCUniversal Television Consumer Products and TIME-LIFE have announced the release of three new DVD collections featuring "The Best of the Dean Martin Variety Show," to be released May 24. "The Best of the Dean Martin Variety Show" sets capture material never before released from some of the show's greatest episodes during its nine-year run on television from 1965-74. Hosted by Dean Martin, the acclaimed variety and comedy show was one of the highest-rated in television history, garnering 12 Emmy nominations and a Golden Globe award for Martin ("Best Actor in a Comedy Television Series," 1967). The show was frequented by hundreds of guests from across the world of entertainment including legendary actors and actresses from the stage and screen, pop and jazz singers, dancers and comedians.

Hosted by legendary entertainer Martin, the unique variety and comedy show was a television pioneer. There were no rehearsals, no re-takes, and Martin simply just wasn't a host behind a desk and a microphone - he took part in virtually all the segments. Whether talking and singing with guests or performing a comedy sketch, Martin put every guest at ease and was able to coax even the most serious actors (such as Orson Welles and Jimmy Stewart) to indulge in their comedic and musical sides. Guests had a great time, word got out, and after the initial success of the show everyone wanted in on the act.

A famed star of the silver screen, television icon, Grammy Award-winning singing sensation and member of the renowned "Rat Pack," Martin's show business legacy is legendary. His musical career features such classics as "Ain't That A Kick In The Head," "That's Amore," "Mambo Italiano," "Everybody Loves Somebody," "Sway," "Volare," and more. He released dozens of album recordings over his lifetime, and starred in dozens of well-known movies, including "Ocean's Eleven," "Rio Bravo," "The Caddy," and "Who Was That Lady?" (for which Martin received a Golden Globe nomination for Best Actor).