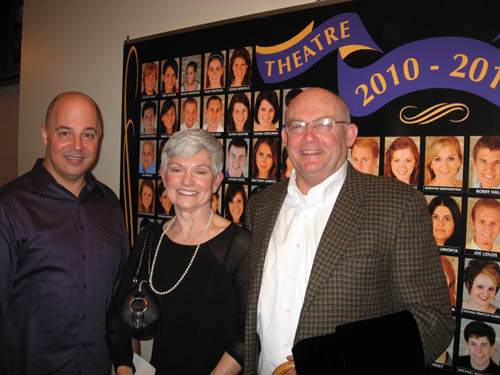 The musical will be followed by a cocktail reception, dinner and silent and live auction at the Niagara Falls Country Club in Lewiston. Auction items include gift certificates to area stores, restaurants and businesses; paintings; entertainment and sports-related memorabilia, gift baskets and much more.

Candy and Tom Lytle of Youngstown are this year's gala co-chairs. Longtime supporters of the Castellani Art Museum at Niagara University, the Lytles wanted to find a way to help NU Theatre and were "delighted" when this leadership opportunity materialized. Their daughter, Amanda Lytle Sharpe, is an adjunct speech professor in NU's department of theater and fine arts. She is also the director of "Pirates of Penzance."

Auction committee co-chairs include Friends of Niagara University Theatre board members Maria Arena of Clarence, Pamela LeCuyer of Getzville, and Adair M. Saviola of Buffalo. Arena is board secretary and Saviola is board president. Dinner committee chair is FNUT board vice president Russell Papia of Williamsville.

Funds raised from the annual gala will benefit the theater program and its students (from needed theater equipment and supplies to workshops and mentoring by guest artists).

Tickets for the gala are $150 per person. For more information about the gala, contact Peg Lacki, office coordinator and box office manager, at 286-8483.