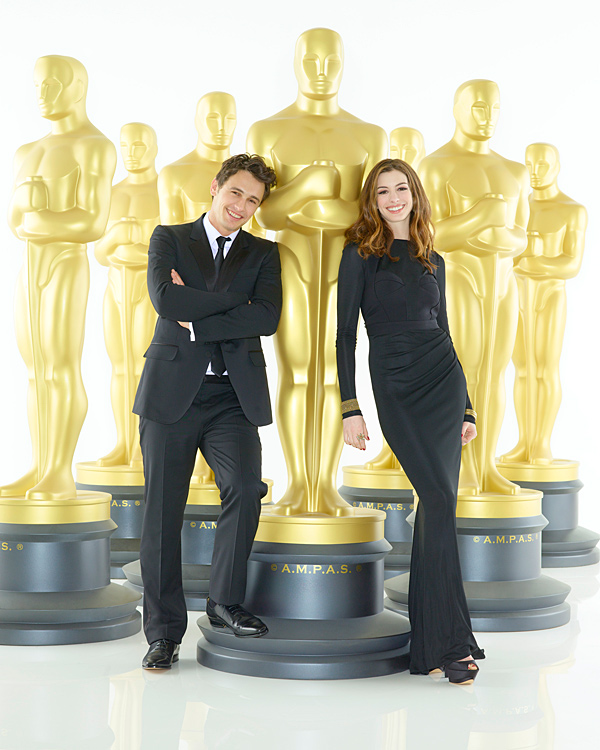 James Franco (left) and Anne Hathaway (right) will serve as co-hosts of the 83rd Academy Awards, Oscars telecast. Academy Awards for outstanding film achievements of 2010 will be presented on Sunday, Feb. 27, 2011, at the Kodak Theatre at Hollywood & Highland Center, and televised live as "The 83rd Annual Academy Awards" on the ABC Television Network. (photo © 2011 American Broadcasting Companies, Inc. All rights reserved.)

Sherak and Mo'Nique, who won an Academy Award for her supporting performance in "Precious: Based on the Novel 'Push' by Sapphire," announced the nominees in 10 of the 24 Award categories at a 5:38 a.m., PT live news conference attended by more than 400 international media representatives. Lists of nominations in all categories were then distributed to the media in attendance and online via the official Academy Awards website, www.oscar.com.

Academy members from each of the branches vote to determine the nominees in their respective categories -- actors nominate actors, film editors nominate film editors, etc. In the Animated Feature Film and Foreign Language Film categories, nominations are selected by vote of multi-branch screening committees. All voting members are eligible to select the Best Picture nominees. Nominations ballots were mailed to the 5,755 voting members in late December and were returned directly to PricewaterhouseCoopers, the international accounting firm, for tabulation.

Official screenings of all motion pictures with one or more nominations will begin for members this weekend at the Academy's Samuel Goldwyn Theater. Screenings also will be held at the Academy's Linwood Dunn Theater in Hollywood and in London, New York and the San Francisco Bay area. All active and life members of the Academy are eligible to select the winners in all categories, although in five of them -- Animated Short Film, Live Action Short Film, Documentary Feature, Documentary Short Subject and Foreign Language Film -- members can vote only if they have seen all of the nominated films in those categories.

Academy Awards for outstanding film achievements of 2010 will be presented on Sunday, Feb. 27, at the Kodak Theatre at Hollywood & Highland Center, and televised live by the ABC Television Network beginning at 8 p.m., ET. The Oscar presentation also will be televised live in more than 200 countries worldwide.

The following is a list of nominations for the 83rd Academy Awards, by nomination category and by picture.

Performance by an actor in a leading role

Performance by an actor in a supporting role

Performance by an actress in a leading role

Performance by an actress in a supporting role

Best motion picture of the year

The Academy of Motion Picture Arts and Sciences is the world's preeminent movie-related organization, with a membership of more than 6,000 of the most accomplished men and women working in cinema. In addition to the annual Academy Awards -- in which the members vote to select the nominees and winners -- the Academy presents a diverse year-round slate of public programs, exhibitions and events; provides financial support to a wide range of other movie-related organizations and endeavors; acts as a neutral advocate in the advancement of motion picture technology; and, through its Margaret Herrick Library and Academy Film Archive, collects, preserves, restores and provides access to movies and items related to their history. Through these and other activities the Academy serves students, historians, the entertainment industry and people everywhere who love movies.