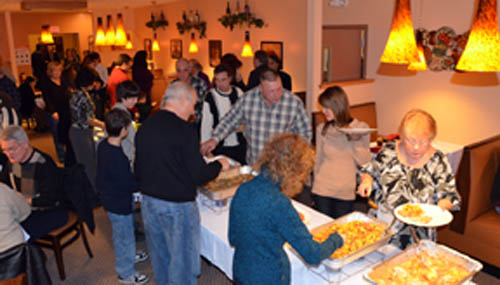 Leon's is back with pizza and more

"We watched thousands of families in Western New York grow up with us," said Pietro Passalacqua.

He and his brother Aurelio, part of an Italian family that immigrated here in the 1960s, were founders of the business.

Leon's was among the last businesses to close when the mall locked its doors (except for outside businesses) in June 2009.

Now, Pietro and Aurelio Passalacqua have brought the business back to Niagara County as Leon's Italian Bistro & Pizza at 8890 Porter Road, Town of Niagara, near the airport.

As always, influenced by the passion for food derived from their Italian roots, they've come back with even more to offer - not only pizzas of every description, calzones, subs and tacos, but a long list of pastas, steak, seafood, salads, special dinners and even a Friday fish fry.

"We're bringing in a lot of Italian recipes, a lot of pasta dishes unique in the area, not just sauce and meatballs," said Pietro's son Massimo.

The business has two sides, each with its own entrance. One is the more casual takeout side with seating for 40. Here's where you stop if you want to grab a couple of slices of pizza at the counter. The more formal restaurant side seats 82.

Leon's also offers delivery. Order a favorite meal on-line or check the menu by visiting the website at http://www.LeonsPizzaBistro.com or call 297-3366.

The business held its official opening on Jan. 3. Even before it opened, former mall customers were stopping by and asking when they'd be able to place a pizza order.

The family is a hard-working group, with everyone pitching in to help make the business a success, according to Bill Irr Jr. of Irr Supply in North Tonawanda. "They're really nice. The service they render is excellent. Their food is excellent," he said.

For Irr, the reopening of Leon's was serendipity. He owns the building, which previously saw service as a billiards place. Passalacqua's daughter, Rose, happened to be driving by on Porter Road and saw the "for rent" sign.

Irr is no stranger to Leon's pizza. His wife has been a fan for more than 20 years. When she was pregnant in 1995, they lived in Amherst, she'd make him drive up to the Summit Mall for pizza - "and that was twice a week," he said.