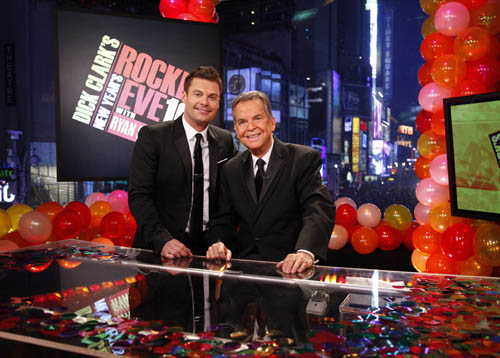 Ryan Seacrest plans to tip the holiday scales in his favor.

Who can blame him? He's got some pretty big shoes to fill on Friday night.

The "American Idol" moderator is the main host of "Dick Clark's New Year's Rockin' Eve" (10 p.m., ABC). With well-known "American Bandstand" host Clark taking a lesser role following a stroke he suffered in 2004, Seacrest has taken over the reins of television's most famous countdown.

"I was campaigning since I was 12 years old for Dick to look at tape of me," Seacrest said. "And I first met with Dick after the second season of 'American Idol,' and he gave me some great advice about being a host. At the time, (it) wasn't specific about New Year's Eve, but we sort of met up again and he allowed me to come in and help him out. And so each year I just try and improve myself and get the invitation to come back."

In Seacrest's favor this year is a hefty talent lineup featuring stars from music, TV and film.

"The fact that we bring in the biggest artists of the year every single year makes it really exciting," he said. "We've got the No. 1 artist of the year with Ke$ha performing live, and Taio Cruz is a breakout artist this year, as well as a reunion that'll be pretty spectacular with Backstreet Boys and New Kids On The Block together live, right before midnight with about 30 million people tuned in."

"It's kind of a way for me to look good regardless, since she's never been here and done it before," Seacrest joked. "I figured I'd stack the deck in my favor."

"Honestly, I felt like she doesn't think all the time before she says anything, which is fantastic," he said. "I love it because there's no filter. And knowing that this is a big sporting event after being there a couple of times, I figure she can handle anything that comes her way."

McCarthy, who said she's normally in bed two minutes into the new year, is looking forward to trying her hand at something a bit more adventurous this year.

"I jumped at the chance," she said. "I've never been to Times Square on New Year's Eve, and I haven't, you know, done correspondent work in a few years. So I thought, 'Why not get back in the game and show my stuff?' "

In terms of advice, McCarthy said Seacrest told her "To be myself, really. He knows (I) know from my past experiences with MTV and doing a lot of live television and hosting crazy spring breaks for five years and kind of anything goes. And he said, you know, do what you do best and have fun and get real with the people."

"You know, I think the only thing I haven't experienced before is the volume," McCarthy said. "Everyone had told me that, you know, it's really hard to hear each other. But in terms of interaction with people, it's one of my favorite things to do. I'd like, you know, to have fun with the crowd, but I have no idea what it's going to be like having them not hear me. So that's going to be a little bit of a fun challenge for me."

Seacrest said New Year's Eve in New York City is an experience unlike any other.

"I mean, we've said it before, but it really is the center of the universe on New Year's Eve. And the electricity at midnight and, frankly, for us to just shut up and be silent at midnight, and take in the atmosphere is pretty spectacular," he said. "It's something everybody should experience - if they can't do it in person, then certainly on television through this show."