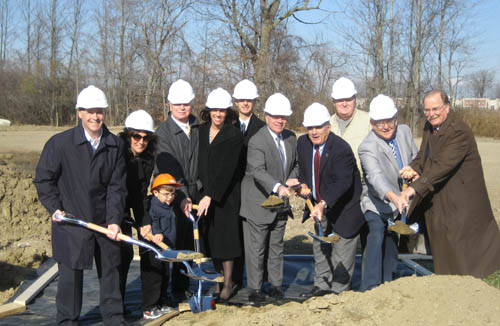 by jmaloni
Thu, Nov 18th 2010 03:00 pm
On Nov. 15, local developer Calamar and Apollo Healthcare celebrated the construction kick-off of the first building to be constructed in the new medical campus within The Woodlands Corporate Center East, off Shawnee Road in Wheatfield.

The full-service renal center currently under construction will be owned and operated by Apollo Healthcare, an integrated health care company dedicated to improving the lives of people who live with kidney disorders.

Apollo Healthcare provides dialysis treatment at locations in Western and Central New York, as well as Long Island. The construction of their new 8,000 square-foot facility in The Woodlands Medical Campus will result in a state-of-the-art renal care center to service this area and attract ancillary medical providers.

The Woodlands Corporate Center is one of Western New York's largest mixed-used developments and includes the largest commercial and industrial development in four decades in Niagara County.

"Drawing on the synergies of our current medical providers in The Woodlands Corporate Center West, the addition of Apollo Healthcare is a major step in the development of The Woodlands Medical Campus and will provide excellence in health care for Niagara County residents and beyond," said Calamar CEO Kenneth Franasiak. "Our goal is to attract and grow the medical field in our campus and to attract secondary users such as medical manufacturing, allowing for research and development opportunities."