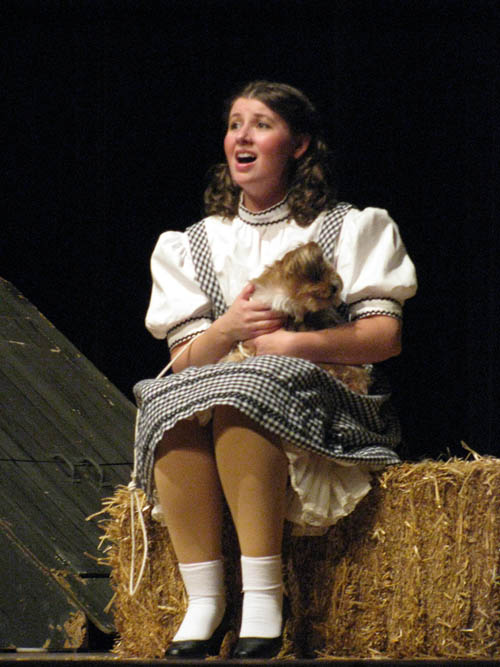 OK, I'll admit I wasn't enthusiastic about going to see the Theatre in the Mist's new production of "The Wizard of Oz."

I'd already seen the show twice in the past year alone, once in the ever-present Judy Garland movie format and once in a very nice high school production. But with a friend in a starring role, murmuring "there's no place like home," it didn't work, and I found myself on the Yellow Brick (Porter) Road last Friday, off to see the wizard at Niagara Falls High School. I should have realized that the change of venue from Theatre in the Mist's usual stagecraft at Stella Niagara's smaller stage in Lewiston meant big things were in store.

One of the biggest things is the huge cast of about 70 people, including more than 40 youngsters from various Niagara and Erie county schools. For their scenes, the absolutely adorable munchkins steal the stage with their enthusiasm, energy and a rainbow collection of costumes.

"This is probably my top dream role," she said after the show, explaining that the dream began when she appeared in "The Wizard of Oz" as a munchkin when she was a child.

She not only has to sing, dance and interact with other characters, but much of the time is carrying Coco, a yorkiepoo from Tonawanda, who plays Toto. Coco has a stand-in toy dog in a basket, so she gets many more opportunities to rest than Laxton, who is seldom off stage.

Jerry Mosey of Lewiston does triple duty, playing Professor Marvel, the Emerald City Oz guard and the Wizard himself. When the Wizard (still hiding his identity) speaks, that's Mosey's face projected hugely on the curtain, with strange eyes and red "flames" circling his brow. It's one of several special effects used during the show.

Opening night last Friday brought in the largest crowd (about 600 people) in Theatre in the Mist's history, according to Ryan Scarfone, director of marketing. The first show had a few minor glitches, which should be smoothed out by now, and a frantic moment that most audience members didn't know about, when Kelly Bancroft-Billings of Niagara Falls stepped in with only two hours notice to take the role of Aunt Em after the original actress fell ill.

This is a perfect show for children and grandchildren, especially those who have never experienced the magic of theater. As one little girl confided in me, "It's my favorite movie." I did overhear one quivery voice ask, "Are they done?" when the tornado, evidenced by swirling lights on the curtain, went through. Still, another little girl a few seats away sat rapt on the edge of her seat throughout the show, not even flinching as some of her fellows did when the Wicked Witch of the West shouted and waved her broom.

For those of us older folks who grew up watching the movie every year, it's a fun evening as well. Just resist singing along to those old classics "Ding Dong the Witch is Dead," "We're Off to See the Wizard" and "Somewhere Over the Rainbow." This cast can carry the tune.

In celebration of Theatre in the Mist's 10th anniversary, $1 from every ticket sold benefits the Make-A-Wish Foundation of WNY. Tickets are  $12, with seniors (62 and up) and students coming in at $10, and children 12 and under entering for $6.