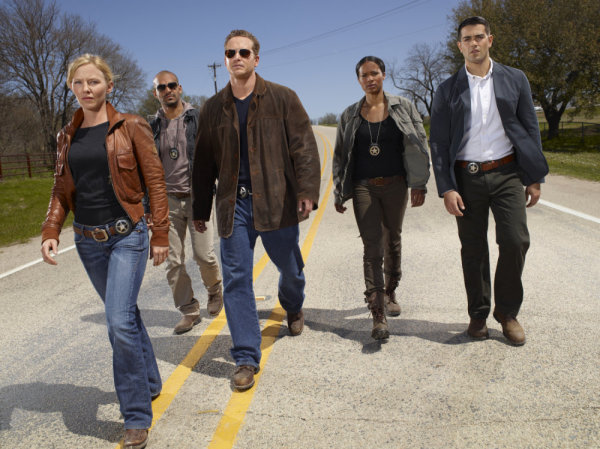 Knowing that TV critics like to compare new things to old things, it's sort of a surprise that "Chase" star Kelli Giddish hasn't heard "female Jack Bauer" used to describe her new role.

"You know, I hadn't heard that comparison," she says.

Unlike other tried and true heroes, however, she says her character's pursuit of justice is much more surprising.

"I think it's got the same -- she's got the same kick-butt attitude as some other characters we've seen that are great action stars, (but) the show takes place in Texas and she's a Texas girl, and she's also coming from a family that ... you know, I mean, she -- her father is a criminal, is an outstanding fugitive. So, she's a girl that ended up on the right side of the law, and to see how that happened and why she's so committed to her job, I think is going to be a really interesting journey," Giddish says.

"Chase" puts a different spin on the traditional cops and crooks skein. Stories are presented each week from two different perspectives: the vile offenders and the valiant marshals (which include Cole Hauser's Jimmy Godfrey, Amaury Nolasco's Marco Martinez and Jesse Metcalfe's Luke Watson)

While the show's chess match of good and evil resembles serialized dramas like "CSI" and "Law & Order," Giddish says "Chase" is more than just a group of detectives collecting evidence and plotting strategy. She likens her show to the classic '80s action thriller "Die Hard."

"Keep in mind," Hauser says, "that everything that you see, up until this point, for the most part, is us. And whether it's me driving a car or jumping out of a six-story window, or Kelli hanging out the side of an airplane as it's about to take off or jumping off a bridge, I mean, these are all things that you don't see on television -- the actors doing.

"So I think what makes this show special is not only the mental side of it and finding the criminal and getting into the criminal's mind, but also the fact that you're seeing two actors kind of in their prime who are athletes doing a lot of amazing stunt work."

Ultimately, then, "Chase" is a good, old-fashioned ... well, you know.

"This is about that visceral feeling of chasing somebody and/or being chased," show creator and exec producer Jennifer Johnson says. "It's getting back to basics. It's getting back to the heroes chasing the criminals. Good guys versus bad guys. Everything is so complicated these days. This is the return of the American hero."