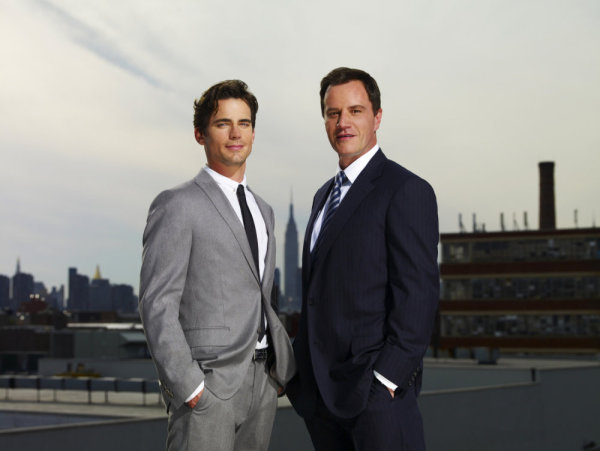 Fortunately, this fork in the road promises to be explained -- and, at least in part, fixed -- in short order. For, if there is one thing series creator Jeff Eastin proved in season one, it's that he's not one for long, drawn-out storylines.

Then, after setting up a premise wherein master thief Neal Caffrey (Matt Bomer) escaped from prison, was caught by Burke, and worked with the bureau in an attempt to reconnect with his long lost love, Kate (Alexandra Daddario), Eastin decided fans would have to set their sights on something else. In blowing her up in a plane crash, Eastin effectively put the kibosh on a down-the-road, final episode, Neal-Kate rendezvous.

"I love that Jeff Eastin answers the question he asked in the first episode, and I agree with you," Bomer said of Eastin's unusual, rapid reveals. "There were big payoffs and I think Tim and I were both were looking at each other going, ‘Where are we going to go from here?' "

That initial question, of course, is whether Neal can become a law-abiding citizen and stay out of jail. That's yet to be decided.

In any case, Bomer said "White Collar" fans shouldn't fret at the supposed lack of suspense. He said Eastin has plenty of edge-of-your-seat storylines lined up this season.

"We did (go from here), and now we're at the midseason finale this season going, ‘Oh my God! Where are we going to go from here?' So, fortunately we have a great writer in Jeff Eastin who likes to answer the questions he presents pretty concisely and pretty briefly. So, I'm just happy to be along for the ride," he said.

Eastin, no doubt, is equally pleased to have Bomer starring in his series. After a successful guest-starring stint on NBC's "Chuck," Bomer's wit and charm have made him a bonafide leading man on pay cable -- and a popular magazine pinup.

"Well, I don't perceive myself that way in any light," he said. "Thankfully, I'm so busy with work that I don't have time to process too much of that stuff. But it's great that people are responding to the show and Jeff's writing, most importantly, and know we're hopefully getting the word about our show out there because we work really hard on it. And I speak for myself and Tim and the cast and Jeff when I say that we're really proud of the stuff we're working hard to put out there, and thankfully, or hopefully, the word is getting out."

Original episodes of "White Collar" air Tuesdays at 9 p.m. on the USA Network.