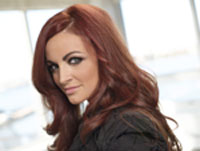 'The Celebrity Apprentice' - No crap! Maria Kanellis is fired

Despite her rather stellar showing on tasks in "The Celebrity Apprentice," Donald Trump fired former WWE Diva Maria Kanellis after she made a comment about contestant Curtis Stone and his, ahem, bowel movements.

Both Trump and Stone considered the remark something of a low blow.

Kanellis was surprised an off-the-cuff comment led to her dismissal.

"So, some of the comments I've heard in the past in the boardroom had been 100 times worse than what I said. And so, I was a bit surprised. It was supposed to be a joke, but it didn't turn out that way. People have different senses of humor. And so, I was very upset. I was crying. I was just - I was mad, you know a whole slew of emotions."

Though famous for portraying a character, a wrestling star, Kanellis said her intention in joining "The Celebrity Apprentice" cast was not so much about revealing the real Maria as it was raising money and awareness for her charity of choice.

"Well, the first thing was just doing stuff for charity. I've always like Make-A-Wish Foundation, so to be able to work for them was great. And I did make a bit of money for them, not as much as I would have like, but I did make a bit of money for them," she said. "But, it was also nice to start showing that side of me that, you know, is me and is the real me. And I'm quirky and weird at times, but you know - and also I grew up where it was a very hard working family. So, doing the manual labor was so much easier than some of the other stuff, so I was happy for that."

Kanellis is now pursuing a career in music. She hopes her time on the NBC reality series will help spread the news of her musical prowess. She may also return to television in the near future.

"Yeah. I'm working on getting my show picked up right now," Kanellis said. "I'm starting a rock band and so I want to show that to the world and the trials and tribulations of finding a band, and finding a band that works together, so there's that.

"I also have my CD that just came out on iTunes in April, so it's a four-song EP, it's rock music, (unintelligible) lyrics, all kinds of fun, and I'm the lead singer on it. So - it's called ‘Seven Sins' and it's my baby, so I plan on going out on tour with that end of the summer, beginning of the fall. So I'm going to be doing that as well, alongside some new music as well.

"But yeah, I definitely want to do more on-camera stuff and auditioning all the time for movies and things such as that, too."