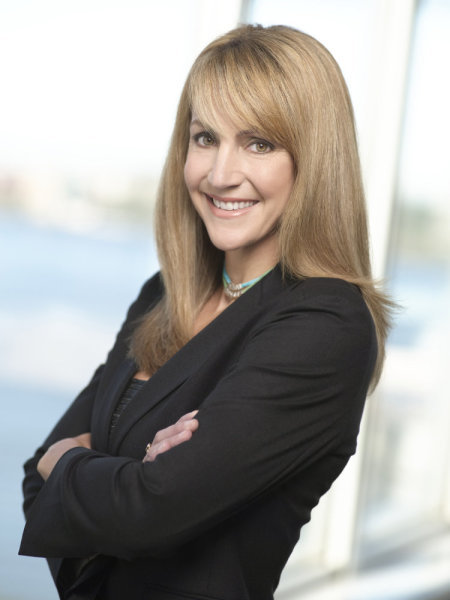 Summer Sanders, a star of "The Celebrity Apprentice" on NBC. (photo by Mitch Haaseth/NBC)

Sure, Summer Sanders wanted to win "The Celebrity Apprentice" and raise money for her charity, Right To Play. But, she wasn't going to resort to undercutting her competitors to get the job done. Though NBC's reality television series has a history of bickering, backbiting and bullying, Sanders says that's just not her style.

"Yeah, you know, it's funny. I'll put it in a very simple form; I'm a lover not a fighter. I just don't do well in those fighting situations," she said in a phone interview.

Sanders was fired by Donald Trump after her team, Tenacity, lost its challenge (generating commercials for Clockwork Home Services). The Olympic gold medal swimmer and television host/correspondent says she could've been a better project manager.

"Honestly, you know, I really did take control of this task," Sanders said. "I wanted to be a better project manager than I was the first time around.

"And I felt like I was, which is actually ironic that we lost the challenge and the first time around I won. But I also wanted to take responsibility. And I think when I was sitting there representing my charity, which is Right to Play, and one of the main things we at Right to Play try to teach these kids in underdeveloped countries and children who've been affected by war - we try to teach these kids to be positive members of the community. And one of those things is great leadership and accountability and responsibility. And I felt like I would be doing my charity a disservice by not representing that well. And although I didn't say that in the boardroom, and hindsight's 20/20, I wish I had."

Sanders didn't throw teammate Curtis Stone under the bus as she easily could've done. In the episode, Stone, a celebrity chef, was seemingly the weakest player on Tenacity. When Trump asked Sanders to fight to remain on the show (i.e. rip Stone), she more or less declined.

"I know ‘Celebrity Apprentice' is not known for, you know, quote unquote teaching lessons to people but I do think that that's a very strong and important quality for a leader is taking responsibility and then moving on from that. The only problem was I couldn't fight for myself. I'm just not a good fighter."

Though Sanders lost the task - and the opportunity to compete in the finals for $250,000 - her charity did walk away with $40,000. Sanders, herself, also impressed Trump (and this writer) with her intelligence, dedication and ability to perform well under pressure. Currently, the dedicated family woman is pondering her next career move.

"My No. 1 priority is being a mom and a wife and sort of running my own little Fortune 500 Company, which I call my household," she said. "But I did - this show was really fun for me. When I got done filming it I said it was one of my greatest challenges so far to date. And I still feel that way even after all the editing and stuff.

"So it has lit a fire under me to sort of get back out there and get into my career. So I'm looking at a few opportunities. I still work with Rachel Ray and do features for her. But I would love to get - like back out there hosting a show and there's been some renewed interest, which is really fun for me."