The final week of blind auditions on "The Voice" proved NBC's singing competition is no respecter of persons. The four coaches, for example, were as impressed with a singer who had only performed in small coffeehouses as they were with someone who had performed in Nashville for many years. The show proved, once again, that the quality of each contestant's voice is what really matters.

These performers were among the week three standouts: 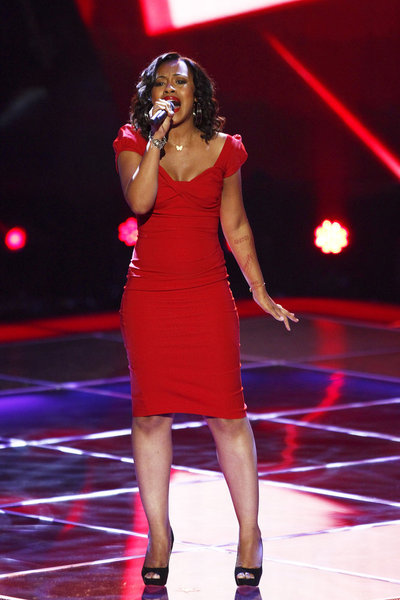 Sasha Allen's vignette started with her saying she's a mother and fiancé. Little did the television audience realize, as it watched images of her family at a playground, that she wasn't just another struggling artist.

As her backstory continued, Sasha, 30, revealed she is a classically trained pianist (!). A singer who began performing in nightclubs at a young age (!!). And a backup vocalist for Alicia Keys, John Legend and sometimes "Voice" coach Christina Aguilera (!!!).

When Sasha took the stage for her blind audition - and performed a country song, of all things - the coaches quickly realized she would be a frontrunner for their show's fourth season.

"You are magic, and you have (an) unbelievable, natural, God-given gift," Adam Levine said.

"I, obviously, understand why you picked that song, because you wanted to make a lasting impression on all of us. And you did," Usher said.

"You have a beautiful voice," Shakira noted.

"We all want you real bad," Adam added.

In a phone interview Tuesday, Sasha said she hopes to equal the success of previous contestants Jermaine Paul and Amanda Brown - two vocalists who were backup singers prior to their time on "The Voice."

"You know, I actually know both of them very well; they're very good friends of mine," she said. "I think watching Amanda was really encouraging. I found that people are really appreciating what she has to offer and that hopefully they'll appreciate what I have to offer as well. So absolutely, they both did (inspire me to audition). And different friends in the industry really pushed and said that this is the way it's going. You know, do a live show where people can really see what you've got." 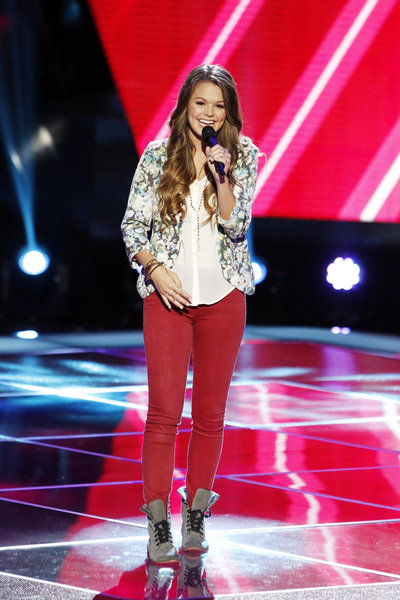 Caroline Glaser joined this season's large contingent of singers who have little stage experience after her performance of Elton John's "Tiny Dancer."

Like her peers, Caroline's audiences, prior to her blind audition on "The Voice," had been limited.

"This is the biggest thing that's ever happened in music for me," Caroline explained in her video. "On a good night, about 30 people showed up to the coffeehouse. So this is nuts that I'm playing for millions of people.

"I know I'm kind of over my head out here, but I'm hoping the coaches will hear a unique sound and be intrigued."

"I love the fact that you didn't do anything over the top," Blake said. "You came out here and just did a very simple performance and completely blew my mind with it."

"You did an amazing job," Adam said. "And that's one of my favorite songs - so I hold that to a higher standard - and you totally made it your own thing."

"You are the kind of voice that I have been waiting for, to hear on this show," Shakira said.

Blake appealed to Caroline's passion for songwriting, and the singer selected him to be her coach.

Following her performance, Caroline was still trying to grasp all that's happened to her in the short time since she joined "The Voice." 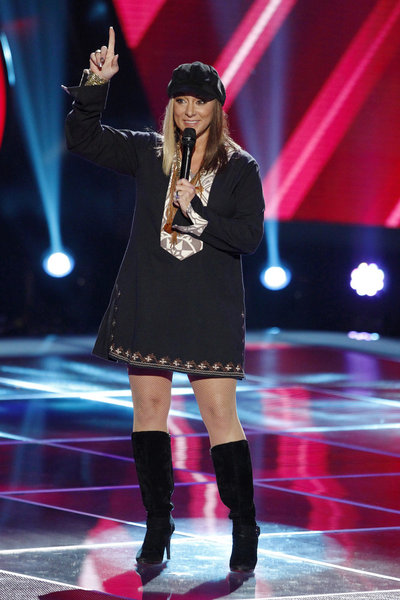 Shawna P. seemed to be in the right place, performing alongside "MuzikMafia" mainstays Big & Rich and Gretchen Wilson in Nashville. But it wasn't the right time. When those singers were "called up" to the big leagues, so to speak, Shawna P. was left behind.

"There were a couple of things," she said in a phone interview Tuesday. "MuzikMafia was a fantastic platform for me. With the Mafia - as in the mafia we all know, the Italian mafia - there was a hierarchy. And I was in line in the hierarchy to be promoted and presented as a solo artist. ... You were groomed and came up through the ranks and sort of paid our dues. And I was set to come up through the ranks and, unfortunately, the MuzikMafia dissolved before I got the opportunity to shine as a solo artist.

"And also at the same time my mom became terminally ill. So I, without question, just decided to move home and be with my mom, so that changed everything."

During Shawna P.'s blind audition Monday, television audiences discovered the 45-year-old singer is just as talented as her more famous former colleagues. Her rendition of The Black Crowes' "She Talks to Angels" earned chair turns from Adam and Shakira.

"I was so seduced by the performance, by your voice," Shakira said, suggesting Shawna P.'s rock 'n' roll, raspy voice is unlike any other currently on American radio.

Adam compared the singer to Janis Joplin, and said, "There was a raw quality. I couldn't ignore it."

Shawna P. said she had to "go with her gut," and opted to join "Team Shakira."

"I'm going to make sure that she goes a long way," Shakira said.

"This is the opportunity I've waited for my entire life," Shawna P. said prior to her performance. "A lot of people, at my age, would've given up on their dream by now. And really the only thing I want to do is share my gift with the world." 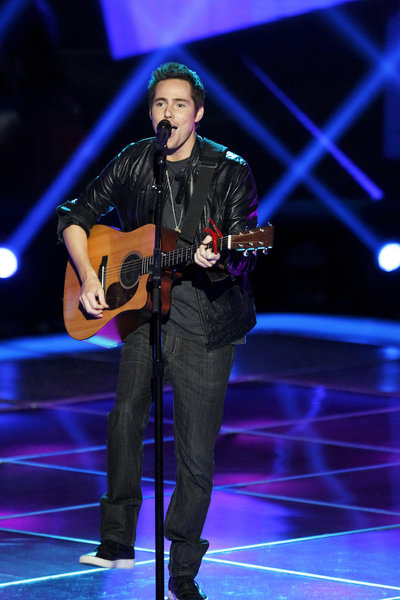 Jeff Lewis possesses a strong skill set. Interscope Records saw that, and signed him to a contract. He hit the road for a small radio tour, completed some music videos and was set to release his debut album.

But after almost three years of work, Jeff said he was put on the shelf, and his work wasn't released.

Interestingly, he didn't come to "The Voice" looking for a second chance. But when he met the other singers, he realized this was the right fit for him as he moves forward as a solo artist.

"Yes, I've got to be real, man: I had actually never seen an episode of 'The Voice' before I actually auditioned," Jeff, 28, said in a phone interview. "When I got booked for the show, I actually thought I was doing backgrounds (vocals) for season three. And then I showed up and I found out it was not that, it was actually to be a contestant on the show, and I had to re-think exactly what it was. But, you know, hanging out with all of the contestants and seeing the talent level that there was here, you know, you don't how talented everyone is until you get here.

"And we're sitting around campfires and playing guitar and singing and I was just, like, 'Man, these are some serious, serious singers. This is not just a TV show made for TV. These are real artists.' And, you know, there's a lot of some similar stories. A lot of the people here even now have been signed to major and minor labels and have almost finished records. ...

"And so, I got here, and I saw the talent level, and I had such a good time, and the production crew and everyone on this show is just amazing. And I started watching just a little bit of season three and saw how they really don't paint people in negative lights. They really are here to help artists to kind of reach their dreams. So it was a pretty easy decision once I was here for a few days and saw, you know, the talent level and got to know some of the production staff. And that was kind of what made me stay and made me, you know, continue on this journey and really go after it."

For his blind audition, Jeff performed Usher's "U Got It Bad." Blake, Shakira and Usher each made a case for him. Jeff picked Usher, who told the singer, "I'd like to change your life."

"I am excited to have Jeff Lewis, because he's willing and ready to work," Usher said after the performance. "

"The Voice" airs Monday and Tuesday at 8 p.m. on NBC. Find the show online at http://www.nbc.com/thevoice. All singer photos by Trae Patton/NBC.