Brief rain showers could not deter the Lewiston Peach Festival crowd from enjoying the ongoing events this past weekend. With stage performances by Lew-Port and Wilson cheerleaders as well as the McCarthy School of Irish Dance, there was plenty of entertainment for all. Forty members of the Albany Marine Band from Albany, Ga., marched in the parade along with the Grand Island Ilettes. Kaylee Gong, 7, and her 4-year-old sister, Aubrey from Lockport, chose to have some fun on the bumblebee ride. Peach Queen winner, Chelsea Pelsone, was all smiles as she posed alongside her court. Peach Fuzz, 5-year-old Zackary Kayser of Niagara Falls, and Peach Blossom, 7-year-old Isabel Konopka of Niagara Falls, wave to the crowd as they accept their titles.

Last weekend's Lewiston Kiwanis Peach Festival was also one of visits from some notables.

U.S. Marine Corps Sgt. Maj. Michael P. Barrett, who served as honorary grand marshal for the 2011 Peach Festival Parade, joins with Michael Dowd, town attorney for Lewiston and Porter, and his wife, Melissa, at a reception hosted by the Dowds. (photos by Michael Dowd and Terry Duffy) 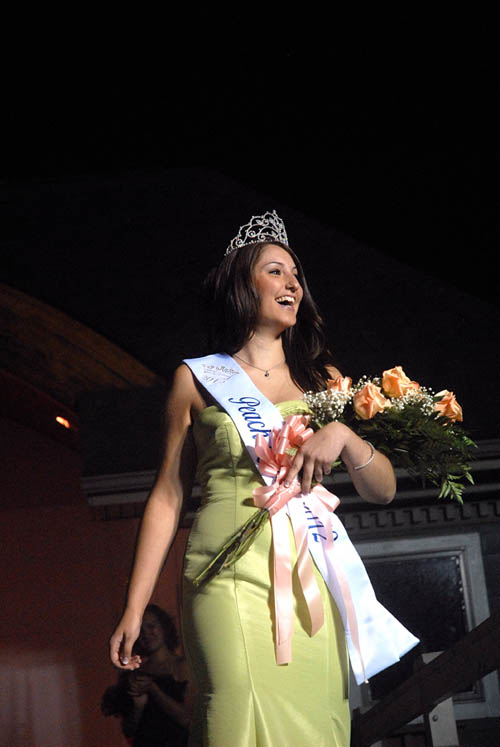 Lewiston-Porter graduate Chelsea Pelsone of Youngstown is all smiles as she greets the crowd in the Academy Park grandstand after being named 2012 Peach Queen at the 54th annual Lewiston Kiwanis Peach Festival last Sunday. See inside today's Sentinel for a pictorial recap of the memorable festival. (photo by Robin Clark).