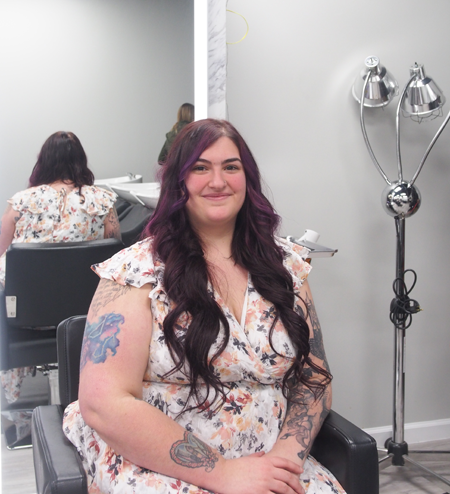 Sarah Santella said that, as a hairdresser and salon owner, she likes "to help people embrace or enhance their image."

On Jan. 6, Simply Amazed Salon celebrated its grand-opening with a party.

The salon has been open since Nov. 1, 2022. This is the second salon called Simply Amazed Salon that Santella has owned on Grand Island. The first one was opened Nov. 1, 2017, on Whitehaven Road. That salon closed when Santella moved her business to the new location.

“I love doing fashion colors, all the fun blues and purples,” Santella said. “I specialize in extensions, as well. I do tape in extensions, bead in extensions, and the hand-tied extensions. You can use extensions for length or thickness. You can add it for color. If you don’t want to color your hair purple, but you want to try it, you can put those in. You can enhance, you can add, you can do pretty much anything with them. It’s pretty cool.

“Most of my clients are normal, everyday people who get their gray covered. I mostly do cuts and colors. People come in every four to six weeks for root retouches and haircuts. My other big one is the fashion colors. I would say that the No. 1 thing that I do is women’s root retouches to cover their gray.” 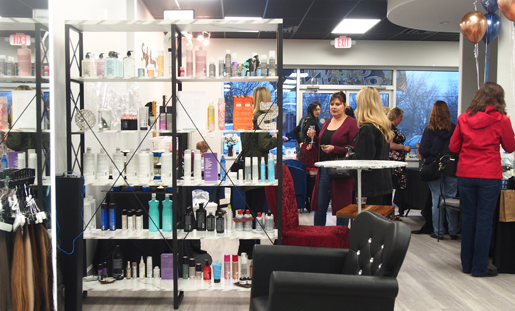 Visitors explore the salon during the grand-opening party.

Santella said owning a salon has been a dream of hers.

“I bought the previous salon that I worked for from the previous owner. Since I was in hair school, I’ve wanted to own a salon,” she said. “It was perfect timing and a great setup, so it was definitely the best decision at the time. I went to hair school at Niagara-Orleans BOCES. I started in my junior year of high school. I was able to graduate with all my hours that I needed to take the board exam.”

Currently, Santella has one employee in her business, as well as three stylists who rent chairs.

The employee, Santella said, is a recent graduate from hair school: “She pretty much helps me with the laundry and answering the phones, but she does hair, as well. Sometimes, if I double-book a client, she’ll wash them out for me. She does the shampoos and blow dries and stuff like that. We work hand in hand. Sometimes, I couldn’t do it without her.”

There are positives and negatives to owning a hair salon, Santella said.

“The ups would be that it’s something that I walk into every day, and I know that I’ve worked hard for this, and I get to be a role model for new people coming into the business and even people who are already doing hair,” she said. “I get to teach and share what I’ve learned over the years with them. Another up would be that I basically get to make my own schedule. It’s really nice to be able to take that time off if I need to or move stuff around and work around my personal life, as well. It’s a little easier to maintain a work-life balance.

Santella’s hopes for the future include the growth of her business.

“I have chairs left to rent out, and I have room to grow so I can add five more stations,” she said. “I would love to get more stylists in here in the future. Both renters and stylists who work for me. Eventually, down the road, if everything goes very well, I’d like to open a second location and spread out and go off the Island. Expand a little bit.”