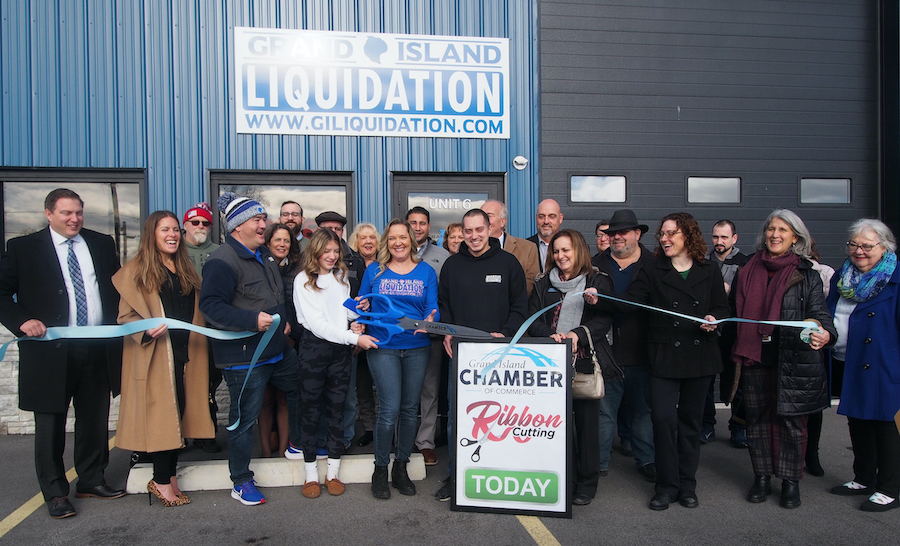 Nicole Cannarozzo and her family and friends, along with elected officials and members of the Grand Island Chamber of Commerce, celebrate the ribbon cutting.

Nicole Cannarozzo discovered liquidation stores on social media: “I saw on Facebook, during COVID, someone in Texas said she bought something from her local Amazon return store.”

After seeing that post, Cannarozzo asked herself, “What? Why don’t we have one of those?”

In January 2022, Cannarozzo began taking steps toward opening a business with her partner, Mike Sobieski. One of those steps was finding an attorney to help her with the process.

“I searched for an attorney on the Island, and it just came up that Andrea Tarshus was a good one to use for starting a small business,” Cannarozzo said. “She made it a seamless process. It was perfect.  So then, later in the week. I found this (site), and we bought our first pallets. That was it. Here we are.”

President Eric Fiebelkorn said the Chamber works to support small business by getting them connected in the community: “We don’t have any other magic sauce than handshakes, hugs, and word of mouth around town. In the Town of Grand Island, that’s really what it’s about, more than anything.”

“Thank you so much for the opportunity,” Cannarozzo told the Chamber. “That’s the gist of it. Everybody was so great and welcoming. I’m so glad that we’re a part of the Chamber.”

Grand Island Liquidation is a wholesale store that is open to the public.

“We purchased truckloads of overstock, damaged boxes, and some customer returns. Because we buy truckloads of it, we can resell it at extremely low prices,” Cannarozzo said. “We have something for everyone. Don’t buy anything at full price until you’ve checked with us, first. We have everything listed on the website.  We try to keep it as updated as possible and go from there. It’s the holiday season and we’re hoping to get something for everyone.” 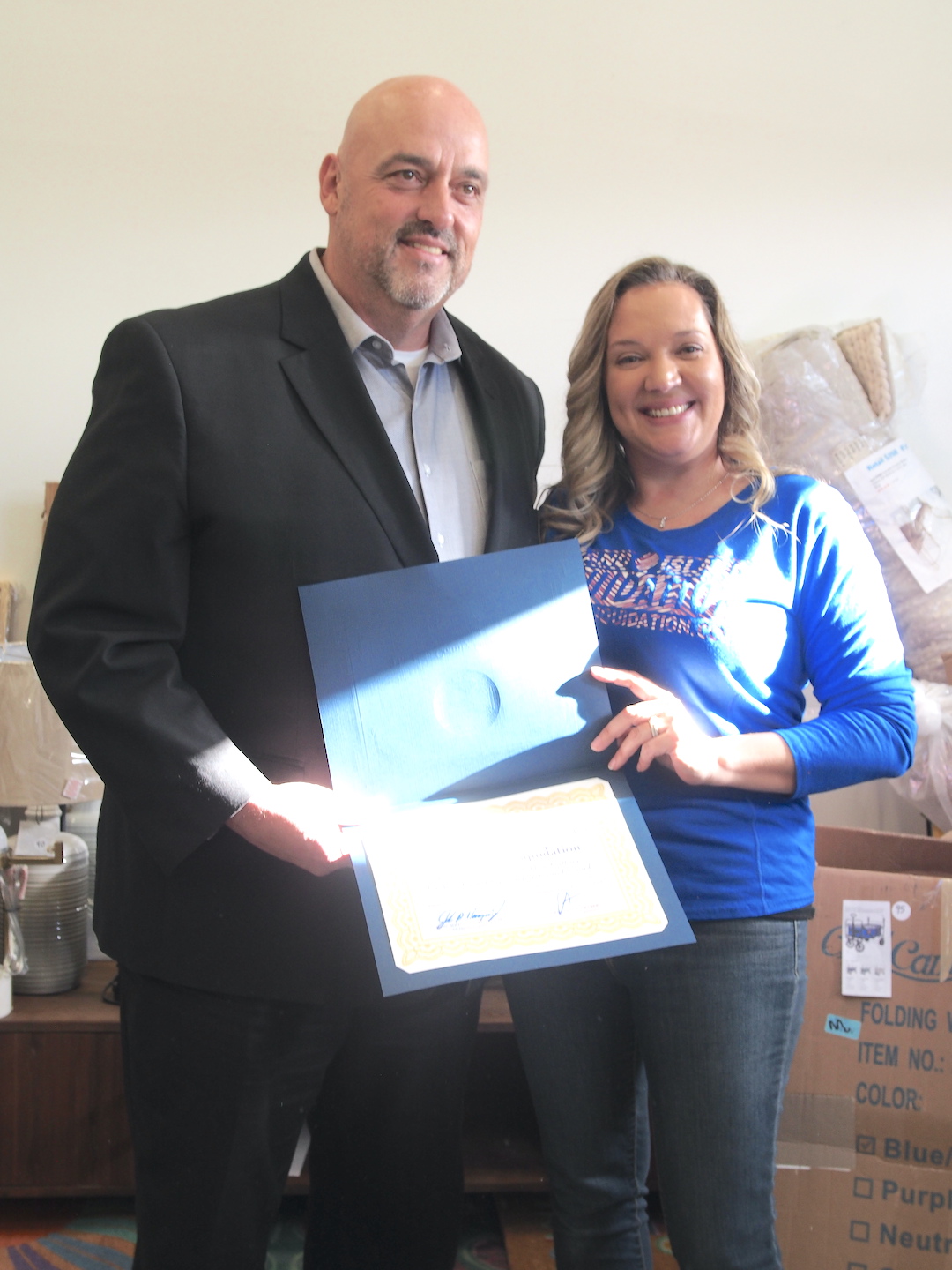 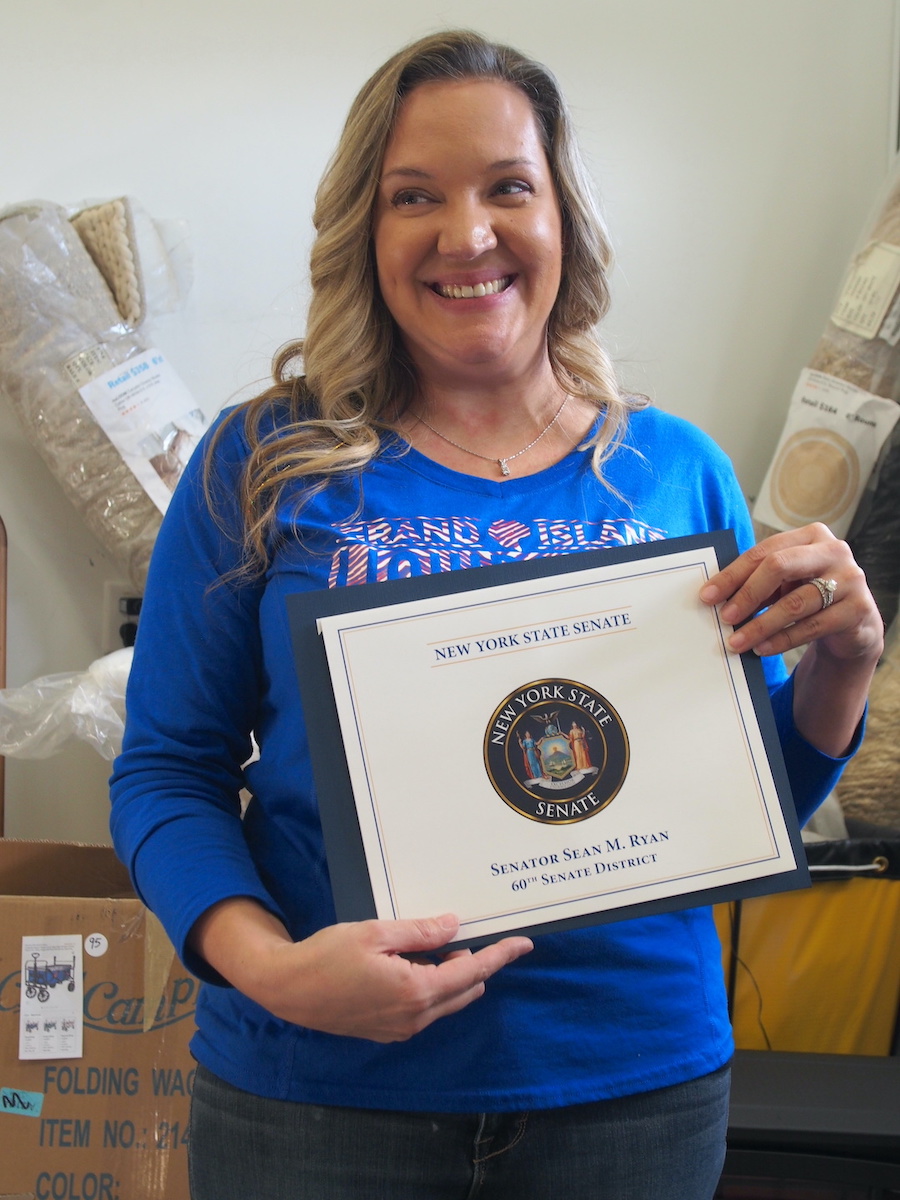 Erie County Legislator John A. Bargnesi, who presented Cannarozzo with a proclamation, said, “I’m a small business owner myself for 35 years, so I know the importance of the community and the Chamber and everything that’s involved in getting yourself off the ground and successful. So, on behalf of the county legislature, congratulations. And keep doing what you’re doing because there’s a lot of neat stuff in here.”

Getting the “neat stuff” can be an adventure, Cannarozzo said: “I’ve very excited to have the opportunity to bring this to the Island. It’s definitely scary. I have no idea what’s on these pallets. With opening the boxes, we’ve had times when they’ve been empty. We’ve also gotten brand-new, factory-sealed computers and an iPhone.

“We’re in a cardboard wonderland. There’s some organization, as you will see. We have little departments set up. Opening boxes after boxes. It’s a lot of fun.”

Cannarozzo said that getting public exposure has been very helpful for boosting her business.

“After our interview with the Chamber a couple of weeks ago (on Small Business Saturday), our followers on Facebook absolutely skyrocketed,” she said. “We’re having so many repeat customers. It’s a personalized shop. Taxes are included in my prices. It’s all that customer service. We want people to come to us.”

What makes Cannarozzo happiest about owning a business is “seeing how excited everyone is when they come in here. So many say, ‘I didn’t even know about this,’ ‘I’m so glad I found you.’ The relationships start. Everybody knows everybody on the Island. It’s great to be a part of it now when people say, ‘I heard about you from so and so.’ It’s just awesome.”

Cannarozzo, who also works as a secretary for Robin Kwiatek, director of technology, in the Grand Island High School information technology office, said owning a business is rewarding, but there are also risks involved.

“There is no guarantee with this,” she said. “You have to be prepared to take a loss. Already, I’ve learned some expensive lessons. I’m glad to get them out of the way early. I feel that I’ve become a much smarter businessperson, even in the short amount of time. I just love it. 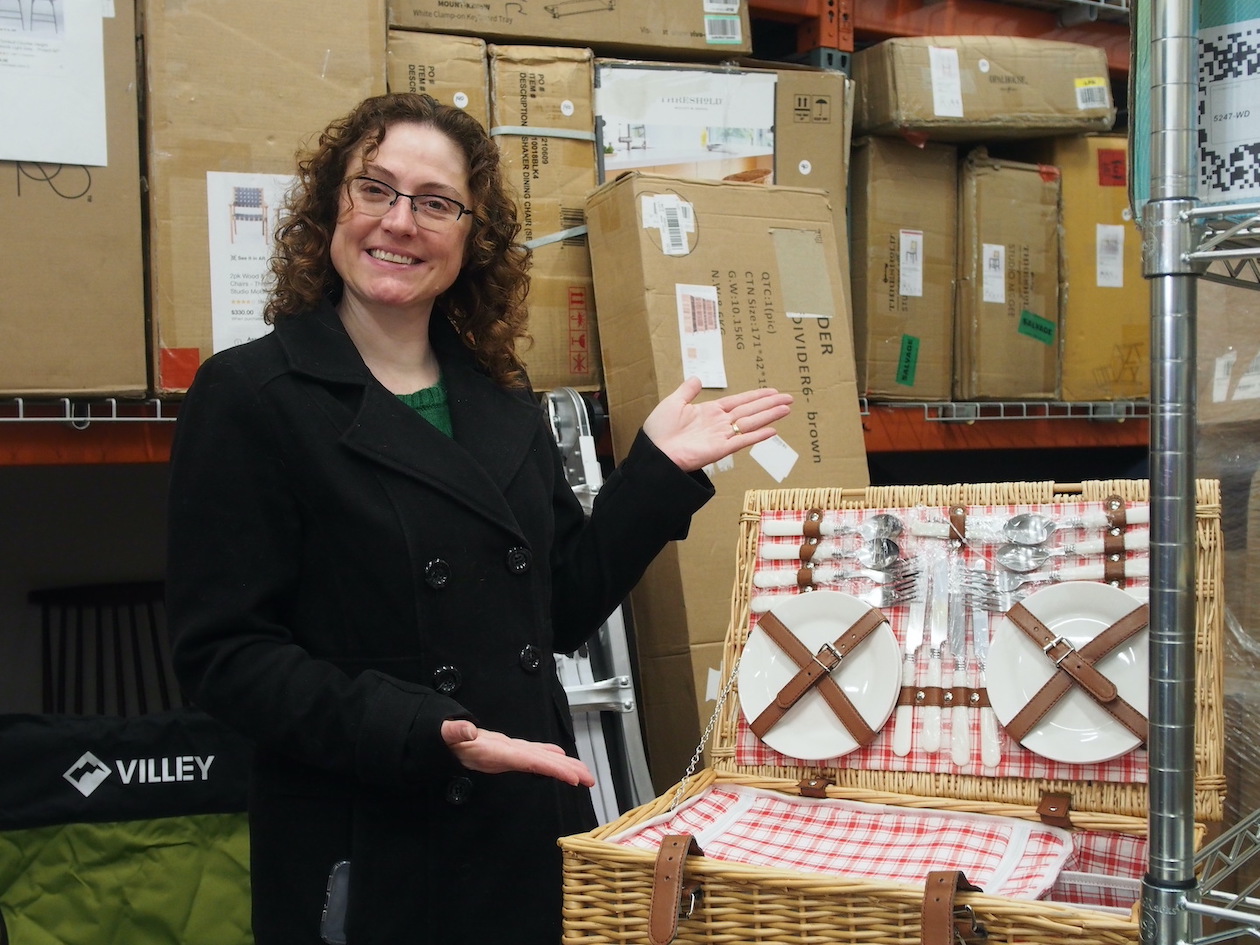 Vienna Laurendi, from the Grand Island Chamber of Commerce, shows off some of the goods available at Grand Island Liquidation.