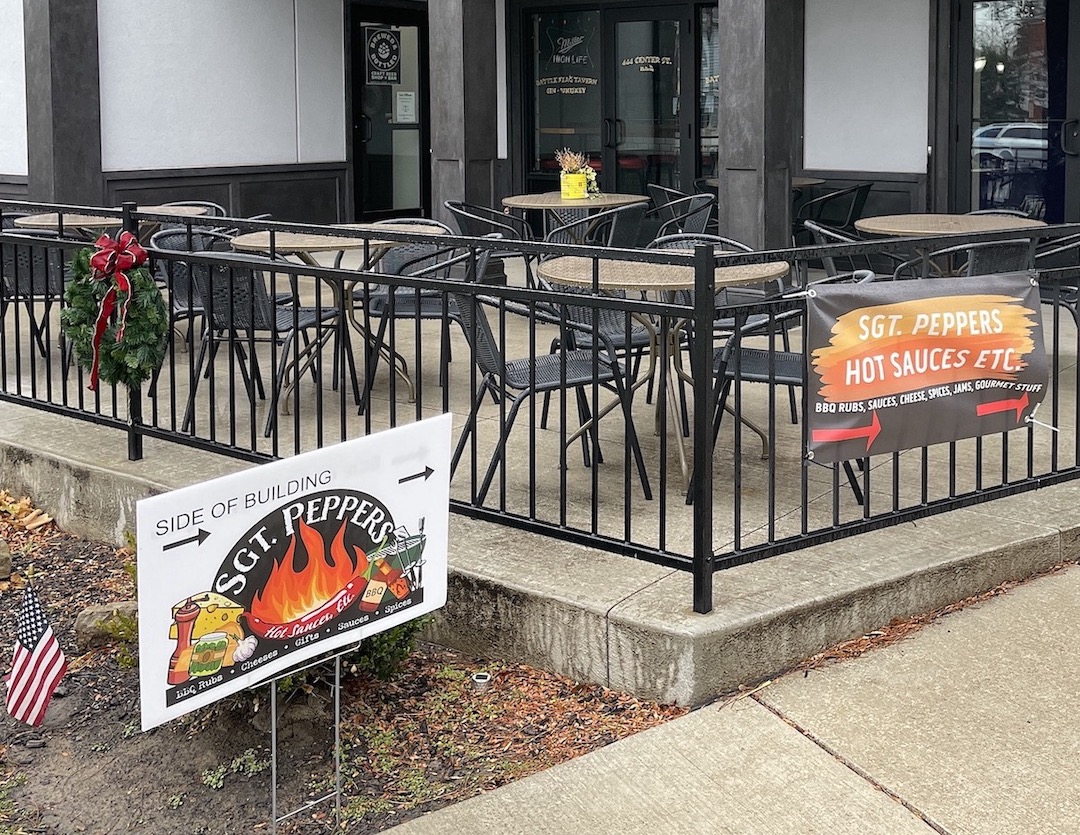 Tenants at 442-444 Center use extra signs to promote their businesses.

For several weeks, Village of Lewiston trustees have been debating what to do with “sandwich boards” promoting Lewiston businesses. They relaxed municipal laws pertaining to A-frame posts at the start of the coronavirus pandemic, and have continued to permit the markers – particularly noting the need to direct people to slightly off-Center Street retailers Sgt. Peppers Hot Sauces and Brewed & Bottled Craft Beer Shop.

Town of Lewiston Clerk Donna Garfinkel, who owns and operates the former with her husband, Neil – and whose son-in-law, Chris Budde, and daughter, Jessica, run the latter – asked trustees to continue considering small businesses.

“Since the 19th century, sandwich boards have been seen all around, as strangers and merchants use them to advertise their business,” she said. “Sandwich boards have a long and very effective history. Even today, sandwich boards offer an affordable means for businesses to advertise their products, services, special offers and, most importantly, the shop’s location. Our signs are our first customer service representative. They help the local small businesses to grow, and be here for our customers.”

Garfinkel added, “The village code can be amended to allow for the sandwich boards – with stipulations. Please think about it; discuss it; maybe meet with the different businesses that are using them? Why they use them; what they’re using them for; how they helped us immensely – not only during COVID, but now that things are starting to get a little bit back to normal. They’re helping us a great deal."

Sgt. Peppers and Brewed & Bottled are tenants at the new 442-444 Center St. complex. Though the Garfinkels and Buddes have said they love the space, they are concerned about being located, respectively, on the side and back of the building – which, Budde said, regularly causes confusion with customers looking for the entrances.

Welch also mentioned Queen B’s Cottage, which opened over the summer in the “Big Yellow House” on Ridge Street. The building formerly housed offices and doesn’t unavoidably look like a retail store.

Speaking of these three Lewiston retailers, Welch said, “People don’t necessarily know you’re back there. You need that visibility (from a sandwich board).”

She added, “There are situations like that, that we need to address. To say, ‘No; we’re just not going to do this,’ it doesn’t help you.”

The mayor explained, “Obviously, I was here a long time (30 years) as clerk. We allowed them way back, and then they got out of hand. People were complaining about walking down Center Street. ‘One was this big, one was this big.’ Nothing was uniform. They were placed all over the place. You kind of had to wind your way through it. So, (the Village Board) decided, ‘OK, no more sandwich boards.’

“Obviously, during COVID, we said, ‘Do whatever you have to do. Put your sandwich boards out. Your banners. Whatever. We’re here to help.’

“So, now it's come down to COVID is over, and it’s like, ‘OK, what do we do?’ Do we go back to our code that says no sandwich boards, or do we try to work with the businesses and decide if we can make them uniform – if we can have them placed so they’re not all willy-nilly all the way down the sidewalk?” 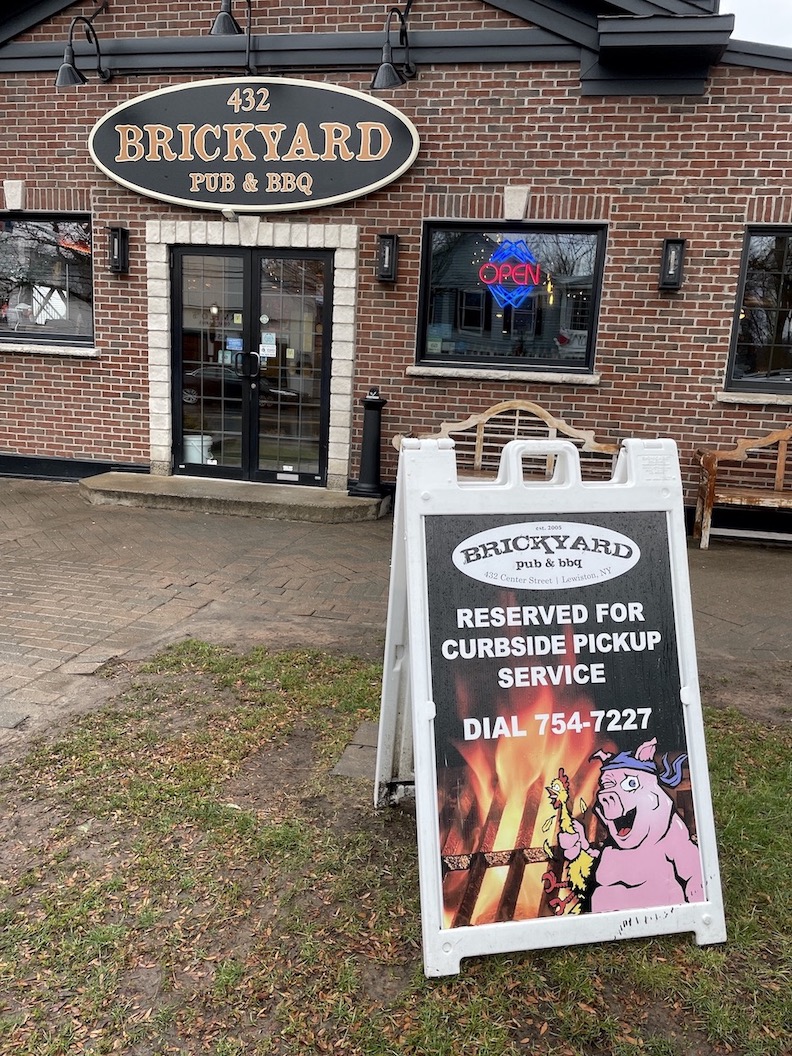 The Village of Lewiston Board of Trustees is looking for a way to create uniformity with "sandwich boards" – like the ones shown outside the Brickyard Pub & BBQ and Brickyard Brewing Company – while not cluttering up Center Street. 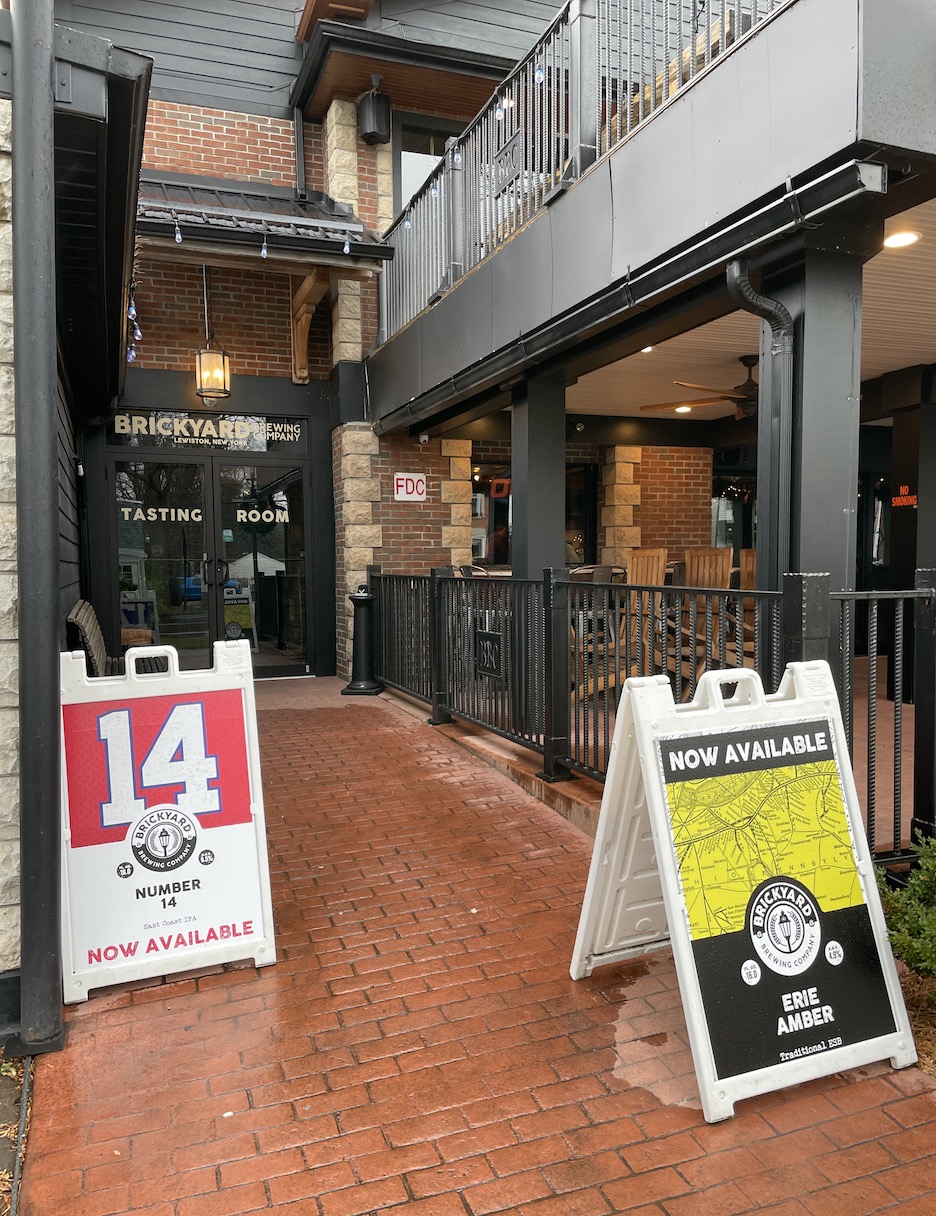 Even a large structure – like the Brickyard Pub & BBQ and its sister site, Brickyard Brewing Company – can benefit from extra promotion.

Restaurant and brewery co-owner Eric Matthews said, “It helps us out a lot. … If you’re a mercantile, or if you have a shop where you’re selling trinkets or selling chairs … they’re putting them out on the street to show people what they sell. We have no way of (doing that). If people drive down the street, and they see ‘Brickyard,’ they don’t know that we’re a brewery and that we have this; we have that.”

He also noted sandwich boards signify where patrons can park for curbside pickup.

“It does help business; I can tell you that right now,” Matthews said.

Trustees agreed to keep relaxing the sign laws while looking for an optimal way to support local businesses. Welch suggested a work session meeting with retailers and restaurateurs.

“I’m not against sandwich boards, if they’re done correctly, and they’re placed correctly,” she said. “When the businesses close, they have to come in. We don’t want them out at night.”

“I’m not totally against sandwich boards at all,” Deputy Mayor Vic Eydt said. “Just getting some uniformity (is necessary). You guys, specifically (the three off Center Street). … I can’t see just saying, ‘No; go back to the old way.’ I don't want to do that.”

Trustee Dan Gibson said, “I’m all in favor of them. Basically, my biggest concern is taking them in at night. Because there’s a lot of people walking around at 2, 3 o’clock in the morning, and they’ve had a couple of cocktails. They trip over it – now it becomes a legal issue. The first thing, they’re going to go after us.”

He also asked for uniformity in frame sizes.

Trustee Tina Coppins said, “I’m good with the sandwich boards, also.” She suggested one per business is sufficient – and with more than that, signs could cancel each other out. 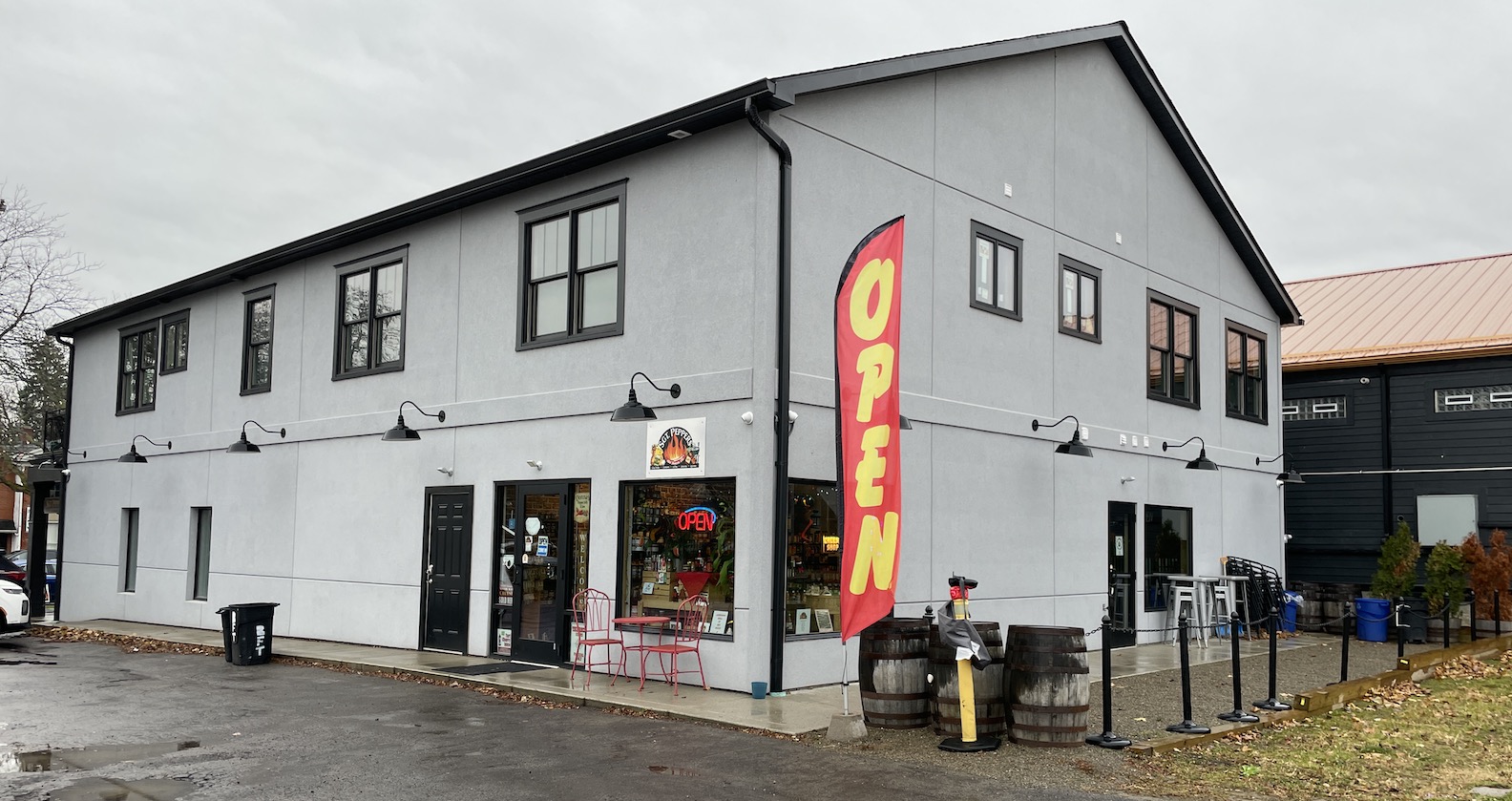 Tenants at 442-444 Center use extra signs to promote their businesses. 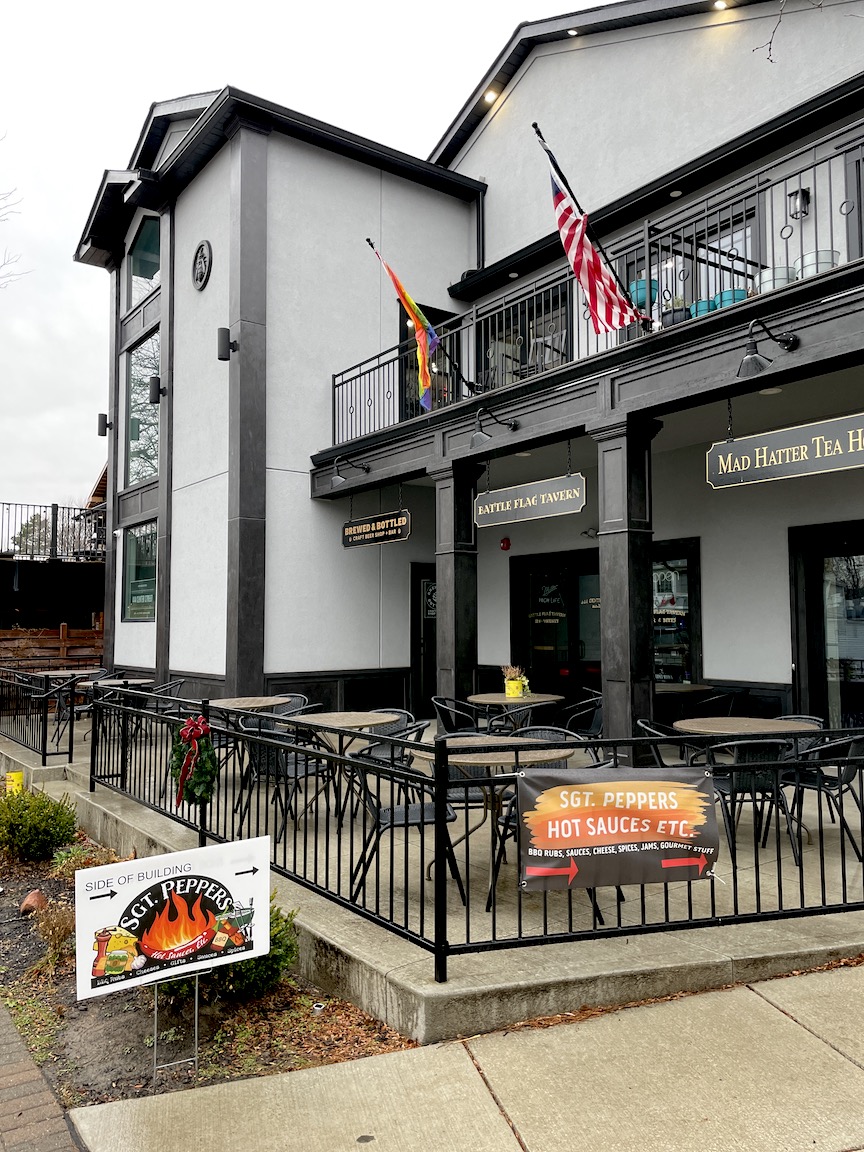 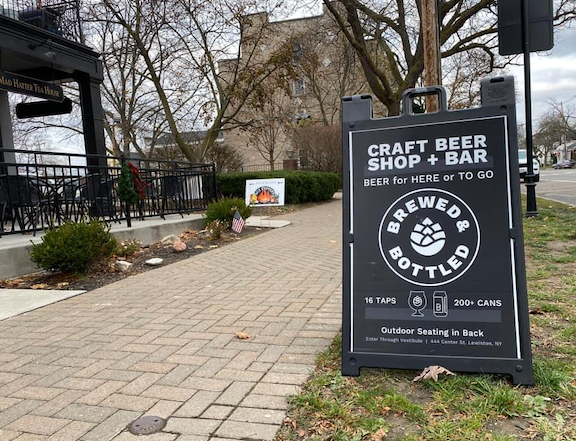