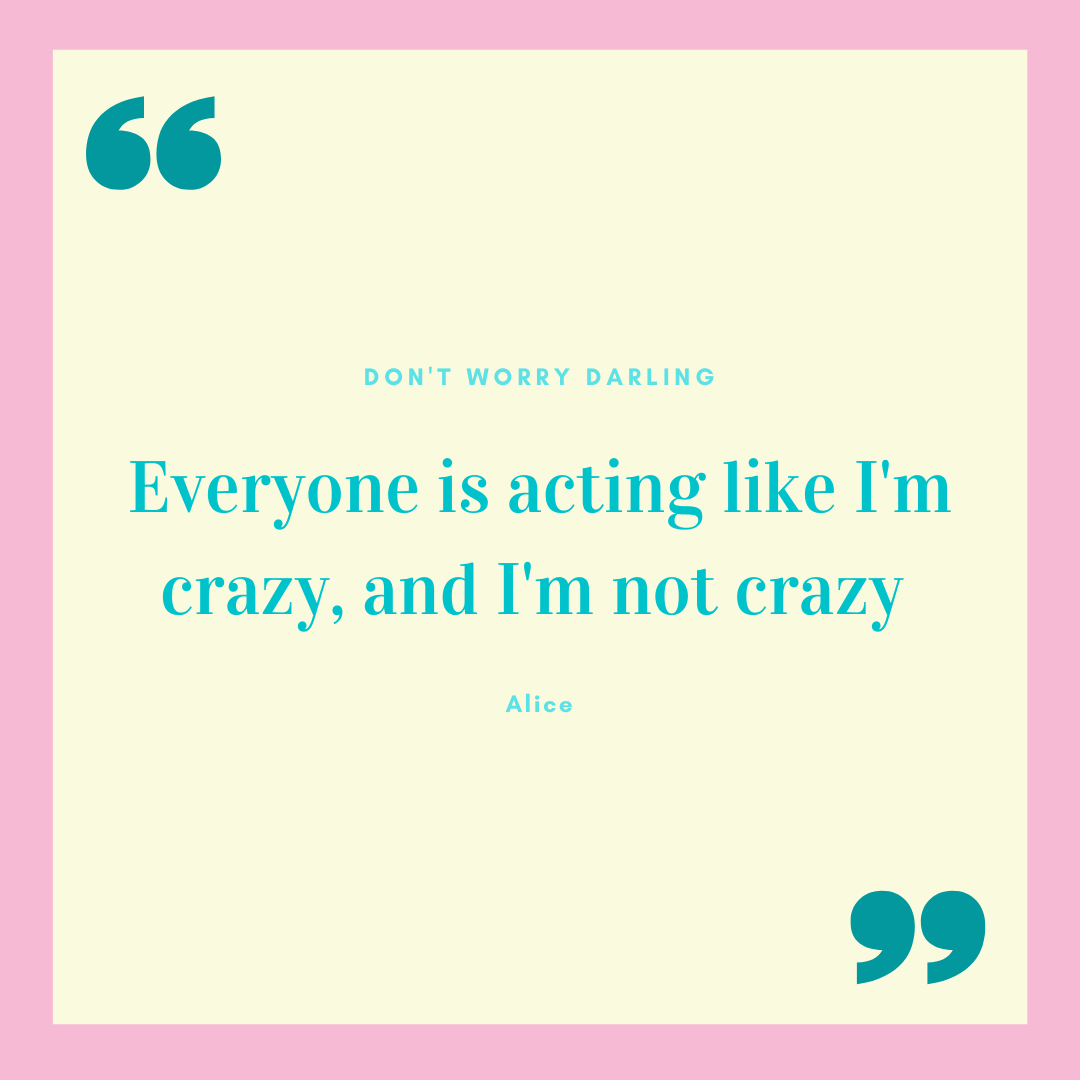 Picture this: the perfect 1950s house, with the perfect husband who has a perfect job, and not a care in the world. Sure, that sounds wonderful … until it’s not.

The “Don’t Worry Darling” synopsis, found on santafe.violentcrown.com, is as follows:

“In the 1950s, Alice and Jack live in the idealized community of Victory, an experimental company town that houses the men who work on a top-secret project. While the husbands toil away, the wives get to enjoy the beauty, luxury and debauchery of their seemingly perfect paradise. However, when cracks in her idyllic life begin to appear, exposing flashes of something sinister lurking below the surface, Alice can't help but question exactly what she's doing in Victory.”

It’s no secret that “Don’t Worry Darling” was one of the most highly anticipated movies of 2022. Whether it was anticipated for its cast, or its storyline still remains to be determined, but one thing is for sure, its reviews range from excellent to tragic.

Some fans were satisfied with the film in its entirety, while others felt as though something was missing.

Audience members entered the movie excited to see the plot unravel, yet the outcome has divided them. Some fans were consumed and entertained by the film, while others were left unsatisfied and more confused after seeing the events play out.

“I liked the movie,” Elizabeth Garland commented, “but I’m a big fan of psychological thrillers. I like testing my brain.”

Kaci Gottler said, “It was confusing because I like knowing the ending of the movie. I like being able to predict the ending.”

“Don’t Worry Darling” is considered a psychological thriller, and for a very just reason.

It gives enough mystery to keep the audience entertained but leaves enough unanswered to really mess with your brain. Because of this, some fans were left unsatisfied.

Gottler and many other fans noted that they would be interested in a sequel to the film. Many factors go into the idea of a sequel. Does the alternate ending affect whether we get a sequel? Are all of the cast members even interested?

For more information on a possible sequel and the alternate ending, take a look at the following sites (warning: spoilers ahead)

√ Will There be a "Don't Worry Darling" Sequel?

Another controversial topic following this movie is why audience members chose to watch it. There’s no doubt that this film featured many talented actors and was casted carefully; however, the main reason that many viewers saw the movie was because it starred fan-favorite Harry Styles.

Styles has become an icon to those of Gen Z. Some began to follow him during his One Direction days, while others discovered him once he began his solo career, but one constant throughout his life in the spotlight is that he has always promoted one thing: kindness.

His most recent tour, “Love on Tour,” has become a space where fans can freely express themselves in every way, ranging from their outfits to what they write on their signs. Styles makes his fans feel heard and supported no matter who they are and what they believe in.

But is his standing reputation enough to create a new blockbuster movie? 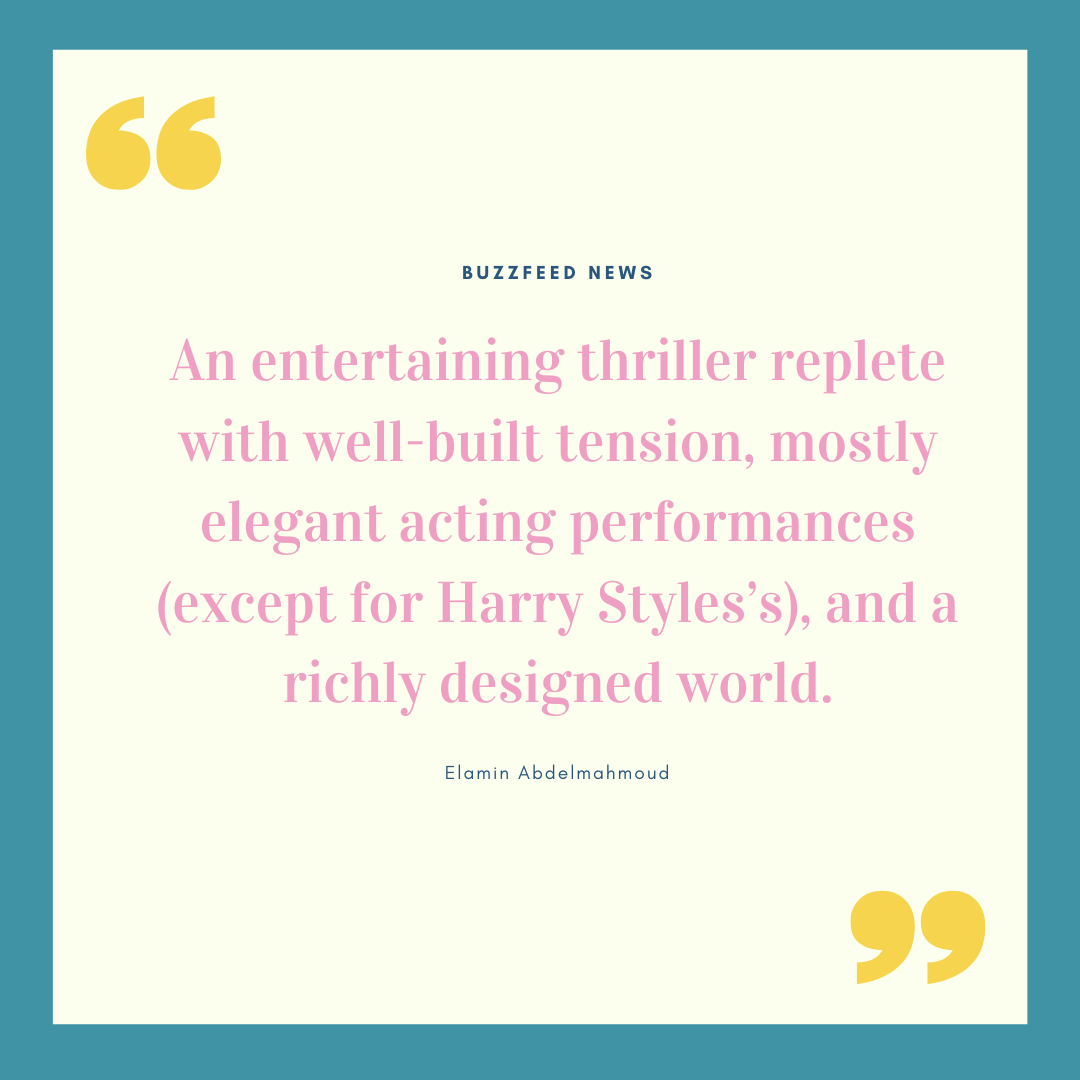 Styles had worked on other smaller movie projects in the past, but this film was the one that seemed to boost his movie career to the next level. Garland and Olivia Noto both agreed that the reason they went to see this movie was because Styles was the star.

So, what does this have to say about the rest of the film?

Many question if Styles was cast in the role of Jack because of his success in the music industry.

Garland said, “I feel like it was based on popularity because that was my reason for seeing the movie; however, I do think he did a good job in his role, and I think that he promoted sales.”

However, Gottler disagrees with Styles’ successful portrayal of Jack.

She said, “He’s been growing a lot in the last year, but I think there could have been someone better to play the part.”

Garland commented on the casting and Wilde’s participation in the film by saying, “I really liked it. I thought it was a little strange that the director gave herself such a large role, she did it well, but I thought it was strange.”

Pugh has also received rave reviews on her leading role as Alice.

According to cinemablend.com, “Christy Lemire of RogerEbert.com calls Florence Pugh a ‘powerhouse,’ noting that her acting next to Styles doesn’t do himself any favors in his first major movie role.”

Of course, every Hollywood success story features a little bit of drama. It has been rumored since the announcement of the film that director Wilde and star Styles were involved in a romantic relationship.

JustJared.com states that the couple met on the set of “Don’t Worry Darling” and began a relationship at some point during the filming process. While fans have been wanting more information, the couple has remained relatively silent about this relationship. Styles is reported to have said that he tries to separate his personal life from his professional life in an interview with “Dazed” magazine.

For more information on Wilde and Styles’ relationship, visit justjared.com.

Along with the Wilde and Styles’ relationship rumors, it also appeared that Styles spit on fellow co-star Chris Pine at the movie’s premiere. While Styles and Pine have repeatedly denied these rumors, no one knows for sure what the story was.

Drama seems to follow those in the spotlight no matter what they do. However, publicity is publicity, whether it’s good or bad. By including these already famous actors in the film, it brings a whole other demographic to the theaters that may have never even thought to give this type of film a chance.

Noto said, “It was good marketing. It made me watch the movie.”